Have I understood the term Honeycomb correctly?

I have done a lot of reading into BDD recently as I try to decide whether it is applicable to a project. I have come across the term Honeycomb (https://skillsmatter.com/skillscasts/10933-sub-second-tdd-with-a-dash-of-honey), which seem to suggest that "end to end" can mean different things depending on whether you are interested in speed or reliability. In one case it may mean the UI (most outer layer) to the Domain Model (most inner layer) and in another case it may just mean the domain model on its own. I cannot find any more information about Honeycomb.

The reason I ask is because I believe it will help us to engage with business analysts and QA. However, I don't want to abuse BDD.

There is a lot of fuzziness around the terms unit test, integration test, and end-to-end test. Some think they overlap and are interchangeable. To some extent this is true.

A major source of confusion comes when people couple the terms to how their implemented. This is wrong. Not every test you write using jUnit, or some such, is a unit test. Using a particular framework or coding style doesn't make it a certain kind of test. It's about what you test. And to a large extent, how what you test performs. 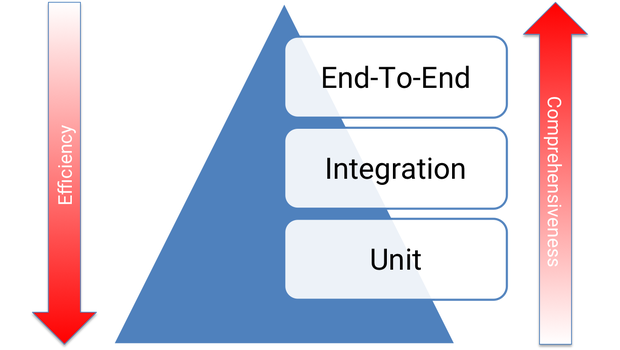 Unit tests can be atomic. That is they test the smallest thing possible to test. Some people only use unit to mean atomic. Which is fine but others set the boundary at speed. They have performance requirements that they insist all their unit tests conform to. Personally I like this second take on the meaning of unit test.

Integration tests seem to overlap this second idea of what a unit test is. After all if two atomic things are involved they must integrate in some way. Others see integration tests as happening across architectural boundaries. These tests don't have the same performance constraints as the unit tests. Again I'm in the second camp.

End-to-end tests in almost every case I've experienced them involve taking a use case from start to finish. Again that overlaps, at least part of, the definition of an integration test. It doesn't have to involve a UI since one might not exist but it might. Especially if you're doing manual testing. Automated testing that involves a UI is notoriously difficult, mostly because UI's are very subject to change. A good practice is to remove all testable logic from the UI so automated testing can drive the application through the API the UI uses as if it was the UI.

Hopefully that way of defining these terms will catch on.

Not the answer you're looking for? Browse other questions tagged c# domain-driven-design bdd or ask your own question.

0
How do you formulate the Domain Model in Domain Driven Design properly (Bounded Contexts, Domains)?
3
When there's no 1-1 mapping between subdomains and bounded contexts?
2
Bounded contexts should contain just domain code?
3
Help understanding modeling in domain-driven design
2
How does an isolated class (or group of isolated classes) fit into a Domain Model?
3
Why does BDD advise an outward in approach to testing?
4
Onion architecture: layer placement of business logic
1
Would I have one domain model (.NET Project) for all consumers or one domain model (.NET Project) per consumer?