Use case causes other use cases

I am making this independent drone control system that a user can start and stop. When the program is started, the connected drone takes off, hovers, and turns to face the other side. At first I though of a use case diagram like this: 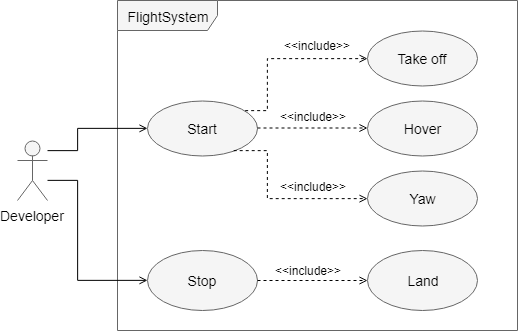 The issue with this is that it seems as if the developer can execute "Take off" etc. even though this is only done by the system. At least, that's how I interpret it from most example use case diagrams. In this other question the included use case was something done solely by the system as well, but was deemed unsuitable for the use case diagram. Therefore,

For example, the main flow of the "Start" use case:

The developer starts the program. The drone takes off. The drone hovers in the air. The drone yaws to face the opposite direction.

Your use case seems correct

Each use case of the system under consideration (your drone system) is:

the description of a set of sequences of actions and variants that a system performs that yield an observable result of value to an actor.
- Ivar Jacobson

Every UC in your diagram comply with this definition.

Adding a FlightController would be incorrect because it's not an actor in the environment of your system, but a part of it.

The only thing I find confusing is the misleading name of Start: the naming suggests that the actor would just have the goal of starting it. But in reality, the goal is to perform a predefined set of actions.

As an alternative, you could nevertheless consider:

The main benefit, is that you could improve the flight logic and make it more complex without loosing the big picture that the use case diagram should provide.

Not the answer you're looking for? Browse other questions tagged uml modeling use-case include or ask your own question.

6
Use case diagram (UML): Should database storage be an sub use case (in this diagram)?