If I want to test frontend code (e.g. react SPA) that queries the backend and I stub out the responses from the backend using sinon fake server/fake XHR, then what happens if the backend code changes?

What are the best practices surrounding this issue?

Note: Apologies if this question has already been answered extensively, which I suspect it has. I cannot seem to figure out the right terms to search if it does exist.

When testing the interface between two parts, the easiest way is to test those parts together, i.e. perform integration tests. If you want to test each part in isolation (i.e., perform component/unit tests) then your tests will contain a duplicate description of this interface, which may diverge from the real interface.

One possible solution is to structure these tests so that these tests can be verified against the real interface. E.g. by recording real interactions, and replaying them during your tests. When you capture an interaction for a web API, you have a HTTP request and response. This is great, because it's easy to replay those with a fake server or client.

If these tests fail, the interface has changed unexpectedly. You must then fix the client or server, and re-record the failing interactions. 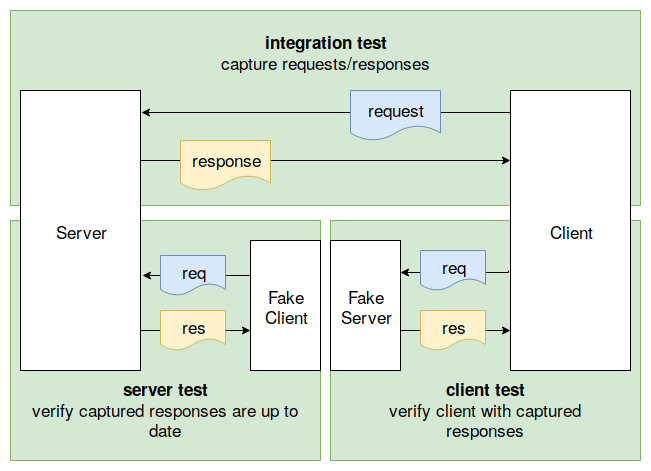 The advantage of using recorded interactions over pure integration tests is that the recordings can be replayed faster, and can be easier to debug. The suite of recordings is shared between the server and client, but both can be developed independently – you do not need to run the client tests when changing the server, as long as the recordings still match.

If this is supposed to work well, you will have to set up some automation for capturing the interactions. Ideally, you can run your client test suite in a recording mode that saves the response when run against the real backend. This doesn't necessarily have to be supported by your test framework, as this recording can be done in a proxy HTTP server. You will also have to strip out irrelevant details such as timestamps, so don't save the raw requests. Often, deleting various headers and filtering the body through some regexes is all that's needed.

4
Reusing Mocks/Stubs as Test Specification
4
Keeping test and release version numbers in sync
2
Test Doubles, Mocks and Stubs - when not to use & why, for Ruby, Rspec
0
How do you detect lying Stubs/Mocks?
6
How well am I writing my tests?
3
Good approach/Strategy to keep integration test database in-sync with production db?
15
Unit testing an API client and wrappers
0
When to use stubs
2
Methods of automated frontend tests
2
Is the distinction between Mocks, Stubs and Fakes useful?