I have a few big services, that uses the same database and tables for managing roles and permissions. Each service ask the database directly for the permissions.

Now I need to build a new service. The idea is to create a centralized service that would handle all permission staff. Afterwards, my team is going to migrate old services from direct database access to using of the new auth service. The whole picture looks like microservices.

It's assumed the auth service will respond with a list of either roles or permissions(not sure yet). It seems to be fine for requests like GET /foo/resources_a/:resource_a_id:. With such request I'd just add a check in the controller.

But how should we use such service when a request for a list of resources of type resource_a comes? I mean requests such as GET /foo/resources_a. Is there a good approach that would omit using the database directly and without big performance degradation?

Hopefully, my thoughts and question are clear.

To summarize my understanding of your question, you want: a centralized service that would handle all permissions and ideally this service would omit using the database directly without big performance degradation.

Let’s first address the type of authorization framework you may use.

The most prevalent authorization framework out there is something called RBAC or role-based access control. RBAC was formalized by NIST, the National Institute of of Standards and Technology. The challenge, in your case, with RBAC, is that it is identity-centric as in it only considers parameters of the user (role, group). You could define a role e.g. manager that would be assigned to a permission e.g. viewDocumentData.

I don’t recommend RBAC because of its limitations. However, if you must use RBAC, you could use a framework (i.e. Spring Security for Java) to abstract security and use getter methods to retrieve information about the user and display it in the UI.

To address this, NIST came up with a new model called ABAC (Attribute Based Access Control). In ABAC, you can now use more metadata / parameters. You can for instance consider:

All these are called attributes. Attributes are the foundation of ABAC, hence the name. You can assemble these attributes into policies. Policies are a bit like the secret sauce of ABAC. Policies can grant and deny access. For instance:

Policies can be used to express advanced scenarios e.g.

There are 2 main syntaxes available to write policies:

ABAC also comes with an architecture to define how the policies will get evaluated and enforced. 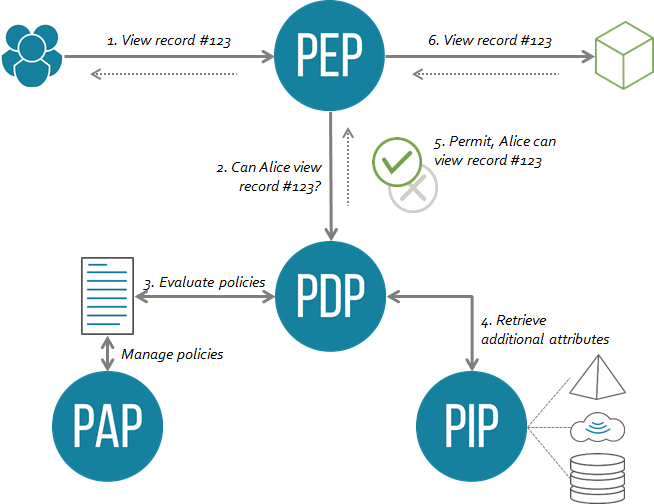 The architecture contains the following components:

XACML can be implemented for any kind of resource, including databases. For a database, however, you will need a proxy to intercept these requests and act as a translator. By doing this, you can implement filtering and masking as granular as you would like.

There are several open-source and commercial implementations of XACML that will allow you to handle all permissions centrally and omit using the database directly. The ease of use will depend on the implementation.

For instance, for relational databases there is Axiomatics Data Access Filter and for HADOOP there is SmartGuard.

Viewing all the permissions of a user is not part of the XACML standard but can be achieved through extending an implementation of it. Axiomatics has achieved this with Axiomatics Reverse Query (ARQ).

Full disclosure - I work for Axiomatics.

Not the answer you're looking for? Browse other questions tagged microservices authorization permissions abac rbac or ask your own question.