I have two screens:

When clicking the "Update" button, it needs to take a decision based on item state and then navigate to either to item update screen or ask user for some confirmation before proceeding.

The item details screen has same "Update" button which has same logic. 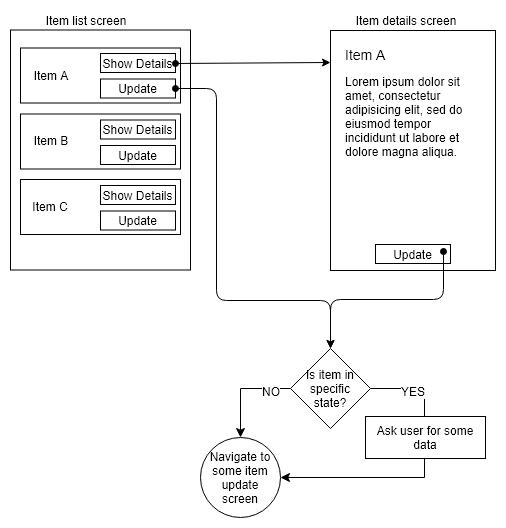 The issue I have is how to implement the view-models in a clean way such that the update logic is not duplicated.

First, I created the view-models for the screens:

For sharing the UpdateCommand, I see the following options:

Note that part of the update logic is navigation. I have an IINavigationService which is injected in view-models. I'd have to pass it to the IItemService if I choose to use it.

I don't know which one is the best and why. Here's some of the concerns I have:

I'd appreciate some advice and reasoning.

The articles\books I could find on MVVM are too simple and don't talk about more complicated scenarios.

I would stick with third option.

The first one is not obvious and smells (imho), coupling is always bad. More than that, what happens if you decide to remove the button from "inner" class? It will break the "outer" one. Coupling should be avoided.

The second one is weird, inheritance should be used to extend some functionality, not to share some code. You have two completely different screens so they dont have parent-child relationship. And again, what if you decide to remove functionality from parent class and keep it in child? You, most likely, will move your implementation to child class, but at that point inheritance would make absolutely no sense at all. If you really like the inheritance idea I recommend you at least create third class, that will be inherited by yours two.

The only issue with third option, as you said, is naming. But this is always an issue. I suggest using name like "ItemUpdateButtonProcessor", this way you won't confuse it with update action itself (imho). I am not familiar with the language you use, so maybe there're some best practices on the topic, but I think you get the idea.

Not the answer you're looking for? Browse other questions tagged design-patterns architecture mvvm or ask your own question.

2
MVVM viewmodel to view correlation in adaptive UI
3
Multi-screen MVVM architecture/design - Should my "screen" ViewModels contain sub-ViewModels?
0
Distinguishing the differences between view model and service layer
4
MVVM Persistence from view model
3
Adding model into another view model's collection
6
Approach for Constructing View Models in Complex MVVM Application
1
How should I Implement a general method that could be used across several view models?
0
MVVM List<T> from Model to View