What would be the downsides of creating a derived interface of interface?

Would there be any downsides of creating sub-interfaces for virtual member functions that have different parameter types? A drawing of this is shown in the image attached.

Apple and Orange do not share similarities and they themselves are interfaces. Making a higher level Fruit interface would run into the same issue of an interface of interface issue.

Is this an anti-pattern? And if so what are some ways to avoid this? 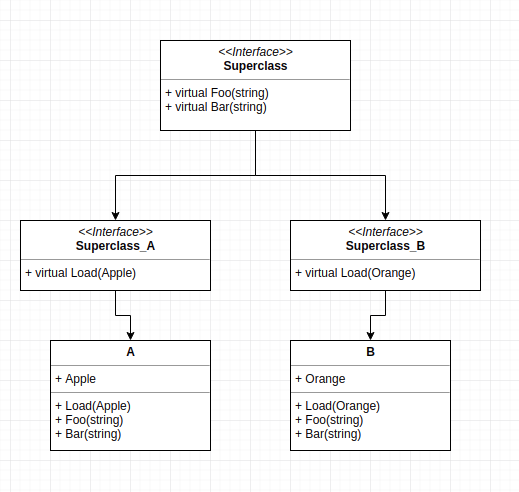 Note: the members included are for simplicity to avoid verbosity. The apple and orange classes are very different classes; hence, they are "apples to oranges" and would share an empty interface.

Clarification: To put the design in a more concrete example, I added the image below. 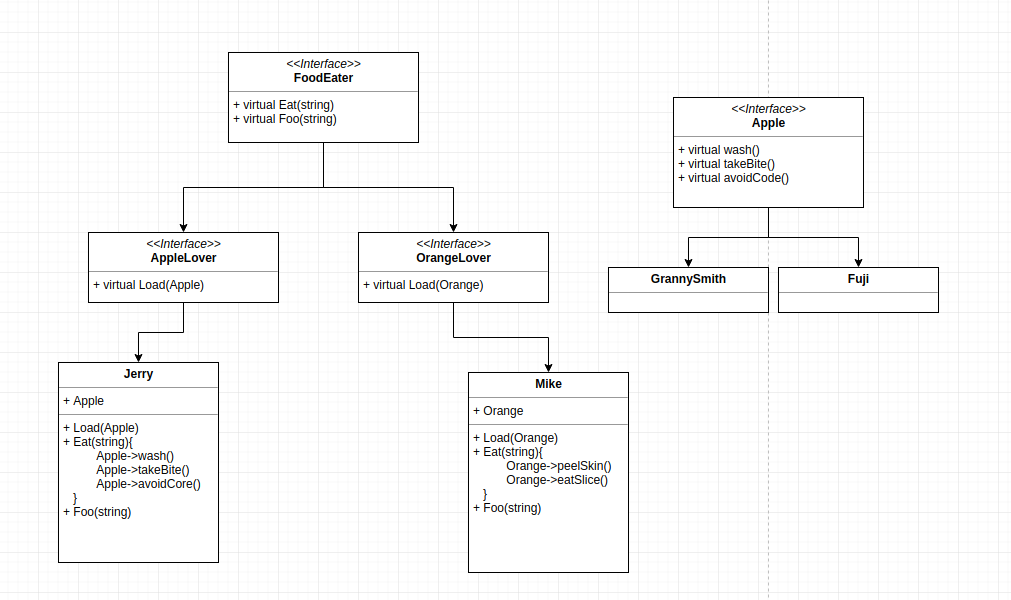 The point of having the sub interfaces is to be able to encapsulate the data loaded into classes that use different private member variable types.

This person will implement Eat() differently than an instance of a Mike.

I'm mostly interested if this is considered poor design practice to have interfaces with inheritance.

On second glance, it may be that the language I am trying to use (C++) doesn't allow this behavior since I am unsure if I could call FoodEater->Load(). I may have to use a template type for a virtual load in the top level superclass.

Building an inheritance tree of interfaces may quickly defeat the purpose of using interfaces in the first place. One major benefit of interfaces is that they allow you to apply type safety independent of any class hierarchy. You may want classes in different class trees to implement the same features. Interfaces are great for this because of their independence on anything. If you start stringing them up together in a rigid tree, you will make them depend on each other and you will have recreated the problem situation you wanted to escape from.

Making one interface descend from another violates the interface segregation principle.

To the reader of your code it would be harder to get an idea of what your class does from the class declaration line. If he sees only the one god-interface that may have inherited other interfaces it will likely not be obvious. Compare

The latter tells you a lot, the former makes you guess at best.

For what I believe you are trying to do, you can't utilize dynamic polymorphism in a context that requires knowledge of the specific types (including subtypes of an interface). You'd have to at least be aware that Jerry is an AppleLover to make a translation of the code you wrote compile:

One practical way to avoid this particular scenario is to generalize Food and create its own interface which operates on generalized FoodEaters like:

In that case you can define different subtypes of food which cause different effects to the food eaters through the generalized interface available for all food eaters. Some foods might heal the eater, others might poison them etc. As long as you can cause all these side effects through a generalized FoodEater interface, then the eat function of Food can cause all these things to happen without any specific knowledge of the specific type involved for a particular FoodEater (without knowing about a Jerry or AppleLover), so to speak. In that case you can do like:

Or vice versa. If everything that can possibly be done with Food can be known through its general interface, then we can do:

Whatever you do, if you want to utilize polymorphism and its benefits (including static polymorphism), then you have to write the code in a way that allows you to generally work with an object without knowing its concrete data type. You have to sort of write the code in the most generalized way possible using the common denominator interface that everything has in common, and that common demoninator interface must be sufficiently complete to do everything you want to do to avoid any need to downcast. You can't necessarily make exceptions to the rule for AppleLovers and so forth without losing some of the generality involved in the code and having to explicitly write it to be aware of this AppleLover type.

Where creating derived interfaces can be more practically useful is when you, say, only upcast from concrete types to the derived interface types before working with a more generalized interface. An example is if you have a particular section of code which is working specifically with AppleLovers and their subtypes like Jerry instances and others with no need to more generally work with FoodEaters (maybe that's a need that comes outside the context). In that case, if the concrete type is known upfront and then we only need the polymorphism on AppleLovers, then such a derived interface might be useful in that particular context when you only need to generalize to that level. There's no downcasting involved, so to speak.

In case this question is raised about why the language is designed this way, ask yourself what Jerry is supposed to do if you try to feed him an orange through the FoodEater interface. There's no code to handle that case, because he's not an OrangeLover and FoodEaters in general haven't been programmed to know what to do with oranges given the way you designed it. I worded that in somewhat of a crude way but hopefully one that sort of clicks and gets some eurekas from someone at student level because it's not a strange design of the language or necessarily something to work around with static polymorphism or any alternative. An interface can only do what it's been programmed to be aware of doing.

What do we already know?

The entire discussion on OOP is beneficial if only:

What is my gut feeling?

Why would we need FoodEater? Or: what benefit do we get by having FoodEater?

Devil's advocate - what harm would we do if we get rid of FoodEater?

What is the harm if we modify the interfaces as such?

Situations where there are no drawbacks

The drawback can be eliminated (by having the concrete implementation be the creator and owner of the adapter), but which requires some boilerplate code. It reduces ambiguity surrounding the use of the adapter, but it does not completely prevent all misuse.

What if we implement an adapter between FoodEater and (Fruit) Lover?

In other words, what if we implement an adapter that covers the methods: Eat(string), Foo(string), and nothing else?

What if we implement an adapter that abstracts over the Load method?

This idea is a twist on the factory method pattern.

Whether this is pointless depend on whether there is a benefit from abstracting over the Load method.

Can we follow the Interface Segregation Principle in C++ as we do in C#?

But how do we write a function that will accept an argument which must implement two or more interfaces?

Suppose we start with these C++ interfaces, by removing inheritances between interfaces and also removing all overlapping methods, according to the Interface Segregation Principle:

And the following concrete implementation:

In C#, we can constrain T as follows:

Given that AppleLoader doesn't inherit from FoodEater, it is possible for one to create a concrete class that implements AppleLoader but not FoodEater. While this is the gist of Interface Segregation Principle, this freedom may be undesirable within this particular scenario.

To prevent mistakes, a comment should be added to the AppleLoader declaration that says "concrete implementations of AppleLoader are expected to also implement FoodEater."

Going back to the LoadAndEat(T t, ...) method. There are several approaches. In approaches 1 and 2, the try-catch block can be simplified by dynamic_cast to a pointer type, in which a cast failure results in a nullptr instead of an exception (std::bad_cast) being thrown.

Other directions to be explored:

Not the answer you're looking for? Browse other questions tagged c++ object-oriented-design interfaces or ask your own question.

12
The term "interface" in C++
7
Apple eating problem
7
What is the correct approach for creating an application around a library?
1
How to figure out what interface to cast to?
5
Why is accessing virtual protected functions of a base class not allowed through a pointer of the base class type inside a derived class
1
C++ design - vector classes with different element types