Suppose we have the following classes: 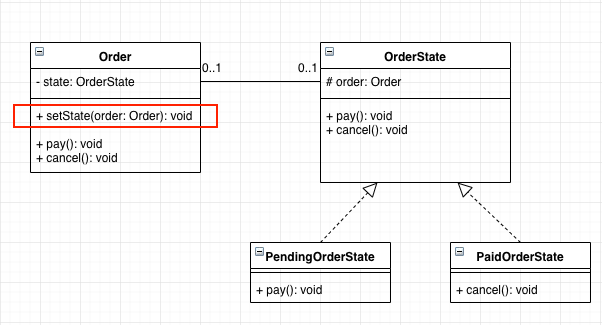 As you see, it's an implementation of the State Pattern.

Basically, the Order class proxies the pay() and cancel() method calls to it's concrete OrderState instance.

After executing their part of business logic, the PendingOrderState and PaidOrderState call setState on the Order instance to switch to other state.

A possible solution that comes to my mind is introducing some kind of OrderWrapper class, that would wrap the Order class and only expose the pay() and cancel() methods.

Sorry for the sloppy attempt at UML :).

Yes, it is a code smell that a "internal" function like setState gets exposed on the public interface of Order.

What you can do about it depends to a large extent on the design of your classes and the facilities that your implementation language provides.

In a language like Java, if Order and the concrete OrderState implementations belong to the same package, then you could give setState the "package private" access specifier, making it clear that only members of the same package are allowed to use that method.

In C++, you could trade the code smell of a too large public API for the code smell of specifying the concrete 'OrderState' implementations as friends of 'Order'. That would make it possible to make setState private, but Order effectively has to know about all states that it can be in, and those state implementations have a very broad access to Order. You would have to choose which solution smells the least to you.

In other languages, there might not be a way to remove the smell and you will have to live with it.

Not the answer you're looking for? Browse other questions tagged design design-patterns object-oriented engineering typescript or ask your own question.

6
Does this implementation of the state pattern make sense?
0
Assigning responsibility for cancelling an Order
3
A condition on an argument used in multiple calls of a method: enforced by caller or by the method?
0
Temporarily modifying object state to save on parameter passing
4
Which design pattern should I use for making 3 objects loosely coupled and encapsulated?
1
Improving the design of state transitions in a business application: the case of cancellation
3
Is there a single word to describe a class with no state and only pure functions?
4
Is there a design pattern for such events with confirmation?
3
Syntactic characterisation of intrinsic and extrinsic states
11
Looking for an effective pattern to cope with switch statements in C#