I have a python CLI tool that my department uses to process some excel file aided by a yaml. I tried to diagram a basic work flow here: 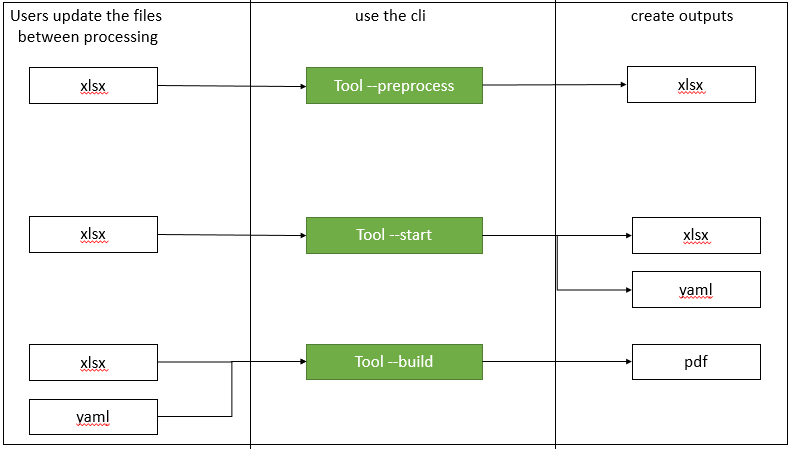 Step 1: User downloads a xlsx, puts it in a file, runs tool --preprocess which takes some inputs A, B, C, and the file name. This step doesn't do anything, see my question below.

Step 2: User runs tool --start where they give the same inputs. However this time it uses their inputs and the xlsx to generate a yaml.

Step 3: User finishes updating the yaml, and runs tool --build which takes just a yaml and a xlsx, and converts it into a giant pdf.

One thing that i've noticed is that some of my users are going to great lengths to make some edits of the files because they are an edge case. For example: They might create some worksheets before using tool --start.

Here's my question: How could I allow users to "hook" into each step, that is, allow them to write a custom python file/function that gets saved in a different file (I don't want to have to custom make everyone's functionality):

Maybe they could push up a file like "A.py" which has def overload_preprocess() and then the tool would import the file and run their function depending on their inputs?

You can dynamically import those files that users made and run the appropriate functions; maybe have a run() function in each.
Have these files provided as input arguments when they run your tool.

Here's an example of such user file:
A.py

Your tool will then parse its arguments and call, let's say, preprocess with the list of user file names.

And your function will import those user files and execute them.

If a user gives a filename, you can do something like this to run arbitrary code:

Not the answer you're looking for? Browse other questions tagged object-oriented python command-line or ask your own question.