Problem in modelling this because too slow calculation (robot football)

I like to build a component connector view / UML diagram for the given problem but I realized it's way too slow if you try to do it exactly as it's given in the following text. My question is what could be optimized? Knowing this I would create the entire diagram myself.

We have 2 teams playing against each other and the aim is that one team scores more goals than the other. Both teams have the same private ressources: 3 robots, a CPU which is able to communicate with each robot bidirectionally but is also able to send broadcasting messages to all robots of its own team. Every robot has its unique circular pattern made up by CMYK colors (4 colors: cyan, magenta, yellow, black) such that it's impossible they can be confused by the soccer field (green) or with other colors (the ball which is orange).

The task of the team CPUs is to determine all positions of robots and ball and also to develop a strategy for the game to inform the robots about it. In order to determine the positions of robots and ball, the CPU needs to process each picture made by the camera, using 4 filters because there are 4 colors (CMYK). Another filter is needed for the orange colored ball. These filters are available for the CPU. But these filters are smaller than the picture taken by the camer: they can only filter 1/3 of it simultaneously. Additionally, each filter needs 500ms to complete all calculations.

The main problem I see here is that the filter needs 500*4*3=6000ms=6s so much time just to determine the positions of the robots, only for 1 picture...! This makes everything else inefficient and the game seems completely unplayable : / How could this be made much faster? I think if I know that I could create the complete component connector view / UML diagram for the problem.

I would suggest the following.

OMG, I don't know how this post got any up-votes. I cringe a bit when I re-read it. I must admit I came home from a late Christmas/early New Year's party and really drunk while keeping the screen left on SE, only to get tempted to use it while extremely intoxicated. I have a bad habit of being completely unfiltered and just saying the first thing that pops into mind when drunk. It's kind of embarrassing but I enjoy drinking too much to give it up, but I should try not to use SE when I'm not sober.

That said, maybe some of it is relevant. I'm wondering if, besides tuning these filters (and using sampling methods that cover multiple pixels at once as a very nice suggestion from Ewan), you might be able to parallelize them (either paralellize the code implementing them or, simpler, unless they need each other's outputs, parallelize running the filters). I don't know what kind of hardware or API restrictions you're working with, but those kinds of times seem really unusable to me and I'd really reach for a profiler to drill down exactly on what sort of lines the times are spent and why (cache misses, etc).

The main problem I see here is that the filter needs 500*4*3=6000ms=6s so much time just to determine the positions of the robots, only for 1 picture...! This makes everything else inefficient and the game seems completely unplayable : / How could this be made much faster? I think if I know that I could create the complete component connector view / UML diagram for the problem.

That last sentence doesn't compute for me. If you need 6 seconds for this filter or whatever, and the players depend on it to do their thing, then I'm not looking to diagrams to solve problems; we're playing Special Olympics soccer at which point we root for Jimmy and hope he doesn't run into a goal post and get a concussion for the 200th time. What's this whole connector view/UML stuff? I'ma reach for a profiler and tune the crap out of that code. It's image processing? Depending on how homogeneous the processing is, you might be able to defer that, or not, to GPU with enormous benefits.

You optimize the hell outta it with profilers in hand and tune the crap out of it to get it to the real-time requirements. If it's third party you file lotsa complaints and flip middle fingers here and there (see Linus Torvalds' response to NVidia for how programmers should behave around problematic third parties).

Only if all those options aren't available, you try to develop a super intelligence which has 6-second reflexes and somehow manages to not be too awful at playing in spite of it, like some awkward foot soldier from outer space which has 6-second reflexes but has a nuclear bomb for its 3-second self-destruction sequence if it can manage to just survive those seconds without being killed. Because 6 seconds is a boatload of time to do computations (that's about 60,000 times more than I usually have), and you might inadvertently create something which passes the Turing test on the way and then it can talk to us and we can discover things about each other and you've basically created a new life form at that point, at which point what's the point of making it play Soccer? Might as well make it cure cancer at that point.

My question is what could be optimized? Knowing this I would create the entire diagram myself.

That's a profiler question, and I don't know what sorta diagrams you'd want to draw in response. I just get rid of the top hotspots if I can, like so from an example session with 100 million polygons. 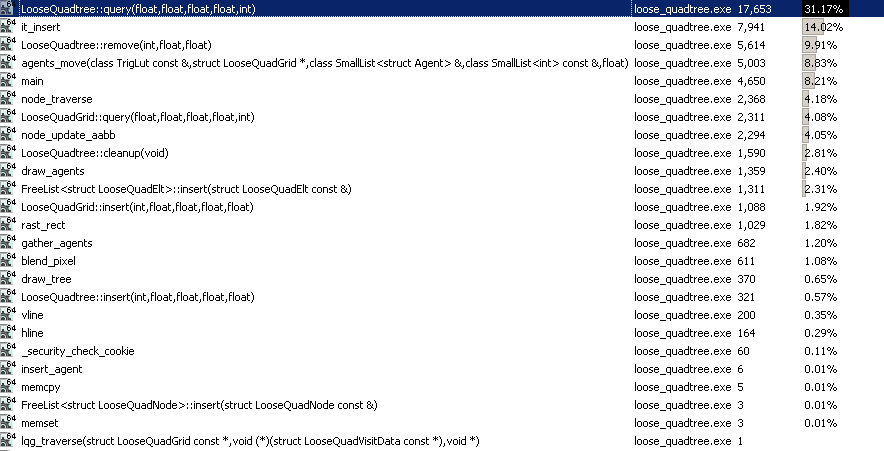 Not the answer you're looking for? Browse other questions tagged design architecture uml optimization or ask your own question.