This is a best practices question for release management of an app. But this scenario is a bit different than what I've been able to find myself.

Essentially my company maintains a fork of its own app. There are two versions of the app that will have different configurations of bug fixes / features. These fixes and features come from a common pool of what's completed. The reason for the two configurations is that there are two main testing environments with different goals.

Let me explain that a bit more with a scenario:

So, as a diagram, the builds could look like this over time (with some added features / bugs from the bulleted scenario above): 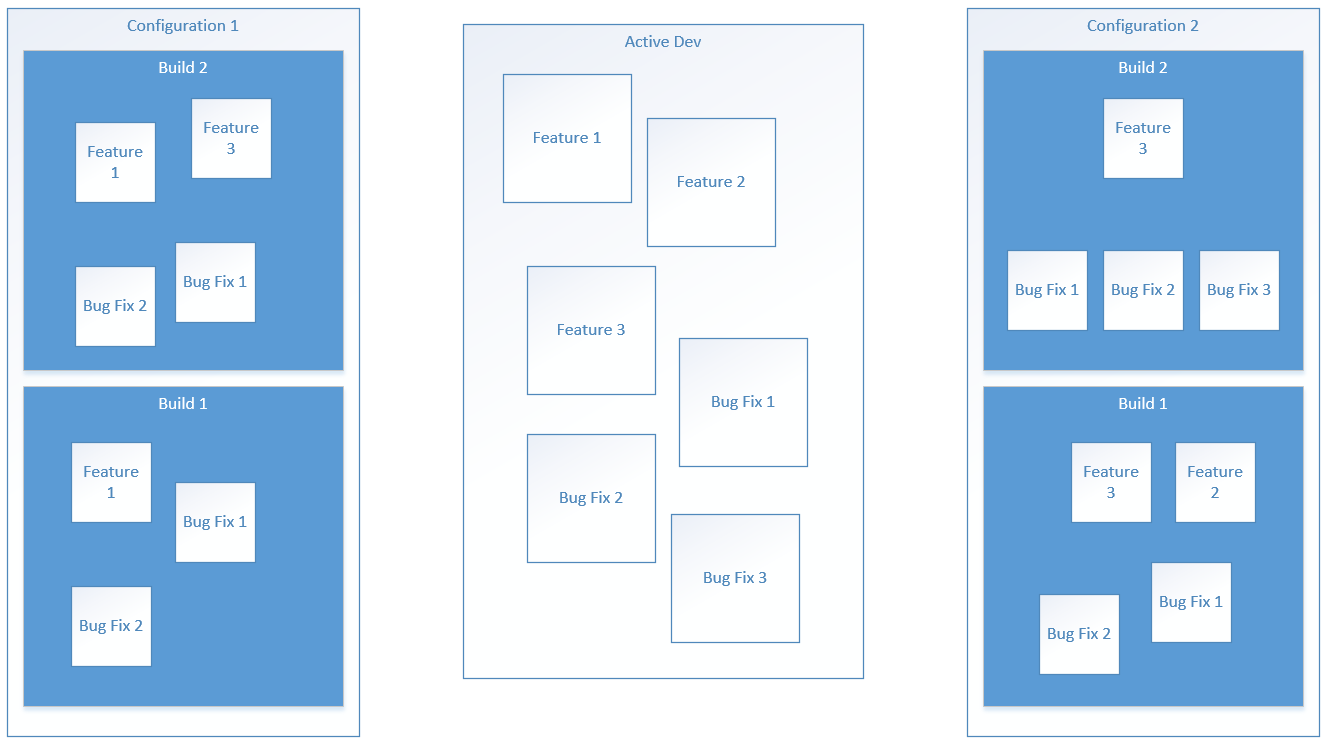 Basically a normal development life cycle, but with twin timelines. There's the main app, and a fork of it that's derived merely by a different combination of the available patches. Patch queues would work well but we use a build server to produce the builds which requires us to publicly push committed changes (as far as I can figure out) to a remote repo.

My question is really about what the easiest way to manage this is, at the actual source control level. What we've done in the past is (using Mercurial) maintain two repositories (one per configuration) and all features / bugs would get imported as needed as patches. Removing items would be done using a variety of ways, backouts probably being the most common. The problem with this is that the two repos ended up wildly different from each other with different items being applied at different times. So the entire changeset stack would be a different order.

What we're thinking about doing, is still maintain two separate repos, but every effort (features, bugs) would be developed as a branch and that branch gets pushed to the repo it's needed in. Within a given repo, if the branch is wanted in the upcoming build, it gets merged in the build branch which is monitored by our Jenkins server and produces the builds.

Is there a better way? An ironed out best practice that prevents messy build branches as a result of backing out items, and possibly even other issues that we don't know about yet?

Single repo with Mercurial Queues for any amount of "configurations"

If all features are just patches on top of common clean code-base, MQ is your best friend: you can have every feature (even as WIP) in separate MQ-patch and apply|unapply when it needed. Because MQ-patches aren't part of repository (FIXME!) and if feature can be developed|used more than one developer, you can also be interested in MQCollab extension in order to share MQ-patches in easy and natural way between different locations

If all your future MQ-patches are independent of others (by design and idea - by code is the responsibility of the end developer), you can use single queue and just change order of patches in it before applying to code

If your patches will have internal dependences (bad idea, but... shit happens), you can separate dependent patches into separate queues with own stack of patches (main+dependent) in each and apply patches not "by patch", but "by full queue"

What we're thinking about doing, is still maintain two separate repos, but every effort (features, bugs) would be developed as a branch and that branch gets pushed to the repo it's needed in.

Congrats, you rediscover "Release Branch" strategy in 2019. And yes, it works in a lot of cases and can work for you too

The problem with removing a feature by changing the source code is that you have no guarantee you haven't broken some other feature due to some shared code.

If you need to switch features on and off then I would suggest "Feature Flags" ie. some config you application reads and uses to know whether a feature, which will still be in the code base should be exposed to the user or not.

There are various tools you can use to help with feature flags such as https://launchdarkly.com/

However, over all I would recommend changing your work practices so that rejecting a feature in QA is something that doesn't happen frequently enough that you need to worry about it.

Any back and forth between dev and test is a time sink and rejected a "done" feature from a release is going to mean a lot of work remerging it with the next set of changes. Its just inefficient.

Not the answer you're looking for? Browse other questions tagged version-control release-management mercurial or ask your own question.

3
Release Management Tools with DVCS (Mercurial)
5
How do distributed version-control systems deal with fragmentation?
0
How do you plan releases with new features in a development / releases branch model?
9
Source control branch design for deployed environments
7
gitflow model with UAT releases is too chaotic, how to simplify?
3
Agile stabilization and release management
8
Semantic versioning with bugfixes and new features in the same release
7
Monorepo vs multi repo for large project with multiple partial deliveries
3
"Support branches" and major tech update