Are there any algorithms related to the following problem that could be usefull for solving it?

I have a convex hull built on some point set. I would like to simplify it (reduce number of points) by still keeping its perimiter (or area) as small as possible. New simplified polygon should not intersect the original hull.

The basic idea I am trying to implement is to calculate for each point of a polygon perimeter added by removal of this point. And then remove the cheapest point (which removal adds minimum value to the perimiter).

So we keep iterating and removing points while added perimiter or area value is suitable and passes some creteria.

When removing point p1 we introduce a new edge formed by previous point p0 and the next point p2. This new edge can be non-optimal or invalid (intersecting the original hull). So I would like to adjust points p0 and p2 along their edges to keep perimeter valid and small as possible.

How can I find these adjusted positions of p0 and p2 ? 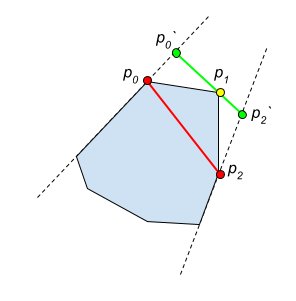 I think my current problem is finding the optimal slope of the new (green) edge. But I am looking forward to any related suggestions and algorithms.

I think this should get you a nice quadratic optimization problem.

In my opinion it is probably easier to only consider adding points, instead of moving points, in this fashion:

For points A, B, C, D, find point B' such that ABCD is contained in AB'D and the area of AB'D is minimal

Finding B' is actually not so hard: Find the intersection of the lines defined by AB and CD, this is B'. replacing ABCD by AB'D adds the area of BB'C to the convex hull.

Then you can, following you initial intuition, greedily optimize by iteratively adding the B' points which add the least area. (or optimize in any other way)

The idea is that we will have a new segment from p0 to p2, and we will move towards p1 until it is ontop of it. This results in a polygon defined by less points, that has more area and that contains all the points the original had. This of course only works for convex polygons, which is what you have.

Edited multiple times, and I now realise this only handles some cases! -- See below

Here's the optimal position for your line: 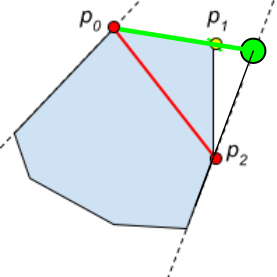 In fact, for the shape you are trying to simplify, those aren't the optimal faces to keep. There's a better way to reduce the number of sides by 1: 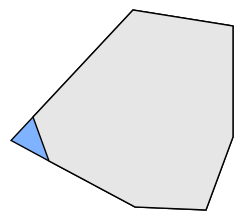 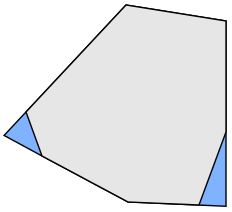 For 4 faces, this is the optimal solution: 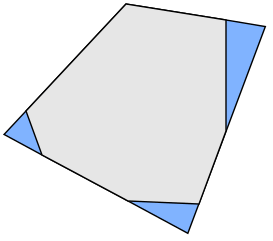 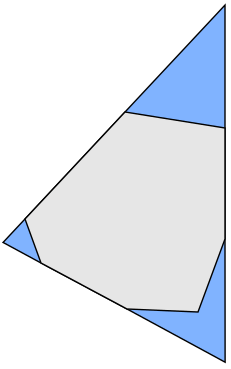 Always you are choosing n faces to retain and possibly extend as outside edges, and simply choosing the best combination of faces to achieve the smallest resulting area.

There are cases that this approach is not optimal for.

For example, let's say we have a simple kite. It's quite clear there are only two possible sides we could drop according to my scheme described above, but there's clearly a better solution than either of those options: 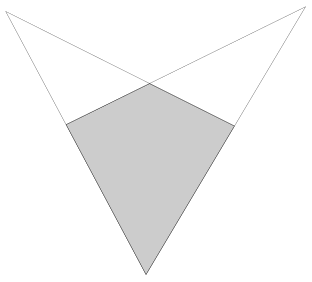 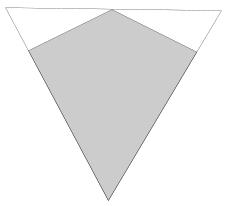 And how would we deal with a rectangle? There are actually no faces we can simply discard, as in my technique above. Yet it is possible, nonetheless, to enclose it in a triangle. 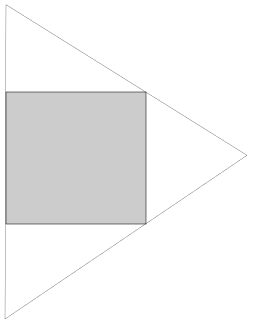 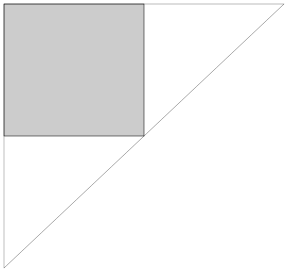 I'll leave this answer here in case it helps toward a partial solution -- and in many cases it will give good results -- but I'm not happy with it as a complete solution.

1
Finding all nearby points in a point cloud
1
What is wrong with my logic for the divide and conquer algorithm for Closest pair problem?
2
Turning n-dim points into m-dim where m<n and where point-to-point distance deviation is minimized
2
Selecting a point inside a non-convex polygon
2
Sequentially/parallel algorithm for extracting blob outer perimeter/contour length
1
Algorithm to "de-rasterize" a voxel image of a polyhedron
4
Algorithm to assign edges to smallest possible polygons?
1
Finite Element Shader