How to model attribute dependency "inside one class" in UML class diagram?

I have the following "software reality in working code" (also no access to it):

It is realized that there are some objects John... of type Class1, so they all have these 4 attributes. They can be set via GUI. The tricky part is: First EnumType has to be chosen. Depending on this choice the possible choices for DataType might be reduced. And the "attribute type" of AttributeValue might differ:

Example: in case of Diction it is possible to have many entries, each entry consisting of two fields with (each independently) entries in the possible data types int | char | double | String | XML. First field could be XML, second could be double. 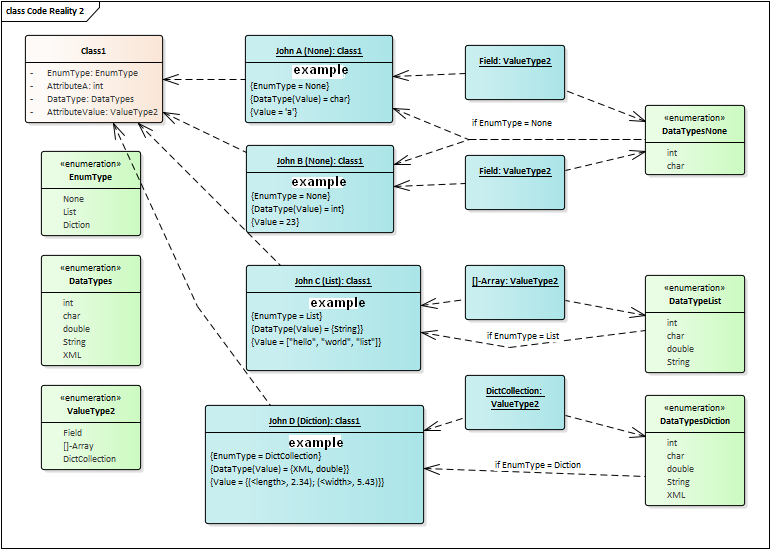 My question: how to model Class1 in UML?

I tried to adopt it to my case. Either it is not mentioned or I don't understand it. It sounded like the derived property is what I'm looking for ... just it is not a simple concatenation or calculation. Does it still takes effect?

Additional info: this Class1 also needs to be used in another class as data type of attributes over there as well - just in case that is relevant to ensure that while using it as data type the class structure and inner dependencies are coming into affect.

I tried this approach:

This approach has some issues: 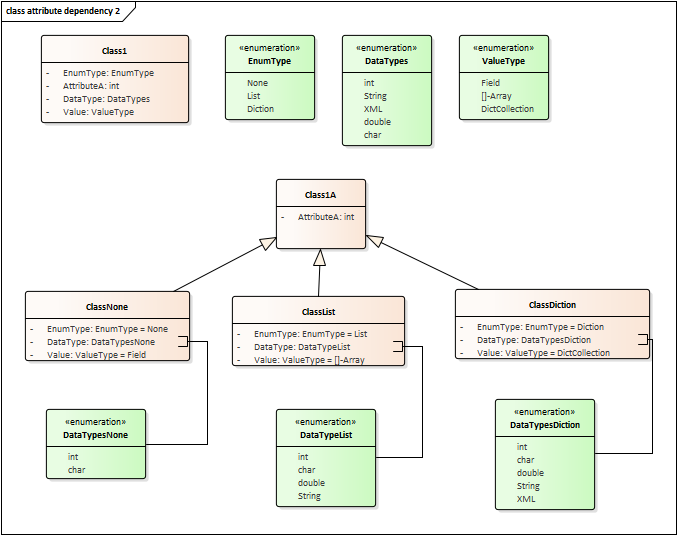 Your 'EnumType' is acting as a type in the same layer as the instance it is controlling; this crossing of layers is not directly supported in UML. If you want to represent it, you need to work in a different formalisation, where types and instances can co-exist in the same model.

This does not prevent you creating informal work-arounds, such as using extensive rather than intensive classifiers as Ister gives examples of.

You are going in the right direction with the 3 subclasses. Let's combine that with derived attributes and redefines method to get desired effect.

If the property is derived, its value can be calculated from other attributes (including the information which specific subclass are we in. This is not directly mentioned in the UML Specification but comes as a logical consequence).

If the property in child redefines property from parent it usually specifies it in more details. One of obvious possible redefinitions is the change of attribute data type. In this case the change will be from broader (complete) enum to a narrower one.

Since all subclasses have to have all the attributes, keep them in the parent class Class1 (which by the way should be abstract)

Now the values for attributes EnumType and AttributeValue depend strictly on the subclass chosen, so it means these are derived attributes. Also since it cannot change within the subclass, you can set it on the subclasses to ReadOnly and provide the default value effectively enforcing this specific value.

For DataType you have 3 enumerators, one (DataTypes) with the broadest list and two that are specialised versions of DataTypes, each narrowing the list further (respectively DataTypesList and DataTypesNone). You may want to show this specialisation with respective generalization relationship.

The type of attribute DataType for ClassDiction remains the broadest version, so you do not need to change anything there. On the other two child classes you redefine the DataType with the narrower enumeration.

As a result you get the following diagram:

Note that while this diagram accurately depicts what you have described, it's using a bit more advanced UML. Always consider who is going to read the diagram. Sometimes it's better to add just some textual description (either supplementary or as a text annotation/constraint) rather than depict accurately to ensure that all recipients will understand the message.

Not the answer you're looking for? Browse other questions tagged uml dependencies class-diagram or ask your own question.