What is late binding?

I know, there are lots of sources on the internet, but I do not understand them.

Wikipedia: "Late binding, dynamic binding, or dynamic linkage is a computer programming mechanism in which the method being called upon an object or the function being called with arguments is looked up by name at runtime".

The function "b" and the calling of it is compiled into the following:

The function is called by address, not by name.

How to understand, what late binding is?

Dynamic dispatch in C++, Java, and C# is done via tables — that map a slot position or index to a function pointer — rather than by name.  Names are resolved at compile time, and they are assigned slots in tables as needed.  In your case, virtual b introduces a virtual method, which allocates a new slot in what's called the vtable (virtual dispatch table) for class a.  An override of b in a subclass of class a would share that same slot (the index/position): it is that slot sharing that implements dynamic dispatch in these languages.  The actual instance type determines which table to use and the slot position for lookup comes from the particular method being invoked.

Your example is too simple, however.  The variable in question has an exact type, so the compiler knows up front which method to call.  While it could use the dynamic dispatch mechanism, there's no reason to do it here since there is only one possible answer of what function to call.  And while the larger program does not necessarily preclude subclasses of class a, the compiler knows that the type of variable d is exactly class a and not any such subclass. Further, such compiler optimization can be done with local analysis rather than requiring any complicated whole program analysis.

Perhaps if you wrote a function that took a reference or pointer to an a and then called b on that, the compiler would have to allow for the possible existence of other subclasses, and as well that such parameter could be one of those subclasses, not just an exact a instance.

(However, be aware that compilers can use stubs as well, and these stubs can hide some of the dispatch from the direct line of generated code in the method, possibly making them look like direct calls by address at first glance.  While not the case in your example, I just mention that things aren't always as the seem.)

There are several types of binding and "late binding" may refer to several different things, depending on the technology and the context. It may be helpful to avoid the word "late" (and its opposite, early binding) and focus on specific types of bindings.

Compile-time binding means that a symbol or entry point is bound to a specific address when the code is compiled. This is actually pretty rare because addresses tend to be moveable in modern operating systems. It common mostly in firmware and low level type code projects.

Load-time binding means that a symbol or entry point is bound when then code is loaded into memory. The symbol is typically associated with an offset that is added to a base address chosen by the operating system. This type of binding is what people usually mean when they say "early binding" when talking about c++. This type of binding is very, very common in older binary executables.

VMT binding means that calls to a method will go through a run-time virtual method table or VMT. A copy of the table is associated with the class, and each object reference refers to the copy. When you call an object's methods, the runtime locates the appropriate table for the object, then locates the appropriate entry in the table for the method (not necessarily by method name; it is usually by ordinal position). By using the table, an object in C++ can mix and match addresses from a base class with a derived class, allowing for run-time polymoprhism. This is what object-oriented folks mean when they say "late binding."

Dispatch binding. In a COM (Component Object Model) context, "early" binding actually refers to VMT binding (which is called late binding outside the COM world). True early binding is not possible with COM. The term "Late binding" in a COM context refers to dispatch binding, a process where the entry point is retrieved by interrogating an interface with the symbol name.

Reflection is another type of binding in .NET applications where the entry point is determined by interrogating the type system with the symbol name. This type of binding might be thought of as "late late binding" because it is even less efficient than traditional late binding.

All that being said, I believe people tend to use the term "late binding" to refer to a situation where a mismatch between type and call does not cause a compile-time error, i.e. they mean any type of binding that could fail at run-time. Any of the above could fail at runtime other than compile-time and load-time binding.

First, let's start with a short demonstration of what late binding is, does, and accomplishes:

When we invoke g, the function that gets invoked is determined by the type of the pointer (or reference) we start from. So, if we use a pointer to base, we invoke the base class function, and if we use a pointer to derived, we invoke the derived class function. So, being non-virtual, g is early-bound. That means the function that will be invoked is determined at compile time based solely upon the type of the pointer being used.

As to how this is done: at least in C++, it's normally done using a vtable. When you invoke a member function, your function receives a hidden parameter named this. If the class defines (non-static) member variables, those variables are accessed by taking an offset from the address in the this pointer--i.e., a pointer to the data storage for the object. If the class contains at least one virtual function, the object will also contain a (hidden) pointer to a vtable for that class. So let's consider code like this:

This will typically be laid out in memory something like this: 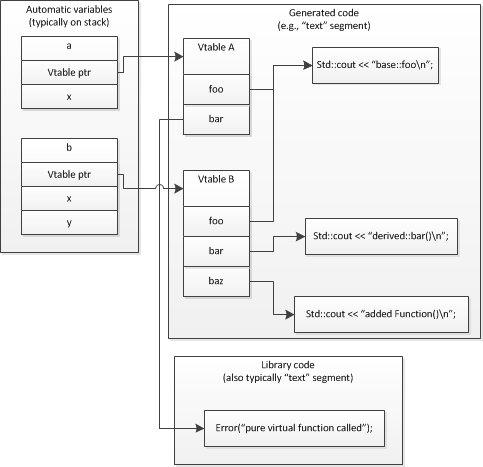 Not the answer you're looking for? Browse other questions tagged c++ c++11 binding c++14 or ask your own question.

11
Why binding is not a native feature in most of the languages?
0
About languages strongly typed with late binding, do they make sense?
1
How are Implicit-Heap dynamic Storage Binding and Dynamic type binding similar?
0
Java Dynamic Binding
3
Why lambda/closures expressions came so late to C++?
3
In C++, how to call an 'init' routine as a class is loaded?
10
In C++, why shouldn't all function parameters be references?
0
For what reasons would you use AngularJS expression (&) binding instead of using events?
0
Capture by value/reference and early/late binding