I have been learning to create water waves in a mesh from a paper commonly known as the Tessendorf paper. Which is quite well known.

But those who don't know this is the equations it mentions in the paper:

Page 4 right column for this equation.

I apply this algorithm to my flat mesh: 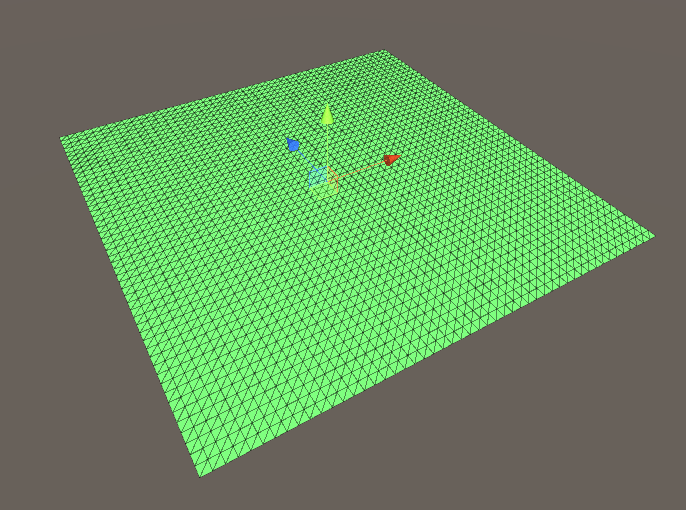 The issue is when you have more than one wave in the summation (below image is 2 waves) the final result shows the mesh penetrating through itself at the crests of the waves, and its nearly impossible to have more than one gerstner wave before this happens, i've tried many values and its rarely every not doing it:

Is there any mistakes in my interpretation of the algorithm, i don't know why it keeps happening !? The colour just represents the direction of the normals.

See the discussion here in GPU Gems (scroll down a bit to the Gerstner Waves section).

The relevant bit is this:

When the sum Qi x wi x Ai is greater than 1, the z component of our normal can go negative at the peaks, as our wave loops over itself. As long as we select our Qi such that this sum is always less than or equal to 1, we will form sharp peaks but never loops.

They formulate the waves this way:

Note that all the expressions on the right are for components, so the "⨯" is just ordinary multiplication, while the "•" is the dot product.

Comparing that to what you have, in GPU Gems notation, x & y are the two components of Tessendorf's x0 vector, while GPU Gems P.z is Tessendorf's y-displacement, with the sin and cos switched up (this doesn't matter) and some signs changed (this just changes the direction).

So, with some guesswork, we can write down a translation table of sorts between the two (Tessendorf's notation on the left), for the relevant inputs/parameters:

So, if I'm not mistaken, GPU Gems' (rearranged) expression

Note that with the introduction of Qi in GPU Gems, what they are really doing is using a different amplitude for the horizontal displacement that they can control separately (wheres the Tessendorf paper uses the same for both horizontal and vertical); i.e. Qi doesn't appear in their P.z - so you may want to try something similar. Intuitively, the Qi parameter "controls the steepness of the waves":

In fact, we can leave the specification of Q as a "steepness" parameter for the production artist, allowing a range of 0 to 1, and using Qi = Q/(wi Ai x numWaves) to vary from totally smooth waves to the sharpest waves we can produce.

So you can have an overall Q, and set up each Qi in such a way that the overall sum is:

BTW, I haven't tried/tested this, so while it's possible that I've overlooked something, hopefully it's good enough to let you figure it out.

Not the answer you're looking for? Browse other questions tagged c# algorithms math or ask your own question.

7
TEA algorithm constant 0x9e3779b9 said to be derived from golden ratio, but the golden number is 1.618?
5
All possible solutions to equation, where operators are arbitrary?
1
Minimizing use of paper
3
Algorithm to calculate trajectories from vector field
6
Detecting surface faces of a huge 3D mesh/grid
2
Storing a straight line equation
1
Parnas' Paper on Modularization and Workflow Engines