I know some languages (C comes to mind) its best to declare as few variables as possible. In a language with memory management like C# is it better practice to continue with this philosophy or should I be declaring unnecessary variables if it improvese readability?

Or: Simply plugging in Values into ConnectToDB

Personally I think the first option is better because the shorter line length allows for improved readability, but I am wondering if this is bad practice.

We can speculate on whether those extra variable affect performance. But it's far better to find out, rather than speculating. So use tools available to you, such as Roslyn and profilers to determine it. For example, compare the resultant assembler for your first example, compared with your second version.

Regarding the other part of your question: readability. The problem with readability is that folk all too easily focus on the minutia, such as extra variables, whitespace etc and in the process miss the elephant in the room. Readability is just one component of code quality. And as Thom Holwerda put it, quality can be expressed as being inversely proportional to the number of WTFs/minute: 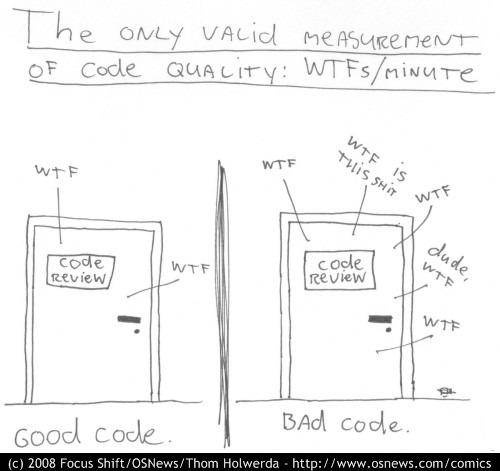 And the I see two glaring quality issues with your code that make me go "WTF!".

Firstly, you have a flag parameter that, depending on its state, causes your method to do one of two things. Using a boolean in this way is a well documented code smell, eg here, here, here etc. That boolean is telling me, and should be telling you, that you need two methods here as you are doing two completely different things.

By fixing those two issues, your original question becomes academic as we now have those items named in the parameter lists, no local variables needed. And then, rather than create monthlyPerformanceTable, pass it to other methods for them to modify and return it, let those other methods create and return a DataTable. And we end up with:

Why? Because a names one and only job is to be descriptive, no matter how long that makes it. Never shorten a name for the sake of a one liner. Find a better way to lay out your code.

The cost of additional variables is small, so unless this is happening inside a performance-critical loop that needs to be tightly optimized, I'd always go for readability. Note that in C# most things are reference types, so you're not allocating/copying more than a pointer unless it's a large struct.

The example you give is interesting, because if this wasn't in a using statement I wouldn't consider the temporary variables necessary; the fields they come from are already equally as descriptive.

But given that multi-line using looks rather ugly, I'd say they're an improvement in this case.

Readability goes first, unless it noticeably hurts performance. (Simply because 80% of our time we are reading the code)

Another approach to your particular sample.
All required data for connection in one class PerformanceDBDataObject, so we can "hide" implementation details of how to create a connection behind a method

Look now it's probably can fit into one line and consumer's code will look much more readable without extra implementation details.

In case both are static classes, you can create one static method to create a connection

Not the answer you're looking for? Browse other questions tagged c# object-oriented-design clean-code or ask your own question.

64
How to write correct loops?
64
Readability versus maintainability, special case of writing nested function calls
24
Is readability a valid reason to not use const in (reference) parameters?