Is it okay to have a class where some attributes won't always be used?

I'm designing an app which use a Knowledge Base filled with rules. Depending on the context some rules will be applicable and others will not.

I thought of having a KnowledgeBase object containing a list of all rules with two empty attributes for applicable and non applicable rules at the creation of the object. When created, I only need the full list of rules without context being necessary. 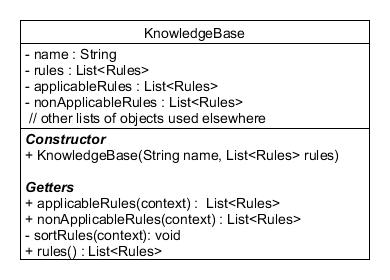 I don't give more details about the context because id doesn't matter.

The programming language doesn't matters, I'm just trying to know if the concept is okay

So is it a good way to do things or is this just awful ?

Any time we have instance fields that are unused in one scenario or another, this suggests that we are conflating separate objects into one.

Ideally, all the instance fields of a single object have the same lifetime — namely that of the object itself.

So when we have instance fields that have differentiated lifetimes, this indicates that logically we have several different types.

Your context parameter is problematic, since it is only consulted the first time it is passed, and otherwise goes unused (instead deferring to the original).  For naive consuming clients, this means unexpected results when they use another context.  (We should provide interfaces and abstractions for naive clients, so that consumption leads to falling into the pit of success.)

(Again, there appears to be a lifetime issue here, and this time it suggests that the context parameter belongs in the constructor.)

Sure, you can program like this but better practices are available if you want to write a larger code base and/or maintainable code.

We don't know why you are concerned with memory consumption or optimization at this point in your project, but the common wisdom is that your code maintainability is more important and that performance should be a lessor concern until you actually run into measurable performance problems.  Almost always, performance problems appear in unexpected places, so solving them before measuring is generally not worthwhile.

(I would also assert that in the long run, it would be easier to reason over and improve the performance of code that avoids unexpected behaviors like mixing different lifetimes in a single object.)

TBH this is just awful. The additional slots are used as a kind of context-specific cache, but this cache is not invalidated when another context is used. Unsetting the rules slot is not really necessary (saved memory is probably negligible) but could be dangerous.

Much safer would be to have an explicit cache keyed by (knowledgeBase, context) storing the applicable and inapplicable rules for each pair.

Its fine. You have a thing called a Knowledge Base. It needs two types of rules. These aren't unused attributes, they are attributes that aren't used at the same time.

In your specific case, since you never need both sets of rules loaded at once, you can probably get away with a single var to hold both. You also mention memory optimization. I would not worry about that unless you know it will be an issue.

39
Documentation in OOP should avoid specifying whether or not a “getter” performs any computation?
5
Requring static class setter to be called before constructor, bad design?
4
Software design: too many static objects?
0
Should I rather pass strings or objects to DropDownList?
0
Design implication of using spreadsheets for engine rules
0
Create object just to call a function in PHP. Is it as bad as I think ? How to redesign?
4
Design pattern for selecting data
0
How to design a system that can operate and replay its functions call stack?