Would this system be considered decentralized or distributed?

I am currently working on a report regarding a matrix multiplication distribution system I have been working on. But after reading a lot of somewhat contradictory sources online I have become in doubt whether the network created by the system would classify as being decentralized or distributed.

As I have attempted to illustrate below it essentially uses a master/slave model but in addition masters may also serve as slaves for other master or themselves simultaneously. A master carries out jobs, which are equations that uses matrix multiplication, by partitioning them into tasks, that is a subset of the original equation. An example would be the equation: A*B*C*D*E*F, which could be partitioned into the following tasks: A*B, C*D and E*F. The tasks are then distributed and computed across the master's slaves. Once the master has received the result from each tasks they may produce a final result, ending the job. 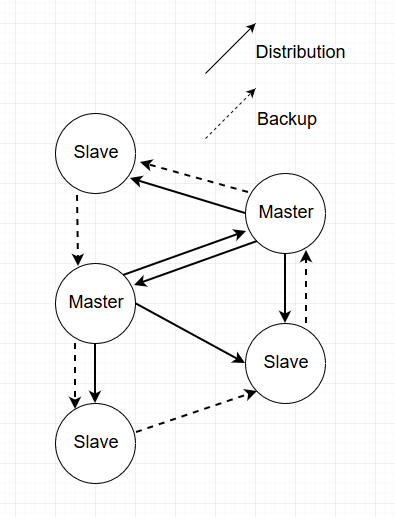 To my understanding a decentralized network is one which features multiple centers of communication in form "central nodes". But, although I cannot find anyone specifying it, it seems to me that there cannot be any overlap in the nodes associated to the central nodes, which is the case in our network. At the same time it does not feel completely distributed either since each master is working in a centralized manner.

How would you classify it?

EDIT: In addition to the aforementioned distribution the system also maintains a "backup ring" that is every node has a dedicated backup node. In the case of a master, their backup node is essentially a standby-master. The master will periodically dump the state of it's job(s) to their dedicated backup node. The state of a job contains the tasks, results and who their slaves/workers are. In case a master fails the backup node will continue maintaining the jobs (from the state they were last synchronized). Since a slave does not maintain any jobs they do not synchronize anything with their backup node. But, in case they are backing up a failing master, they themselves will become the new master. The image has also been updated accordingly.

If I query a decentralized system at my home computer I'm not centralizing it I'm just asking for a result. Same with your master.

The key feature of a decentralized system is partition tolerance. Any small part of it can go down or loose connectivity and the rest keeps working. Centralized systems tend to have single points of failure. You take this one part down, the whole thing fails.

I simply can't tell which your system is from your description because masters and slaves could exist in the same node and only that node, creating a single point of failure.

Not the answer you're looking for? Browse other questions tagged distributed-computing distributed-system or ask your own question.