For a number like 37, the parse tree would be: 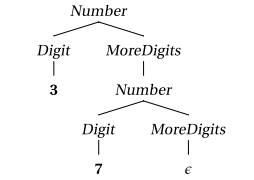 Now here is the part that confuses me. If we replaced the first rule Number ::⇒ Digit MoreDigits in the whole numbers grammar with: Number ::⇒ MoreDigits Digit, I would think that this would lead to a Circular definition. Instead it is said to lead to: 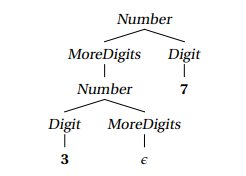 If we replaced the first rule Number ::⇒ Digit MoreDigits in the whole numbers grammar with: Number ::⇒ MoreDigits Digit, I would think that this would lead to a Circular definition.

A grammar describing something that can repeat an indefinite number of times has to be circular. Circularity isn't bad in this context because the grammar isn't a program where something follows the path through it as if each reference to a nonterminal is a function call. Rather, the grammar is driven by the tokens in the input stream, which means the state machine that runs it is only going to traverse the path dictated by the tokens. Of course, if the input is an infinite stream of valid tokens, the parser will run forever and the effect is the same, but that really wasn't the intended use.

While repetitive, grammars are often easier to understand when repeating terms refer to themselves rather than to the terms that refer to them (not to mention that a non-forward-referencing grammar can be analyzed in a single pass):

Changing the order of the terms as shown in the example has no effect on the language but, as you noticed, does change the parsed representation. In less-theoretical terms, this is important because the path to producing the MoreDigits Digit parse tree requires lookahead down the entire Number term where the opposite can happily consume it a token at a time.

As pointed out in the comments, it's a mistake in the diagram. There are no terms in that version of the grammar that would make that ordering possible.

Not the answer you're looking for? Browse other questions tagged language-design parsing syntax or ask your own question.

12
Question about Creating a Scripting Language
7
Parser combinator that looks like BNF
16
In hindsight, is basing XAML on XML a mistake or a good approach?
5
What is this algorithm for converting strings into numbers called?
4
Question about Java nested classes design decision
0
Derivations in BNF
3
How to parse different number types with LALR(1)
0
Is it possible to parse my grammar with multi-line productions without backtracking?
4
Right way to read from token list to implement parse tree