How to merge object nodes in an activity diagram?

I have the following simple activity diagram: 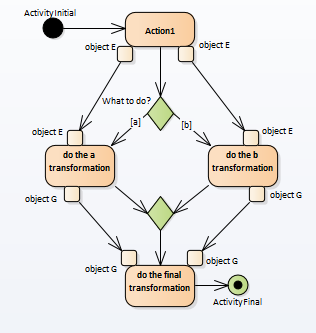 My problem / question about is the last activity and its incoming object flows:

An object token is a container for a value that flows over ObjectFlow edges [...]. An object token with no value in it is called a null token. [...] Each token is distinct from any other, even if it contains the same value as another.

Object tokens pass over ObjectFlows, carrying data through an Activity via their values, or carrying no data (null tokens). A null token can still be passed along an ObjectFlow and used like any other token.

A MergeNode is a control node that brings together multiple flows without synchronization. [...] if the outgoing edge is an ObjectFlow, then all incoming edges must be ObjectFlows

The multiplicity bounds on a Pin constrain the total number of values that may be input or output by a single execution of an Action, not the number of tokens it contains (see the upperBound property inherited from ObjectNode). A Pin may hold null tokens that contain no values. [...] An Action cannot start execution if one of its InputPins has fewer values than the lower multiplicity of that InputPin.

Executing an Action in an Activity requires all of its InputPins to be offered all necessary tokens, as specified by their minimum multiplicity (except for the special cases of ActionInputPins and ValuePins, as discussed above).

I understand it that way, that my model is currently wrong - because it is impossible to have both object G as input due to the decision before.

So I have to reduce the object flows to 1 to succeed.

That seems to give me these options:

Then there is more in spec:

[...] It accepts all object tokens offered to it on all incoming flows, which are then held by the node. Held object tokens are offered to outgoing flows [...]. When an offer for a token is accepted by a downstream object node, that token is removed from the CentralBufferNode and moved to the accepting object node, as for any object node.

my modeling tool now offers only Dependency, Trace and Information Flow (2) - no object flow to the receiving Action Pin. All I could get is an object flow (1) to the related action. Which misses the visualization - might it be necessary because an action pin is unable to accept a token? 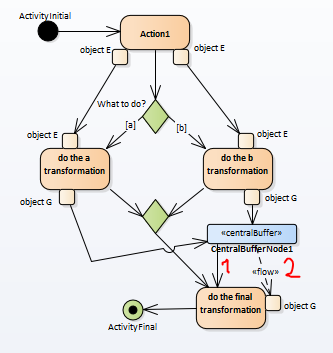 [Update] My tool allows object flows into and out expansion nodes regarding merge nodes, like this updated diagram: 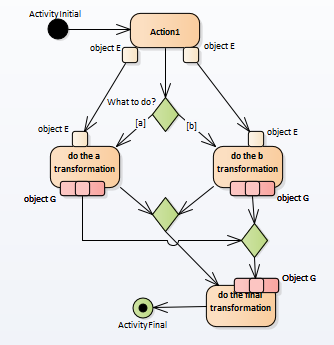 My understanding problem is now located in this chapter

An ExpansionNode is an ObjectNode used to indicate a collection input or output for an ExpansionRegion.

I have only plain actions, no region to iterate this single object.

I don't know whether your tool supports it, but this should be the diagram: 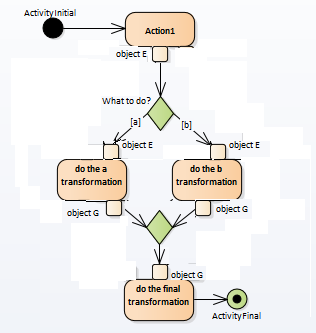