How should the interaction between the MIS instances of a large system happen?

The plan was to build a large system (Management Information System or MIS type) to be used throughout the country, by say 100,000 users daily. The team decided to split that into small MISes (something around 15), each of which with perfectly divided business specifications and roles. Each MIS works fine on its own, however since they are a module of a larger system, they need to be integrated and some data sharing between them should happen.

Following is the illustrations of how the actual system has laid down: 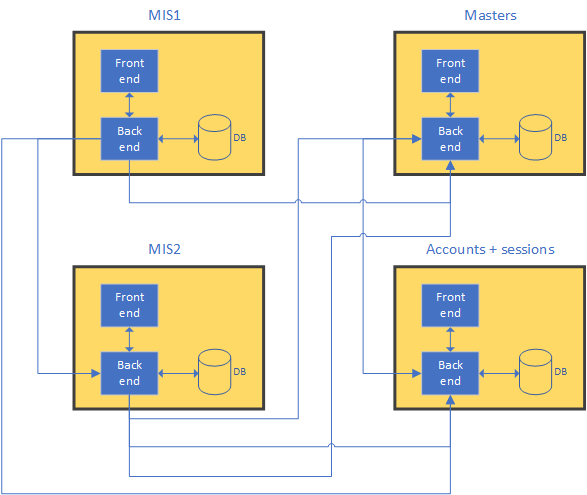 All these modules are connected between each other by local HTTP APIs which cannot be accessed from public.

Each MIS is a Sing Page Application.

We are using RBMS as main database.

Most of masters data are cached in browser local storage for the first time an MIS is loaded, and they will compliment the server data (which only has the slug from the Masters data). But in backend each time the Masters backend is called and we do not have a cache mechanism there.

When we followed this architecture, we faced the following issues:

How do we deal with the problems we are facing?

The following gives some feeling on how the data trasfer might look like (however our use case is different): 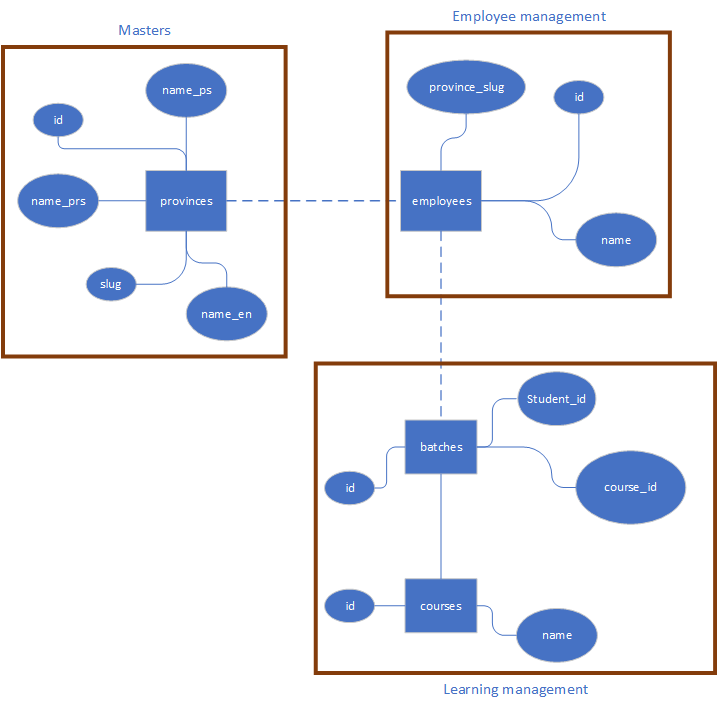 In this scenario, I have a employee management MIS, which takes data from masters and learning MIS. We have integrate the employees database with provinces table of masters database in the following manners:

The above set up will be time consuming when there are many fields to be fetched from other MISes.

Another problem will be the aggregations. If we need to aggregate the data based on a field which is not in the current MIS database, we need to keep a duplicate data of the same data set in this database too, which the synchronization is a problem with.

HTTP seems an overkill for inter-MIS calls to me since HTTP checks so much for fault tolerance, which is time consuming and I do not think we need, since the network has a stable condition, however it might be only my own assumption.

30 sec is a pretty long time for landing pages, for example in learning MIS, the batches list page would be a headache for all the users.

Browse other questions tagged architecture enterprise-architecture distributed-system load-balancing or ask your own question.

14
Entity-Component-System architecture: interaction between systems
0
How should a JEE application store credentials for logging in to an external system?
1
Data generation system modular design
1
Single database, multiple system dependency
1
java add new modules to an existing app
3
How to organize exchanges of non critical messages between servers in multiple data centers by using Kafka (or other solution)?
7
Information sharing in event-based systems
1
How to model interaction between entities in ECS?
0
What should we consider when designing a load balancer with minimum cost