Object Instance Diagram - What can be modeled?

According to my professor, one of the following relationships cannot be modeled in an object instance diagram:

I made the argument that the association could not be modeled in an object instance diagram, since that is more abstracted and is typically for a class diagram, while the other two are more concrete. However my TA told me I was wrong, and did not offer additional clarification.

I have read this post and looked up this page. Any guidance is appreciated.

It might help to remember that classes don't really exist in the real world (they exist in our mental models), but objects do exist. So, when I'm using a UML object diagram, I'm showing things that are instances, usually of real-world things.

For example, if I say a Student is a Person, it's a generalization relationship. That relationship exists mentally, and you can show it in a UML class diagram.

But if I'm talking about a person named Jane Doe born on July 14, 2002, there is only one object, although she may be a Person and a Student. There are not separate objects in the real world if a person is also a student. If the purpose of the diagram is to speak of the object as a Student, then you would show that in the diagram. But it makes no sense to show a relationship to Person, since it's not an object (but a class): 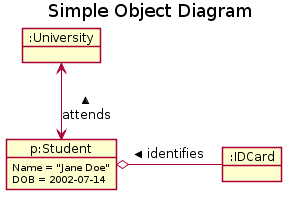 Not the answer you're looking for? Browse other questions tagged object-oriented-design uml diagrams or ask your own question.