Here's a block diagram of my setup: 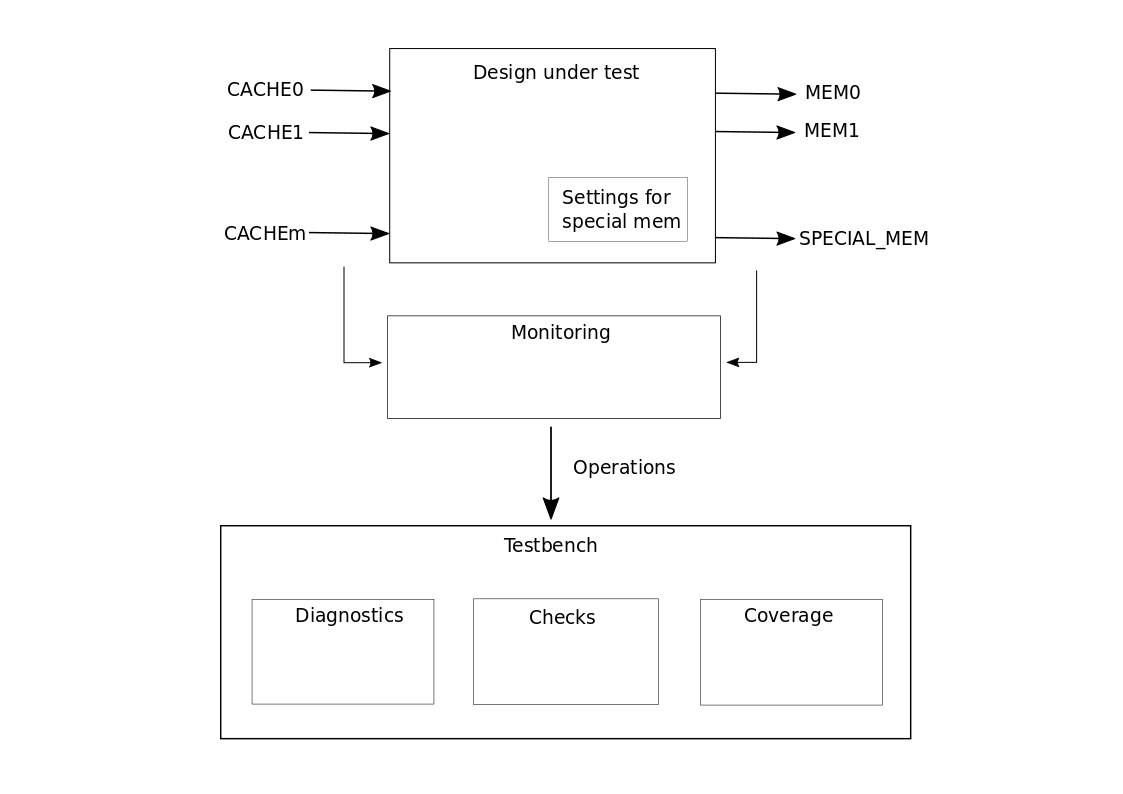 The design under test (DUT) is the digital circuit I am testing.

The monitoring block looks at the input and output signals of the DUT and figures out what kind of access is going on (e.g. from CACHE0 to MEM1). It creates one object for the current operation and sends it to the testbench.

The testbench performs different tasks on the objects it receives:

I need to be able to model all types of accesses that can happen. If I think in term of properties that an access has, these are the cache_kind and the memory_kind. When the memory_kind is SPECIAL_MEM, though, there is also the special_mem_mode property. In my real life project there are actually many more properties I need to handle, but I want to keep the example brief and (hopefully) understandable.

Another thing to keep in mind is that in my professional field there is an over-reliance on data objects, as opposed to using objects with polymorphic behavior. You observe the inputs of the digital circuit, waiting for changes that signal a new access, create an object that describes that access and send it to different parts of your program to do different things based on it.

I'm working in an object oriented programming language called SystemVerilog, which borrows a bit from C++ and Java. I'm not sure what the best way is to model my accesses.

I could create a base interface for an access that contains the properties that are common to all accesses:

I could then create a specialized interface for the access to the special memory:

There is a programming language in my field called e, where it's possible to do something called when subtyping. I used to program in this language, but had to switch to SystemVerilog. In e we would model the accesses like this:

This mechanism of when inheritance, which relies on properties, is what probably kicked off the over-reliance on data objects. After migrating to SystemVerilog, the habits stayed the same.

Coming back to the traditional OOP world, would it be better to do away with the get_mem_kind() function entirely and encode this in the type itself? Concretely, we would have one interface for each mem_kind:

This way we do away with the awkwardness of having a function in special_mem_access that trivially returns SPECIAL_MEM. At the same time, getting the mem_kind by querying the type of the object is most probably a code smell. We also open up the possibility for a class to implement access directly, instead of one of its sub-types, leading to a new inconsistency.

I can also imagine moving the get_mem_kind() function to an interface parallel to special_mem_access:

Finally, one could simply put all methods inside a single interface and document that the get_mode() function is only meant to be used for objects whose mem_kind is SPECIAL_MEM:

If the value of get_mode() is not defined, the object could issue a fatal error if the function is called.

I've tried to find resource online that deal with this topic, but I haven't had much luck. I'm curious how to best model this heterogeneity in properties an object has in an OOP language. Moreover, there may be many different dimensions that cause such heterogeneity: for example, there could be another MORE_SPECIAL_MEM that has other ways it can be accessed, there could be different access modes for SPECIAL_CACHE, etc.

Interfaces should be used as an API to different users of the class.
You should strive to create an interface that provides a uniform API for the users of objects implementing such interface.
The user should interact with an object implementing interface "A" without caring about the actual runtime type of the object (ideally) or how exactly it implements it.

In how you presented your question, you try to create interface for objects with the sole intention of receiving their data members.
Getting object's data members stands in stark contrast to what I described above - as you are making an assumption regarding the data members of objects implementing the interface.
As you request data members and fields of an object, and not so much care about executing some functionalities on them in a uniform matter - you ask for a specialized API and (essentially) you ask for the specific object type itself (in how you described it).

You should rethink your design. What exactly you try to achieve here, when you create interface to this objects ? (as this is not the use-case of interfaces in OOP)
If you are trying to reuse specific members/implementation details between objects, you can use aggregation/private inheritance and expose what you need.
If you can use the specific object type in your instances of usage, your problem is solved.
The other solutions as you mentioned here ("when" functionality) are to write fat interfaces that divulge a lot of specialized information from the object, or to execute functionality based on RTTI / your implementation to it. Using such things can indicate a bad design (as I noted for you here).

Not the answer you're looking for? Browse other questions tagged interfaces or ask your own question.

14
How to implement only a part of an interface
9
Implicit vs explicit interfaces
10
Interface and Inheritance: Best of both worlds?
4
Is this Hybrid of Interface / Composition kosher?
3
Interfaces, abstraction, coding to an interface
9
How do I structure interfaces when objects only use part of the interface?
3
Whether to replace mutually exclusive but poorly related properties with an interface
0
Avoiding vtable pointers in objects in C++