I would like help interpreting this flowchart. I don't know what k means even though they say what it represents in the question.

I can quickly see that since dimension m corresponds to variable X that the first loop has to be iterating on X. Therefore A has to be X(k) → Z(k).

Where I get stuck is choosing (m+k) or (n+k). What exactly does k represent?
The question says that variable k varies from 1 to m by 1.

m is the number of elements in the array (the dimension).
k is the iterator?
variable k varies from 1 to m by 1means that k varies from 1 element to m elements right?
I know the answer is (m+k) but why isn't it (n+k)?

If possible could you please explain it in both C & Java using the same variable names? Thank you. 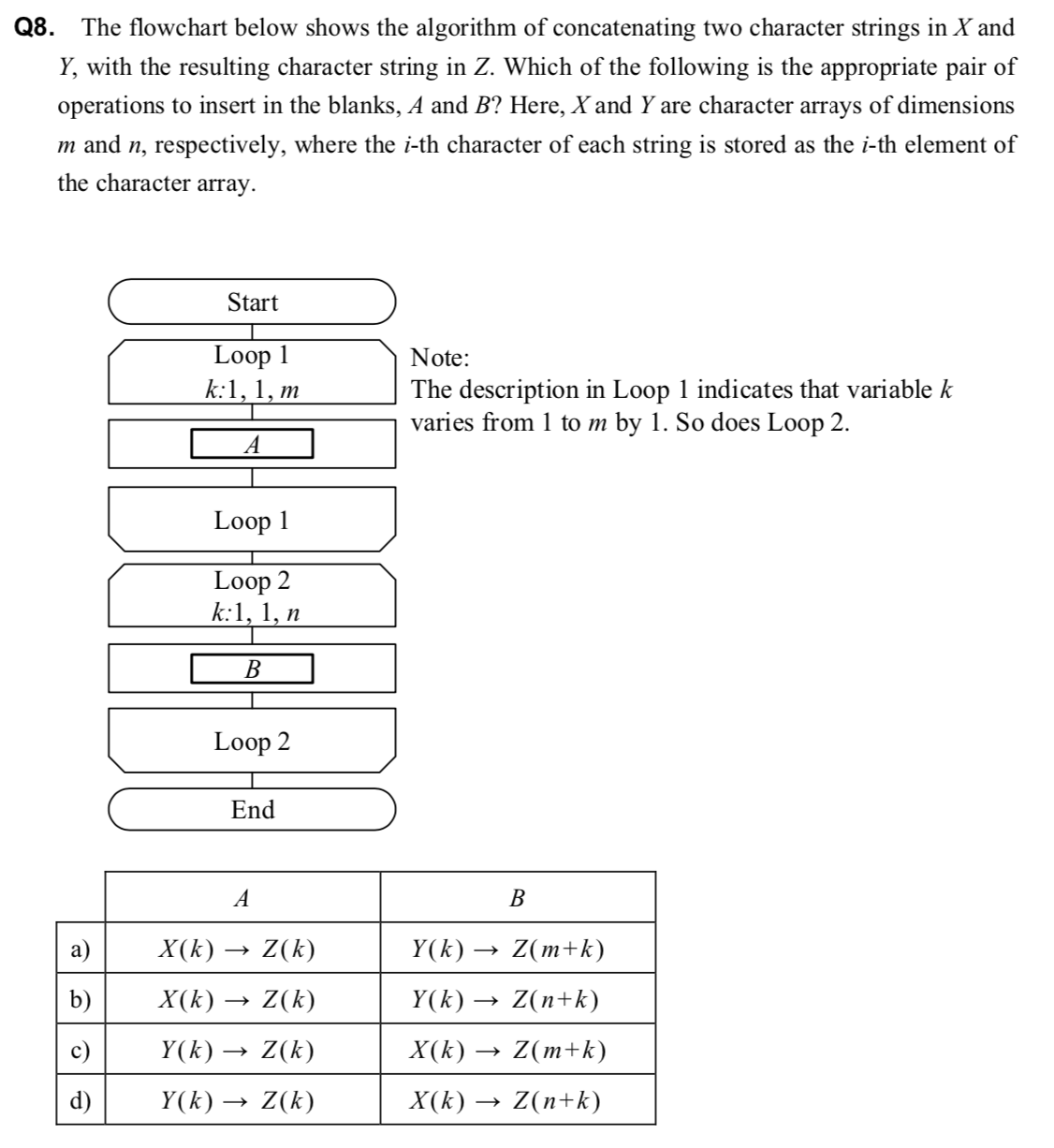 Let's decouple, a bit, the iteration ranges (e.g. for loop control variable k) and what they are iterating over.

Technically, the loop control variable(s) iterate over a range of integers, e.g. 1..m or 1..n (rather than over elements of the arrays).

What exactly does k represent?

m is the number of elements in the array (the dimension)

Specifically, in the array X — whereas n is the number in Y.

You already realize that the concatenation operation is concatenating X with Y not vice versa.  Loop 1 then merely copies X into (the first part of) Z, character by character, and thus at each k, a copy from X into the same position in Z.

Next, Loop 2 copies Y into Z — but where to place the elements in Z, given that X has already been copied into Z?

In words, the answer is that the copy of (concatenation of) Y should go after the copy of X in Z.

In variables, that translates such that the first element of Y should go to the Z position at m because m is (firstly) the length of X, and also (secondly), it is where Loop 1 left off/stopped in Z — in other words, just after loop 1 finishes, m identifies the boundary between the last position used and the first free position in Z.  Since we want to copy the whole of Y into Z, then all the characters of Y come from k but go to m + k in Z.

(If you work through a real example, e.g. concatenate "hi " with "world", you'll see how this comes together.)

10
Documenting a REST interface with a flowchart
2
Designing Algorithm Flowchart Application
5
What types of processes have to be reflected in flowchart?
1
Flowchart with subroutine
0
Flowchart: get values from functions. Rectangle or Paralellogram
4
Parallel process flowchart shape in Draw.io