I am having a lot of trouble understanding the logic behind the infamous "Find total ways to achieve given sum with n throws of dice having k faces" question. After extensively searching for explanations, I have come up blank.

My confusion stems from the fact that it does not seem to follow the same logic as the "number of ways to make change with coins" problem, which is explained excellently in a number of videos, particularly this one.

My understanding of the coin change problem

This is, I believe, quite sound. Essentially, when we get past the first row, we look at the number of ways to make the target from both the first coin and the second coin, not just the second coin (in general, it is the current coin plus all previous coins). As explained at the linked video, we need to follow some rules to do this:

For step a, we can determine this by simply copying the value from the cell above: this is, after all, the number of ways we can make the same target without the current coin. So for 3, we copy the 0. This is correct; using a 2 coin, there are 0 ways of making the target of 3.

For step b, we need to subtract the current coin from the target, which will give us the remainder. Then, we need to determine how many ways there are of making this remainder from the current coin. So for change of value 3, we have (3-3) which is 0. For a target of zero, there is 1 way of making 0 with a 3-coin, as the table shows (highlighted). Thus we have 0 + 1 = 1.

I can see how to populate the whole table therefore. The algorithm used is not important here.

My failure to understand the dice problem logic

The following algorithm is from the link above:

I have read this code over and over, perhaps too many times, but I just don't get it.

Inputs: number of dice (d) = 3, number of faces on each die (f) = 3, target value (s) = 3. I have added some debugging output and generated the following to show how the cells in my table are calculated:

So, having broken down the algorithm into plain English, what this shows is that

At this point, it does not appear to follow the logic of the coin change problem; that is, the psuedo code block I posted above. I even tried giving the die numeric values to try and apply this logic; i.e. die 1 is [ 1 ] and die 2 is [ 2,1 ] to follow a similar idea to "adding additional coins" but it just does not work. This is worrying for me because whereas I understand the (beautiful) concept behind dynamic programming, I cannot appear to apply the same logic to all similar problems of this nature.

Can someone please explain my three confusion points as indicated:

a) How this works and the logic behind it.

b) What on earth is this line doing?

c) Why is cell [2,1] never calculated? I am now pretty certain that this is simply because we cannot ever make 1 from 2 dice, but would like confirmation on this please in case I have missed something.

Both algorithms are usually expressed using recursion, yet the actual implementation is then often done using iterative techniques. This sometimes leads to confusion, as the algorithm you present pre-fills a table with the desired values iteratively and then just returns the value in the one cell we are looking for.

Let's try to write up the recursive algorithm in detail: we want to find the number N(D,S) of ways to express a sum S using D dice with F faces each, all faces numbered from 1...F. Each die must be used, so we can immediately say that N(D,S) = 0 for all D > S, i.e. the left lower half of the N(D,S) table will be all zeroes. Also, N(D,S) = 1 for all D = S because there is only one way of rolling D with D dice (when all dice roll 1) so the diagonal will be 1.

All recursion begins with a base. There is one way of rolling any number between 1 and F with 1 die, and no way for all other numbers:

so you basically add up F numbers in the horizontal strip to the top left of (D,S). So for any line D you can derive the numbers from the line above. Repeat that until you arrive at the first line and that already completes the recursion.

The algorithm you present computes this not recursively, but iteratively, and makes heavy use of precomputed data. You notice that at no point does it actually sum up the F values from the row above, there is no loop like

It can skip this because the value in the cell to the left already has something that is almost this. In particular

Additionally, if you set

you can move the base of the recursion one row up and avoid having to treat D=1 as a special case.

Update: To understand why the recursion works, let's look at the example you mention. How many ways are there to roll 4 with 2 normal 6-faced dice? Well, in this simple case, we can write down all possible rolls in a table like this:

with the values on the dice in the top row and leftmost column, and the sum in the other cells. We can immediately see that we have exactly three combinations of rolls that add up to 4, namely (1,3), (2,2) and (3,1). Trivial, so far.

This is true for the general case, too. As long as each number j shows up on the Dth die only once, there is only one way to throw it, then there is a 1:1 mapping of each solution that has this number on the last die and the sum S to a solution for the smaller problem with D-1 dice and a sum of S-j. Hence, the number of such solutions must be identical. Add this for all possible values of j and you arrive at the recursion step.

The dynamic programming technique, using the algorithm in the original question, to solve "How many ways are there to roll 4 with 2 normal 6-faced dice" generates the table shown in the image below, which has been annotated to aid in understanding. This shows how the previous row's values are used in calculating the current row's:

With this simple walkthrough for 2 dice, the same logic of using the previous row's values can be hence applied to other problems with any number of dice/any target sum.

The caveat to the above walkthrough is shown in the below image, which is where we are trying to generate 8 with 2 dice, each dice having three faces; the table for this is shown above, but repeated here for clarity. 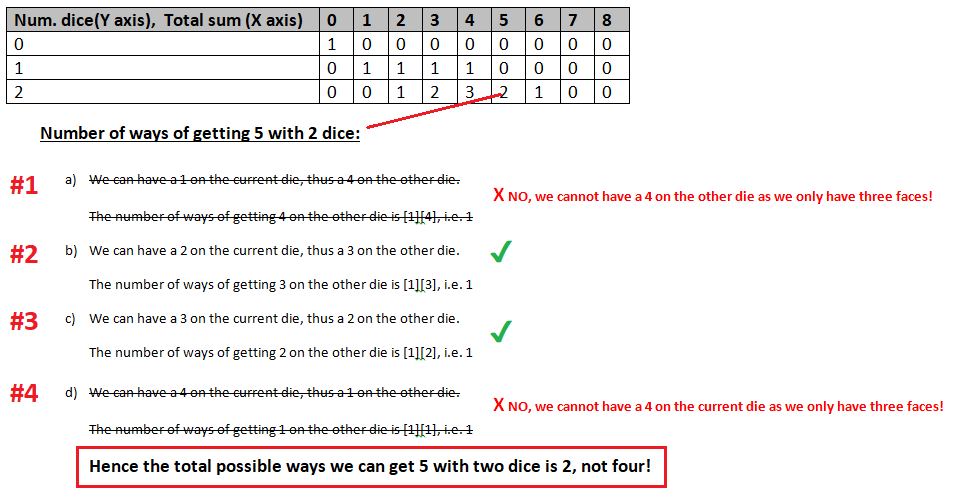 In this case, summing values from the previous row in the manner described in update 2 is clearly not correct, because it would mean using values on the dice that are not present due to the limitation in the number of faces. This is where we need to be smart about what values we use, which is dealt with in the if case in the posted algorithm, labelled as CONFUSION POINT B.

3
Is the Leptonica implementation of 'Modified Median Cut' not using the median at all?
45
Unit-testing of inherently random/non-deterministic algorithms
3
Logic required to solve a problem relating to location of objects
1
What is wrong with my logic for the divide and conquer algorithm for Closest pair problem?
1
How to implement backtracking to check if all fields have been traversed
2
Object Oriented Re-Design/Re-Write
0
Version checking when reading deeply nested structures