Given two modules, what consideration should be made when writing cross cutting codes

I am recently having a discussion with colleagues about where should a piece of code reside within our django project.

For the sake of the question, let's say we are creating APIs for uber-like quotation feature

We have the following modules(an app in django's lingo), each concerns with persistence, business logic and API

Now we want to have an API for quotation to also take promotion into account.

It comes natural to me to put the API under quotation module, extending existing API behaviour, and adding promotion as a dependency.

However my colleague advocates otherwise - to create a new API under promotion and adding quotation as a dependency.

While the above example is for illustration only, I would like to hear what, in general, considerations should be made when placing cross cutting code?

Two services can be pretty well designed at one point in time, with isolated use cases, and next year someone comes up with a new requirement which requires cross-domain access - that is how reality works. Throwing the old system away and build a new one with just one service instead of two is not even impractical, it seldom results in a better system.

I want to propose an entirely different approach, instead of creating cross-module dependencies.

As I understand, Quotations are calculated based on one or more factors such as location, traffic, and promotions. More elements may be added in the future, and a permutation/combination of these factors may be used in different situations.

The standard way (considering you have a monolithic Django project with multiple apps) would be to make calls from one app into another. Depending on who calls who, each app would understand the format and structure of the other app and know how to call a method with params and collect responses. The calls will also be serial, where the individual pieces are collected one by one and collapsed into one quotation.

Instead of doing this, you could use a reactive/message-driven architecture. You can bubble an event or send targeted messages to different applications. Each app will have subscribers waiting for these messages. They will pick up signals/events, process them, and put a response message back into the queue.

The quotation subscriber will wake up each time a response message comes through to see if it has the necessary info to collate; otherwise, its a no-op. On arrival of the last message, the Quotation application collates the response and responds to the callee. 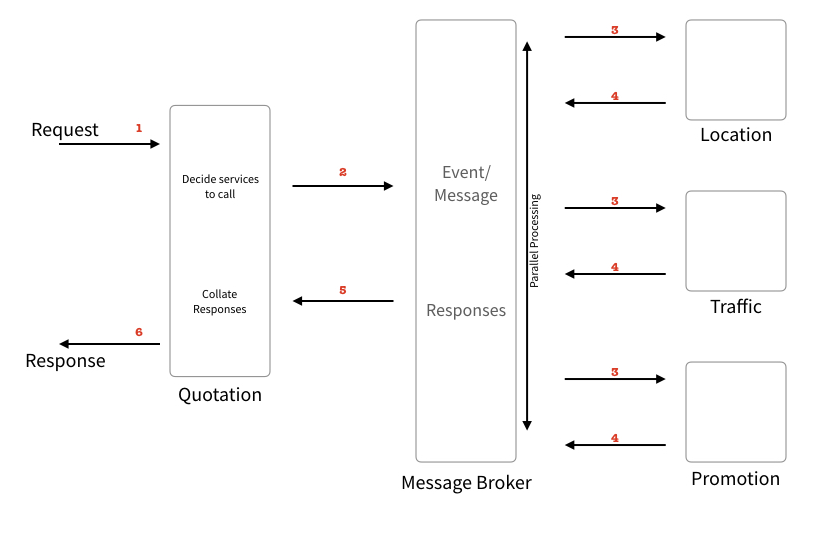 Things you need to be aware of:

Not the answer you're looking for? Browse other questions tagged design architecture project-structure or ask your own question.

14
What should you do when presented with a horrible design?
11
Architecting a modular service application
5
When writing a library, how much should the end user do?
3
What norms/standards should I follow when writing a functional spec?
36
When writing object-oriented code, should I always be following a design pattern?
2
When writing a library or an API, when should and when shouldn't I validate or automatically correct errors in data provided by another developer?
2
What should be primary guideline when defining a bounded context?
0
What should we consider when designing a load balancer with minimum cost