I have a problem figuring out the relations between some of my database tables. The scenario for this buisiness case is a b2b buissnes.

Now im getting stuck on the next step.

I've build some roles and permissions into the system.

I dont think that would be the best solution but i cant figure out a better solution.

How can i make it that a user can be a distributor or company without setting the relation to 0. 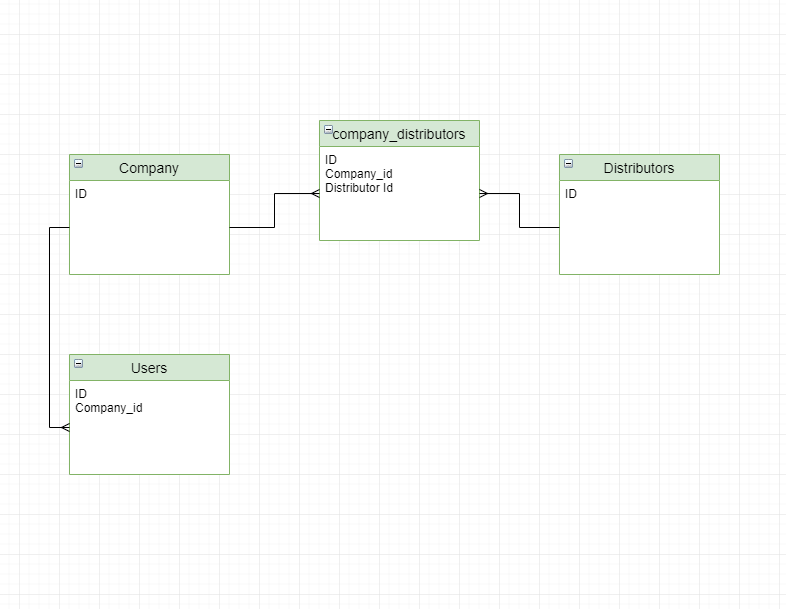 Alternatives for the user relationship

What are the theoretical alternatives:

Choice of the alternative

What model seems the most accurate to you ? What would be the other differences between a company user and a distributor user that could justify the specialization ?

I do not have all the cards in hand, but intuitively I’d go for 1, which would be implemented exactly as you’ve described.

The approach 2 would be implemented either (also) as you’ve described (using the single inheritance table pattern) or with 2 tables (assuming User is abstract and using concrete table inheritance pattern, but the two tables might look very similar), or with 3 tables (using the class table inheritance) and a couple of additional relations requiring a lot of sql JOINs.

Now, looking at these other alternatives, unless company and distributor users would be very different, the additional tables seem to me as an overkill and I’d still stick to your initial approach, which seems to me a very good choice.

Other alternatives on the company/distributor side ?

One additional question worthwhile to investigate, however: are you sure that distributor and company are not two specialization of an abstract LegalEntity ?

In this case you could consider simplifying things on the user side by making only one relation between user and LegalEntity to which he/she belongs. You would then manage the legal entity the distributor and the company as tables of a class inheritance table scheme that implements the inheritance scheme between the classes.

May be this last alternative is an overkill, but depending on the similarities between distributor and company, you could the additional complexity could be compensate by more consistency and less redundancy in the code.

Not the answer you're looking for? Browse other questions tagged database database-design or ask your own question.

0
How to improve database schema with different n:m and 1:n associations between users/tasks/comments/attachments
3
Patterns for undo in multi-user applications on relational data
21
How would you design a user database with custom fields
2
Use of tenant_id in multi-tenant database
4
Database design: manage permissions on multiple applications resources
2
What's the best way to handle a “union” in a relational database?
1
Database relation design