Just wanted to know if cyclic dependency is something that one should avoid in microservice design.

For example, let's say we have a simple web store that sells fruit.

Let's say that we want to forbid our users buying more than 10 bananas total. And put the info about banana availability on the screen.

So which is the better way to do it:

Let's first get rid of a misconception

The microservice architecture "structures the application as a set of loosely coupled, collaborating services":

The goal of this architecture is allow you to compose many simpler microservices in order to offer complex services that can be scaled. Achieving this goal does not mean that microservices are independent, but that they are that are independently deployable. And that's a big difference

Your question in theory

If a microservice A depends on a microservice B you must be able to deploy a new version of A without touching B. So the services are dependent but they can be independently deployed. As a real-life example, look at the relation between authorisation and product microservices in the Netflix stack.

If there is a cycle however, one should analyse if the service decomposition did went to far:

Note that the dependency can very well be indirect (e.g. via a message queue)

Your question in practice

Let's look at the rule: "forbid our users buying more than 10 bananas total":

But you could imagine less trivial scenarios:

Yes. Microservices are (by definition) independently deployable and scalable chunks of code. When you have a cyclic dependency, you can’t deploy one part of the cycle without the other. You lose the main benefit of microservices, and would be better off shipping the cyclic bits together as a larger service.

If you keep that in mind, you can develop microservices that are independent single functions, and not slide into dependency hell. Just observe two simple rules:

What you are describing here is called a "distributed monolith". The defining characteristic of microservices that distinguishes them from web services in general is independence, or in SOA terms: autonomy.

Distributed monoliths are bad. Worse than straight monoliths. I think you have two choices here. Accept that the ordering and stock services are coupled and design and deploy them as a single unit or you go through the effort of designing these so that they do not interact directly.

The first option is perfectly acceptable, in my mind. I think one of the things that has gone off the rails with microservices is that there's an idea of absolutism where each endpoint must be its own application with its own DB. You can still get the benefits of microservices by dividing things based on their natural dependencies. Maybe 'ordering' and 'stock' are too hard to decouple but you can keep 'account' as a separate microservice. Microservices are not always the right choice. They have costs and benefits like anything else.

If you want to make this a microservice, you will need to think about how an agent or client can orchestrate calls against them and pass the necessary information from one to another. For example, you might build a reservation call in the 'stock' service. If the customer has successfully reserved the bananas and successfully ordered the bananas, you then confirm the reservation. This is going to add a lot of complexity. You need to figure out if it's worth the trouble.

I found this Munroe-esque cartoon that I think fits the situation: 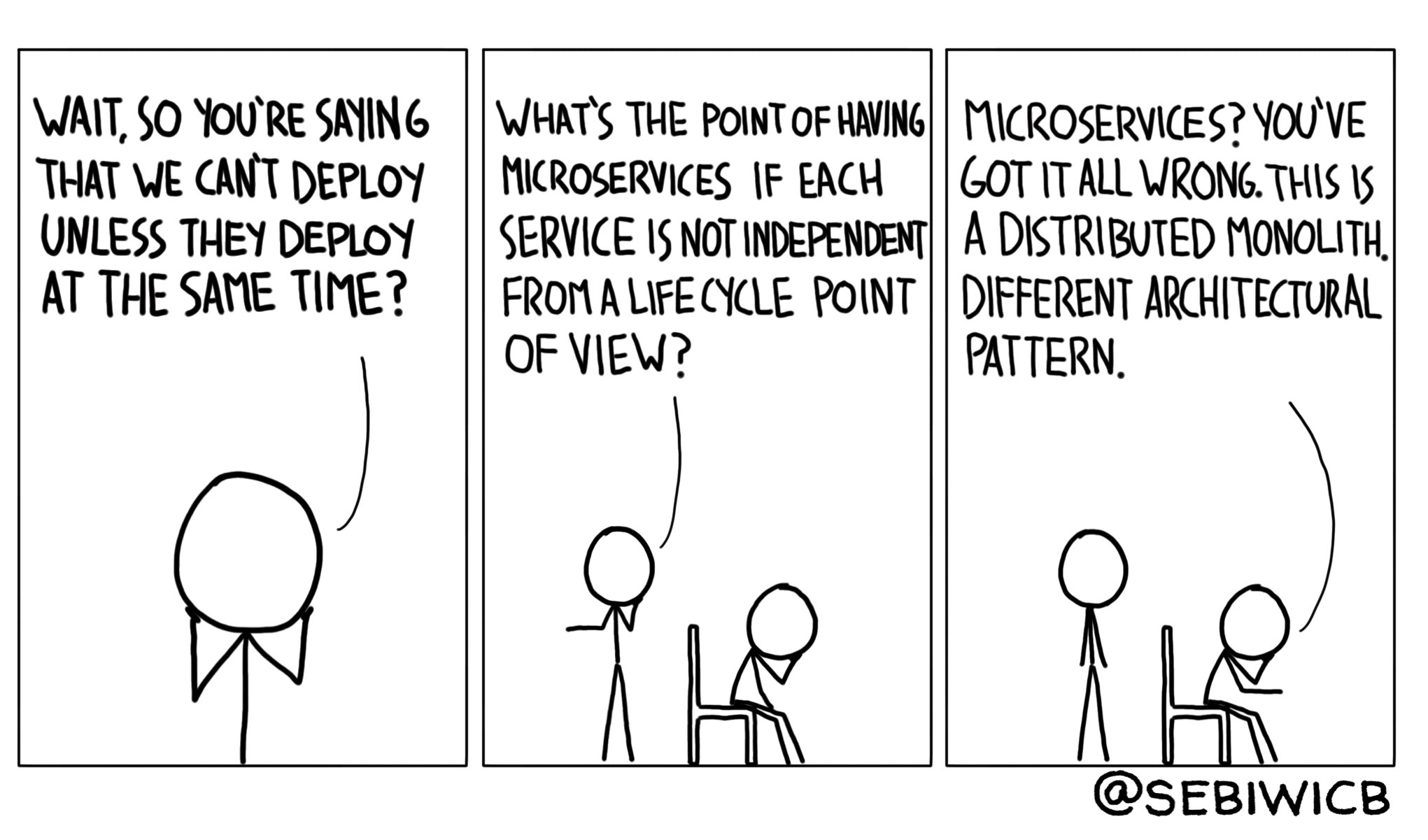 The answers above are right but I wanted to add a bit more about how to get around this issue.

All the answers above discuss how cyclic dependencies between microservices are bad and lead to a "distributed monolith" architecture which essentially has the worst of both worlds (at least for deployment and complexity, though I guess it remains horizontally more scalable).

@Christophe's accepted solution alludes to however the fact that in more complex applications you can't really avoid cyclic usage so readily.

I faced a similar situation in my application. I had a service that (sort of) managed deals and another service that managed transactions.

when calling GET deals, it populated transaction information by calling the transactions service

However, I got a new product requirement that when creating a transaction, I also wanted to make sure it got attached to a deal.

I could have added logic in the transactions service to call the deals service to make sure the txn gets attached automatically but this would lead to a cyclic dependency.

The way around this I found was that I could use event emitters. When a transaction is created, I could emit an event that a transaction was created. Then in the deals server I could make a subscriber that watches for this event and creates a deal and links that transaction ID.

Through this pattern, the transactions microservice will never have to depend on the deals service.

A circular dependency means the design is incorrect. (Unless you are trying to model a real-world paradox). The solution is to adjust the design: { Tables, Services, Processes }.

Don't go overboard with Microservice dependencies. Every architecture has its exceptions.

see https://colossal.gitbook.io/microprocess/differences/compared-to-microservices (I am a contributor to this draft standard)

Not the answer you're looking for? Browse other questions tagged architecture microservices architectural-patterns dependency-analysis or ask your own question.