Is this a good enough example of Factory method pattern?

On Wiki page for Factory method pattern, there is following example:

Here we are switching on the PersonType to determine which object to instantiate. I know that it makes sense to use Factory method pattern to decouple the creation of an object out of multiple objects of same type but the above code does not satisy the open-closed principle. Whenever there is new type of IPerson we will have to make changes to the implementation of the Factory and if we consider future, overtime this factory method can grow pretty big.

Another pretty common example for Factory pattern is instantiation of database where you can choose among different database servers. In this case we can have a config file and specify which database to instantiate and we are kind of creating only one object out of multiple choices. In the above case for IPerson we are instantiating multiple object of multiple choices. Is Factory pattern a correct choice or am I thinking too much?

the above code does not satisy the open-closed principle. Whenever there is new type of IPerson we will have to make changes to the implementation of the Factory and if we consider future, overtime this factory method can grow pretty big.

If you were strictly following the open-closed principle, you would not actually modify the factory. You'd extend it.

For example, if you added a new PersonType named Homeless, you could do this:

That being said, I would probably modify the factory in place, as following the OCP in this case would lead to more complexity than is really necessary.

Yes, this is an appropriate example for the factory method:

Indeed, your concrete parametized implementation creates a coupling between the factory and the all the specialisations.

A more flexible approach in the sense of the open/close principle would be to let all the specialisations register dynamically (example) to the factory. The enum argument would then be replaced by a dynamic ID (for example returned at the registration) or a string. However, even if there would no longer be an undesired coupling in the code, there would still be a hidden dependency between the factory consumer and the classes it want to instantiate (since it has to know the possible arguments it could use).

Your concern of static factory method violating open close principle is really not a concern when the pattern is employed in the main side of the code. If it is used in application side then it could be an issue.

It would be a good design for an application (be it web, desktop, embedded, and so on) to segregate the code in to application (business) code and main (bootstrapping) code.

The static factory patterns are generally used in the main side code where the complexity is low and the cost of modification is also low.

The below class diagram could help in visualization. The interactions between the classes in the main side is NOT shown. In the diagram below bootstrappingMain and dependencyProject is considered as main side code 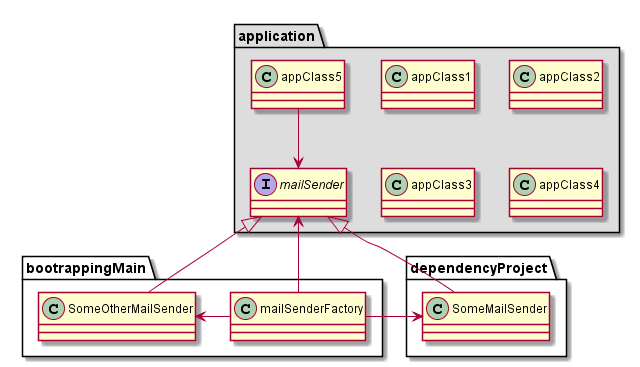 Not the answer you're looking for? Browse other questions tagged design-patterns coupling factory-method or ask your own question.