How to guess which pieces of text belong to which lines in a scanned document?

I want to be able to analyze a five-years archive of supermarket receipts. The receipts are scanned, and thanks to Google Cloud Vision API, the result of an OCR is available. Google's API, however, gives only the text and its geometrical position on an image, nothing more. Example:

My next step is to try to build a series of lines containing the pieces of text. In other words, the fact that Google's API found that the piece 5621 is after 5620 doesn't mean that it actually is, since receipts are sometimes partially rotated, curved, crumpled and mangled. Here's an example: 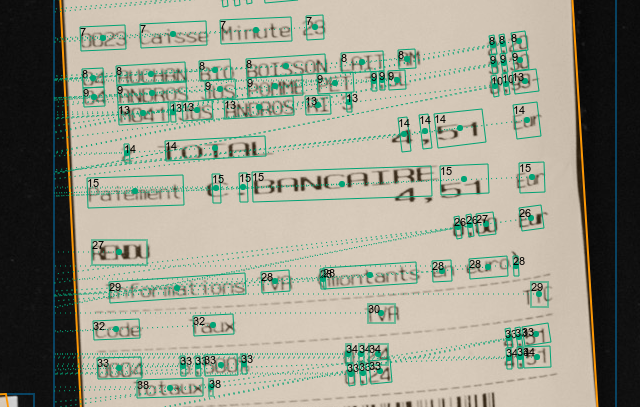 Towards the top, there is a list of three items, with their prices on the right. It's easy for a human to understand that the second price, 3.30€, corresponds to the second item, and not the first one; however, its y coordinate could make a program guess that it actually belongs with the text of the first item, not the second one.

In order to fix that, I decided to proceed like this:

Those lines are indicated in black on the image. It seems to work in most cases, but not all. For instance, the line 7, 8 and 9 are correct, however the line 10 is a fail, since the projection doesn't reach the name of the product on the left (which is then considered as line 13).

Even more obvious is the “TTC” at the bottom right, line 29. Google's API failed to detect that the text is rotated, and so it's detected as belonging to “Informations” at the left, instead of “TVA” on line 30. Similarly, lines 33 and 34 are tangled, so the lines for the text on the right is completely wrong.

While I could adjust the algorithm to work well for this particular illustration (and fix the obvious bugs, like the third price at the top being split: the first two digits are on line 10, but the last one, abnormally, is marked as being on line 13), it seems tedious and it will stop working for other cases. I don't believe small adjustments like that is the correct way to solve the problem.

Is there a standard way of solving those types of problems? I suppose that artificial intelligence could be a possible alternative here, but I'm unsure what should be the inputs for the AI to be trained. Anything else could be done?

The ideas of the two commenters is by and large your best bet, because it relies on some kind of normalization, which is the typical way such problems are treated. Because of the "heuristic" nature of the problem you are solving (OCR), noise (of all sorts) can always bring you trouble, so the least you can do is ensure that your input is as close to the "canonical" input as possible.

Not the answer you're looking for? Browse other questions tagged algorithms artificial-intelligence image-processing or ask your own question.

11
How to document an algorithm properly with sample data?
16
How does a garbage collector prevent the whole memory from being scanned on every collect?
2
Is it possible to antialias existing lines, circles, text, etc. of a single color?
25
3d Packing algorithm for item's shipping
0
Counting lines of text and get color of a specific line in an image
6
How to "de-dupe" similar lines (detected using the Hough Transform as rho/theta pairs)
1
Which class of algorithms does this problem belong to?
1
When implementing new features that are similar to other features, do you make the older features more generic?