How to avoid circular references with EF Core and Global Query Filters?

We're working on building a multitenant application, and we're using Entity Framework Core as our base data provider. With EF Core, you can use Global Query Filters to define custom filters that apply to all queries generated by EF.

These filters work great and appear to serve most of our purposes, but we begin running into issues when we attempt to add our multitenancy filters to the application. To better separate our concerns, we've created various classes to serve as our tenant identifiers and handles. However, this begins to cause problems when we attempt to use our tenant identification/security classes as the whole project breaks down as these security classes have a dependency on the data context itself.

A simplified model of our application would look something like the following.

In our application project, you'd find:

And in our persistence project, you'd see something like:

As you may note, the above code actually fails to run due to the circular dependency, but I cannot seem to find any better ways to structure the application aside from having 2 separate dbContexts (which seems a bit hacky).

What would be a better approach to handling these query filters without needing to tightly couple my security to the dbContext?

The question doesn't mention it, but you actually have two circular issues here: circular project references (which I surmise is the issue you're asking about) and circular dependency graphs (which I suspect you may not have noticed yet).

From the question, I assume your project structure is as follows:

In essence, you want to structure your project dependencies like so: 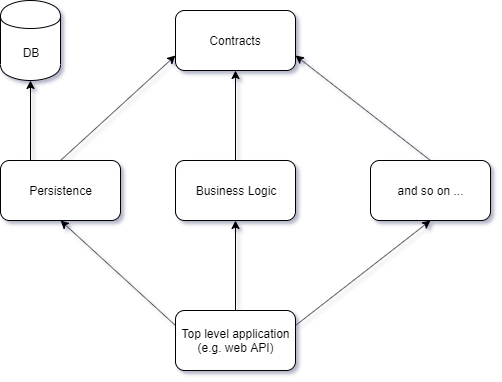 Correction The top-level project should also reference the contracts. I already deleted the image I created so I couldn't fix it.

Since the middle projects do not reference each other directly, you logically can never run into circular references between these projects, which is what you want.

Note that this is just a basic example. In the architecture I most commonly use, there are multiple contract libraries, specifically to avoid bloating the contracts library in very large applications where there are heaps of interfaces. But the overall point remains the same: separate your contracts.

Using this setup also helps you keep things clean by ensuring that your public interfaces don't expose any layer-specific types. For example, if the interface is housed in the persistence project, your interface can have a method that returns (or takes in) a persistence type (e.g. MyDbContext), which you shouldn't do for obvious reasons.

By having the contracts in their own project that depends on nothing (because depending on any other project would create a circular reference), your interfaces are forced to only use either commonly known types from the language/framework, or DTOs you've explicitly created in the contracts library.

This is always a matter of conflating two concepts, in this case IDbContext. The circular graph you end up with is:

Note: just to be clear: infinite recursion exceptions can be avoided if at least one of these dependencies is registered as a singleton or scoped dependency. But the point remains that the dependency graph itself is circular. If your setup works and you're not worried about making this distinction, you can skip the rest of the answer.

Does IDbContext (1) require a security layer? Yes, because you want the rest of your application to have to pass through this security layer (in this case for implementing multi-tenancy safeguards).

You have two different roles for your db context, and representing them as a single concept is causing you to run into unwanted circular dependencies.

I disagree. It's IMHO more "hacky" to foist two separate-but-similar roles on a single class than it is to create separate classes for the separate roles.

It's not so much a matter of having to make two completely unrelated db contexts, but rather making two variations built on the same context.
Given your situation, I'm inclined to call these ITenantContext/TenantContext (i.e. with the security filter) and IDbContext/ApplicationDbContext (non tenant-specific).

ITenantContext derives from IDbContext and acts as a marker interface to separate the two interfaces so your DI container can distinguish between them.

Note: OnModelCreating is a difficult one because it happens during the construction of the context. In general scenarios, it would be possible to use composition-over-inheritance here (where TenantContext doesn't derive from ApplicationDbContext); but this is much more complicated given that we're trying to override the OnModelCreating behavior.
If there is a way to set the filter on the ApplicationDbContext after it has been created, then you should favor composition over inheritance here. But I currently can't think of a way to do this.

ApplicationDbContext is essentially an unfiltered tenantcontext. This means that it loses the ITenantService dependency and the custom OnModelCreating.

This cleans up the unnecessary recursion in your dependency graph:

Note: If you really want to prevent anyone except the persistence layer from accessing the untenanted context, that is possible if you use composition over inheritance. In that case, you can simple keep the untenanted context as an internal class. But that sadly isn't possible in the current example as a base class must have the same (minimum) accessor as its derived classes, you can't make the base class internal if the derived class isn't.
You can still refuse to register IDbContext in the DI container so it can't be used as a dependency, but it will lead to exceptions if your consuming classes try to depend on IDbContext (which they aren't allowed to). That's not as good as having a compile time error when ApplicationDbContext is internal.

Not the answer you're looking for? Browse other questions tagged c# design-patterns architecture entity-framework or ask your own question.

0
Several interdependent models, each with several data sources — how to avoid hell and nightmare
13
How to get around the Circular Reference issue with JSON and Entity
2
How can I decouple query and context in a “query object” scenario?
2
How to avoid tying these two methods together with global mutable state?
5
How to avoid circular patterns in Node?
2
How would one avoid circular object references when each element in a collection can possibly interact with any other element?
0
How to avoid global variables?
0
How to avoid Global State with a world map?
30
Designing a Class to take whole classes as parameters rather than individual properties