I came up with an model to reduce DoS and DDoS attacks and would like your input on its effectiveness... 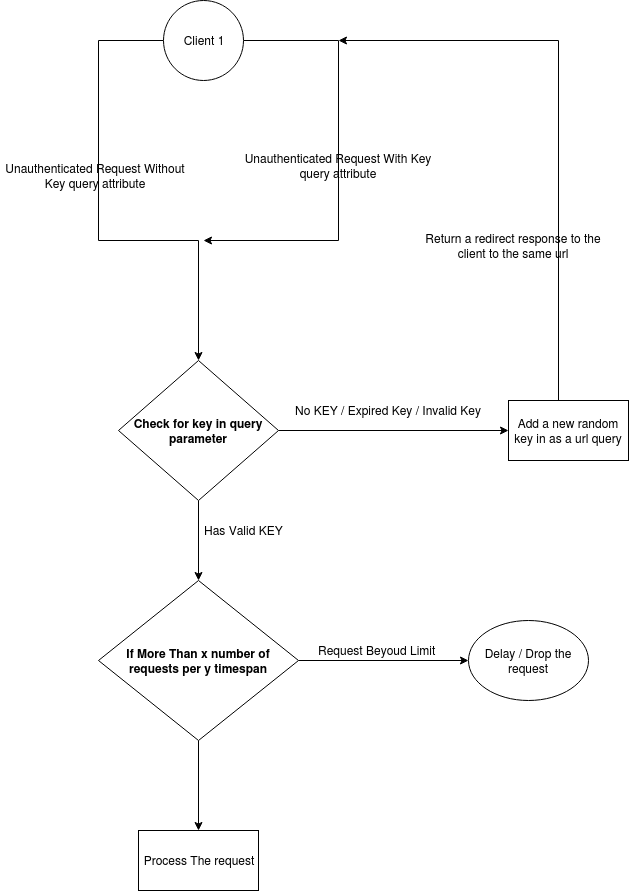 Basically, once a request reaches our servers without having a valid key, we add a key as a query parameter of the url, then return a redirect response to the client with the same url but with a valid key.

Then we can use this key to throttle the requests instead of using an IP Address.

I understand that the attacker might still make millions of new requests to the server, but redirecting the client should be fairly lighter than say downloading a video or large file.

The problem with DOS or DDOS is that they are legitimate requests. Your flow may help but it will not solve the problem. Imagine 4 million requests doing step one all at the exact same time. DDOS.

There is no way to "prevent" a DDOS attack because it is a valid request. You're best bet is to simply throttle connection attempts in a way that no human would be likely to trigger. Say 10 requests a second per IP. Then add additional filtering for very broad ranges, for example, if most of your customers are in the US, filter all other countries' IP addresses to a collective 20 connections a second.

Finally, review the status of connections when there is a problem and blackhole known bad behavior IP address ranges.

Still, even that can't totally prevent DDOS attacks. It can greatly reduce them though and that will make you a far less attractive target.

Not the answer you're looking for? Browse other questions tagged architecture web-servers server-security rate-limiting or ask your own question.

36
How are Apache HTTP Server and Apache Tomcat related? (If at all)
0
What are the PHP web server architecture components and the purpose of each one of them?
10
How to reduce tight coupling between two data sources
2
How can I run a script/subroutine on a Web Server and have that subroutine remain private (eg. Key Generator)?
0
User sessions in a web server; speed or persistence?
-1
Async web server and associated 'workers' implementation
1
Reduce server hit for reports by caching REST resources
1
Why and how are Server-side Web MVC and client-side/desktop MVC not the same?