Does "middleware" have two different meanings?

Does "middleware" have two different meanings and therefor is unnecessarily overloaded?

Or does the word have just one meaning or two very coherent meanings and I overestimate the differences?

I'd say that the meaning is coherent, even though the "exact" reference may differ. A middleware is basically a component that sits between other components and has the job of connecting the two through their own standard I/O mechanisms by knowing which kind of input they expect.

Use cases may differ, i.e:

There's more use cases of course but these are the most common ones and all others are similar, so I'd say the meaning is pretty coherent and the overall resemblance between the two is there as stated in the 1st paragraph.

Middleware makes it easier for software developers to implement communication and input/output, so they can focus on the specific purpose of their application

This is quite a poor article, but it does match my own experience. 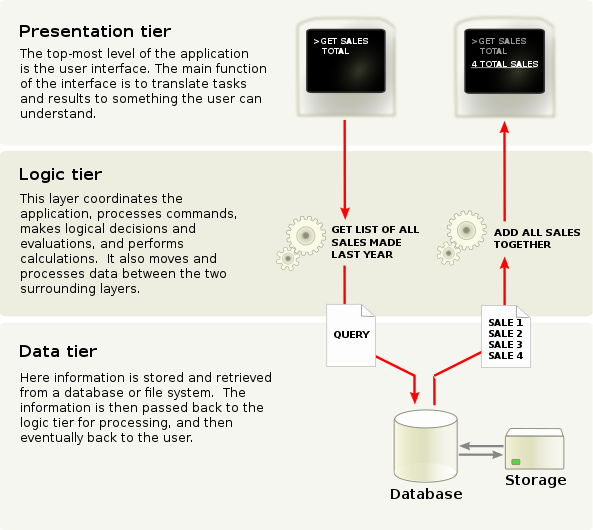 If you read the Multi-tier Architecture Wikipedia article (particularly in the simplified Three Tier section) is much more enlightening. It's better to describe middleware as the domain of software that is between the "Presentation" and "Database" layers. This is sometimes also called the "Logic" layer, the "Business" layer, "Application tier", or "Middle tier". This Middleware middleware layer is therefore fundamentally about "vertical" abstraction.

Within this Middleware layer there are many different ideas and implementations that themselves can be thought of as horizontal.

Pipeline: A horizontal implementation within the Middleware Conceptual Vertical Layer

Your "Microsoft ASP.Net Core Middleware" reference is quite specific. Node.Js ExpressJS has a similar architecture and ASP.Net Core is likely inspired by ExpressJS. Here, "Middleware" is used within the context of a server-side software and each step in the HTTP Request/Response pipeline is called "Middleware". It's sort of valid, but awkward. It's quite likely that the marketing department had a hand in that. "Middleware" is usually considered in the context of a "whole software system" as a vertical abstraction.

Not the answer you're looking for? Browse other questions tagged terminology middleware or ask your own question.

0
Selling middleware
1
Criteria When Evaluating Middleware
10
What is the middleware pattern?
28
What are the different meanings of 'fixture'?
2
Middleware dependencies
1
How does the concept of http middleware differ from events?
0
Are distributed file systems and naming services middleware?
2
Do persistent/transient communication and temporal decoupling/coupling mean the same?
0
DDD for middleware web application