How does .Net's Mono Framework, Work on Android

How do games (with Unity 3d) and Apps (Xamarin) written in C# (which require dot Net's Mono framework) run on Android?

The Mono runtime has been ported to the Android OS.

What exactly does that mean?

Is Mono Bundled with Android OS?

Is Mono Bundled with each App and Game?

According to this answer on Unity3d forum. It says Mono is similar to Java, in terms of being able to do cross-platform Software development.

This leads back to my initial question,

does android have two runtimes (Mono and ART)?

Here is a simplified version of the Mono Architecture: 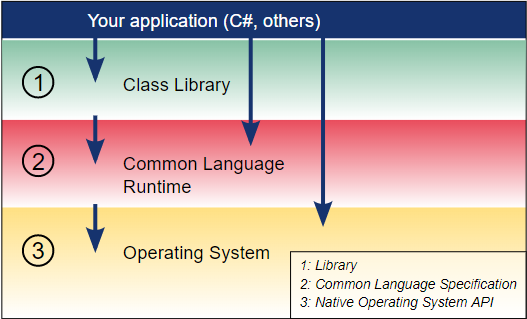 The heart of this architecture is the Common Language Runtime or CLR. The CLR contains a Just-In-Time compiler (JIT) that converts Common Intermediate Language (IL) into the native code of the platform it is running on. It serves the same purpose as the JIT in Java.

In practice, this means that you just need one C# compiler that will work for any platform. That compiler takes C# as input, and produces IL as its output. There is one CLR written per platform.

When they say that Mono has been ported to Android, what they mostly mean is that a CLR was written for Android. The Class Library (equivalent to the .NET Framework on a Windows system) is written mostly (if not entirely) in C# and IL, and since C# compiles to IL, the Framework should already be compatible.

Not the answer you're looking for? Browse other questions tagged java android mono or ask your own question.

22
Does Mono have a place in the enterprise world?
2
Should I use native android junit framework?
12
How can I find contract Android work?
13
Is Android a language or a framework/platform?
3
Does everyone need a framework to work better?
4
Why does Mono for Android cost money if the mono project is opensource and therefore everything based on it must be opensource?
4
How does recursive backtracking work ?