The spiral model is a risk-driven SDLC model. There are many diagrams that describe this SDLC model. Here is one of them: 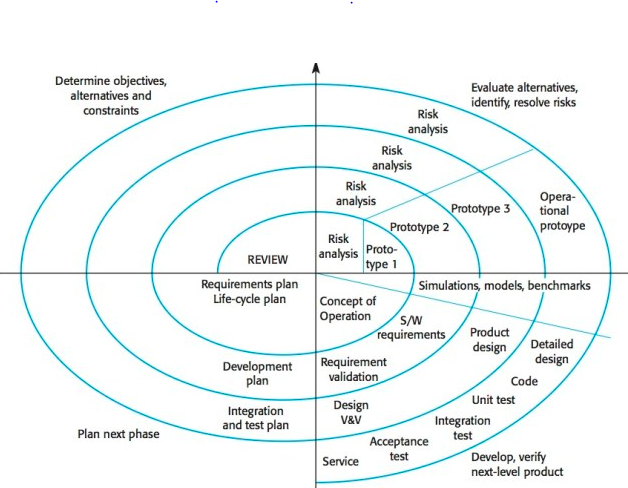 As we can see there are many iterations (one for concept of operation, requirements and so on), every iteration has its own prototype.

For example, there is a prototype associated with the requirements analysis iteration but what is the meaning of this prototype developed for this iteration? The same can be asked for the design iteration? So please someone explain these prototypes with an example if possible. One more question, how prototyping could reduce risks?

In the original paper of Boehm about the spiral model, he explains that the prototyping is meant for "building twice", a principle suggested by Royce in his paper about improving the waterfall approach.

Applied to a requirement analysis, the prototype can be as simple as a first mock, to explain and discuss the first ideas with the stakeholders. This is the same approach as RAD: with some tools you build a prototype that is not functional, but that allows to show screens to the users so that they can better imagine what is going to be build and fine-tune their requirements.

In the design phase, the prototype would entail some more concrete coding, to assess the feasibility and robustness of the architecture and some core ideas of the design.

This prototyping approach is very different from the incremental development that we are used to nowadays, and where you'd implement something that is really working to show to the user. A prototype is generally made for experimental needs and then thrown away: you'd see what works and what doesn't, and then you'd start to develop using the right approach.

About your last question, a prototype contributes to risk reduction in several means:

P.S: you may be interested also in this answer to another question

The modern take on prototyping that Christophe mentions is a "click-through" prototype made using tools that are purpose-built to build a prototype concept in a matter of hours. This is now a specialist designer skill set know as UX which stands for "User eXperience".

Not the answer you're looking for? Browse other questions tagged development-process sdlc or ask your own question.

-2
How is the spiral model to be understood?

5
Software development life cycle in the industry
8
What software development model has worked best for software teams with heavy dependancy on hardware teams?
7
Maintenance model for external artifacts
0
Best choice of SDLC
16
Did the need for software design specification significantly decrease with the evolution of more expressive programming languages?
2
Using business use cases vs user stories in a new requirement procedure?
1
Clarification on Spiral Model Steps
0
What’s the difference between incremental and throw-away prototyping?