Naming of union and intersection types in TypeScript

In TypeScript, the following is called a union type:

and this is called an intersection type:

For example, Person & Serializable & Loggable is a Person and Serializable and Loggable. That means an object of this type will have all members of all three types.

number | string | boolean is the type of a value that can be a number, a string, or a boolean.

If we have a value that has a union type, we can only access members that are common to all types in the union.

Q: Would it therefore not be more correct to switch their names?

No. These concepts come from functional programming and type theory, so to understand them, it helps if you think of types in a way that's more in line with that.

Informally, think of a type as a set of all the instances of that type. For example, the string type is conceptually a set of all concrete strings that you can construct, like "", "foo", "bar", "Hello, world!", etc. When you create an instance, it's like you are picking a single item from that set. If you come across some value, saying that it's of a certain type is like saying that it is contained in the set labeled by the type's name.

Now, when you define a union type number | string | boolean, you are practically doing a union operation on those three sets; you are saying that a variable of that type can be a number or a string or a bool - i.e., it can take some value from any of those three sets. In other words, you are pulling from a set which is a union of the three. 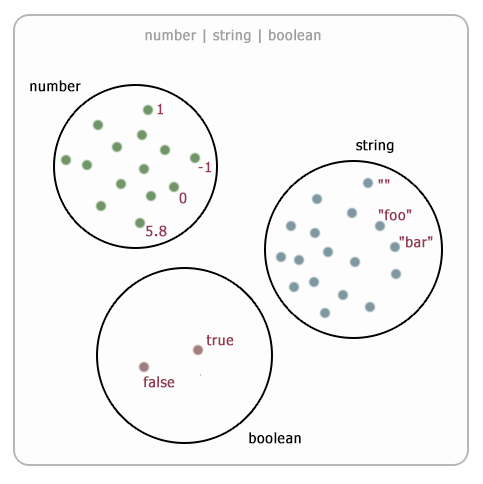 As for the intersection types, imagine, again, informally, placing things in sets based on what operations (and properties) they support. In JavaScript, if you call a method on an object, any object that has a method with a matching name and the appropriate semantics will work. TypeScript uses structural typing, meaning that it essentially follows the same principle (types are defined based on members), except that it adds support for compile-time checking. So, an object is considered to be of a certain type if it has the structure (methods and properties) required by that type.

This means that you can take a bunch of instances (objects), and group them into sets based on the operations they support. Some will belong to more than one set, like in the image below. When you write Person & Serializable & Loggable, you are restricting the set of possible values to only those that belong to all three sets simultaneously (and therefore support all these operations at the same time). I.e., you are allowing only those instances that are in their intersection. 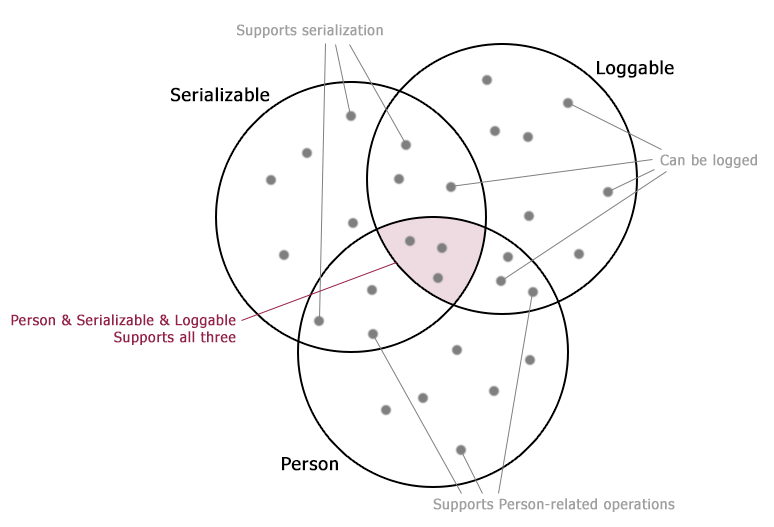 It would be a really bad idea to change the names of widely-used fundamental constructs. Intersection types have been studied since at least 1978, it would be extremely confusing after over 40 years to all of the sudden completely reverse their meaning, especially since their meaning is deeply rooted in type theory:

Values of type A & B has the union of the members of the types A and B.

That is, the values of type A & B are both of type A and of type B.

I agree it is confusing. In particular if we are used to union types in other languages. Unions in Rust, for example. Where a value of the union type can be treated as either type.

You can pretend union types in those languages have all the members of both types. However, they share the same memory space. Thus, you cannot really get all possible combinations of values of the members.

On the other hand, an intersection type in Typescript can only represent values that are of both types at the same time.

You are doing operations with the sets of possible values, not the set of members.

Not the answer you're looking for? Browse other questions tagged type-systems typescript unions or ask your own question.

17
Which statically typed languages support intersection types for function return values?
32
What's the tradeoff for type inference?
1
Finding types in TypeScript
4
Type of multi methods in a static object-functional language
1
Where should “conversion” functions be placed?
7
Is there a convention for the Optional/Maybe monad in typescript?
7
Is there a practical use for dependent types?
2
Where is the boundary between things which can be statically typechecked, and those which must be typechecked dynamically?