I have a question in regards to designing relationships in REST API's. Imagine I have a relationship like in this diagram 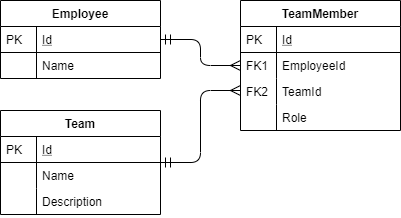 Now, should I show the relationship in the team endpoint like this?

OR should I have a separate endpoint for teammembers?

And, if I use the separate should I still include the teams and members properties in the employee and team endpoints?

should I show the relationship in the team endpoint like this?

There is no particular reason that your resource model should mirror your data model.

The question you are asking is a lot like asking "here is my data model; what should my web site look like?".

One way to look at that is to pay attention to caching, which is an important REST architectural constraint. You can look at the HTTP spec to understand how caching and cache invalidation work.

But the short form - if two pieces of information should be invalidated together, then they should be expressed in the representation of the same resource. If instead they have very different caching characteristics, then you probably want them separated, so that each can have its own caching meta data.

(Think "image in an html page"; its very common for a logo to have very different caching rules compared to the page content, so it makes sense for the logo to be a separate resource. On the other hand, if you have an image that is supposed to be synchronized with the content on the page, then you probably want to embed the image, rather than linking to it.)

But doesn't reducing the number of calls have any kind of benefit? Or does that fall into the category of premature optimization?

No no no -- we're talking about caching, we're already in the world of optimization, so don't fret that.

The question here isn't about benefit, it's about tradeoffs. You do A, therefore you get B, but doing A also inhibits C, so you don't get that. So now you need to start doing the legwork - is the difference between B and not B more favorable than the difference between not C and C? Can you also get D? and so on.

Using a coarse-grained DTO reduces the number of round trips you need to make to fetch the data once, but it also increases the amount of data that you need to move to keep your local copy of the data up to date. At a finer grain, you need more round trips, but those trips are smaller, and you can tune them more precisely (for example, by moving some resources out to a CDN).

The list of questions updates all the time; the layout (and the java script supporting the layout) changes occasionally; the branding images haven't changed in ages.

Do we really want a single coarse grained policy for all of that? Or are we willing to accept some extra round trips now in exchange for smaller ones later?

Expressing the same idea another way: none of this matters if your data is static. The interesting choices come from change, and in particular from varying rates of change.

Like all things, that is dependent on your requirements. Both options are valid and reasonable on their own. You haven't provided any detail that would suggest one option over the other.

To help with the decision, here are some things to think about:

Bottom line: Decide what your Minimum Viable Product (MVP) is, and evolve from there.

Not the answer you're looking for? Browse other questions tagged design rest api api-design or ask your own question.