Is there multiple definitions for responsibility of class?

In the book UML 2 and the Unified Process from Arlow and Neustadt has been told: Analysis classes should have 3 to 5 responsibilities

But as you know we have the SRP that tells us something else!!

why so happend? I'm confused

Which of the following deductions is correct?

These are using these terms in a slightly different way, but they are trying to convey similar underlying ideas.

Here's a quote from the book you referenced (emphasis mine):

Going back to the ShoppingBasket example, you would expect this class to have responsibilities such as

Now, you could also add [... some other ...] responsibilities to the ShoppingBasket [...]. But these responsibilities do not seem to fit with the intent or intuitive semantics of shopping baskets. [...] It is important to distribute responsibilities appropriately over analysis classes to maximize cohesion within each class.

Finally, good classes have the minimum amount of coupling to other classes.

They are essentially talking about achieving high cohesion and low coupling - the goal is for typical changes to be localized and low impact (e.g. in a single class, rather then spread out throughout the codebase, without cascading changes to seemingly unrelated code).

So they are saying that each class should have one "high level responsibility".

SRP originally stated that a software module should have one responsibility; Bob Martin later decided to clarify "responsibility" as "reason to change".

As with all the principles, their single-sentence statements are really a neat way to remember them and talk about them; but to understand them, you have to go beyond that and dig a bit deeper into the underlying ideas.

The primary point of software design and its principles is to have some control over complexity that arises over time due to change. If the code never changed, design wouldn't matter all that much.

In any domain, there are things that cause change. E.g. a business for which the software is being made might need certain features; but businesses have their own way of doing things, and they want the software to support that. One set of users might need one set of features, and another set of users (maybe from another department) might need a different set of features. They might have certain business processes already in place, and they might want the software to automate some parts of that - and if the developer team didn't spend enough time to understand those processes (how they do things) and their business (why they do things, how they think about concepts) the software is going to be conceptualized and structured/developed in a way that makes it hard to make the kinds of changes that they'll need - because the code will be based on the wrong set of abstractions (these are hard to change), and it will therefore be coupled in the wrong kinds of ways. You can't have code that supports all imaginable kinds of changes. You make it support certain kinds of changes by making it rigid for other kinds. Design is about tradeoffs. The trick is to be conscious/intentional about this.

You can think about these factors that drive the direction of change as the "forces of change", or "axes of change". These are often driven by people, organizations, their policies and politics, etc. That's where and how humans come into the picture. To quote Martin's article: "who must the design of the program respond to?"

The idea is, initially, to understand the domain enough to recognize some of these axes of change, and design around that. This will in part be based on domain analysis, in part on experience. It is important, however, not to over-engineer at this point: don't consciously make assumptions about domain aspects you don't yet have a good understanding of.

But it doesn't stop there. Since agile development is an iterative process, you'll be learning about the domain and the system as you go along. You'll discover that there are axes of change you didn't account for, or that some of the ones you anticipated are not so important because they rarely cause change in practice. Or that you've made some wrong assumptions, and that they now give you trouble. You have to decide when, where and how to restructure your code based on this new knowledge - in a "wait for the last responsible moment" fashion (before the coupling and complexity goes out of control). This is why we have heuristics like YAGNI and "wait for three examples of something before you abstract it or DRY it up". Doing this is more important in those parts of the codebase that have proven to change the most over time, in other parts less so.

When you write a software module, you want to make sure that when changes are requested, those changes can only originate from a single person, or rather, a single tightly coupled group of people representing a single narrowly defined business function. You want to isolate your modules from the complexities of the organization as a whole, and design your systems such that each module is responsible (responds to) the needs of just that one business function.

This is why "responsibility" in SRP has to be defined in a somewhat abstract way - you have to discover how to partition the code into classes (or other kinds of components) for the specific application you are developing.

You’re attentive reading and analysis has helped you to spot a common misunderstanding. Congratulations!

The right case is 1: the authors use the same word with very different definitions:

In my view, Uncle Bob could have named his principle less ambiguously as “Single Concern Principle”, since the separation of concerns is its aim. The alternate wording proposed by Uncle Bob himself in his article clarifies this without any reference to a responsibility: "Gather together the things that change for the same reasons. Separate those things that change for different reasons".

Edit: Can we stay objective please ?

In view of the heated discussions (already 2 downvotes for an objective and documented answer) and speculations in some other answers, I'd like to go back to some definitions, since that's what the question is really about.

The question starts with UML. Grady Booch, Ivar Jacobson and James Rumbaugh, the fathers and inventors of UML published 1999 in the Unified Software Development Process:

Page 182: An anlysis class (...) behavior is defined by responsibilities on a higher, less formal level. A responsibility is a textual description of a cohesive subset of the behavior defined by a class.

Another very commonly used definition of responsibilities comes from the CRC cards invented by Kent Beck and Ward Cunningham, two fathers of the agile movement, and published September 1989:

Responsibilities identify problems to be solved. The solutions will exist in many versions and refinements. A responsibility serves as a handle for discussing potential solutions. The responsibilities of an object are expressed by a handful of short verb phrases, each containing an active verb.

As you can see, there may be several such responsibilities for an object in their expert view. Note that this article refers explicitly to Wirfs-Brock's article, also published in September 1989.

Rebecca defined the responsibilities by analogy to contracts:

It focuses on the contract by asking:

Again, the objects are seen to naturally have several responsibilities. She continues by explaining that some of these responsibilities may be delegated to other objects.

Among other authors using Wirfs-Brock's concept of responsibility, you will find for example GoF, a reference for good software design. For every pattern in their book, they describe a list or participants with their responsibilities, as well as the collaboration between these participants. Take for example the desciption of a concrete decorator (I highlighted the plural):

Is there multiple definitions for responsibility of class?

In short, yes. That's true of most words, and while logical sciences often tend to be much more rigorous about its nomenclature, there are still some ambiguous namings. You have stumbled on one of them.

What matters here is the boundary (granularity) of what is considered to be a responsibility. Different scenarios (e.g. a family owned restaurant versus an industrial kitchen) will favor different approaches.

Analysis classes should have 3 to 5 responsibilities

I don't have access to the book you have, but this seems founded on the CRC modeling approach. Here, you can see that a "responsibility" is not used to describe a class' reason for existing, but rather particular behaviors of a given class.

Take a look at the included image. According to the CRC model, a customer has 5 responsibilities and an order has 6. 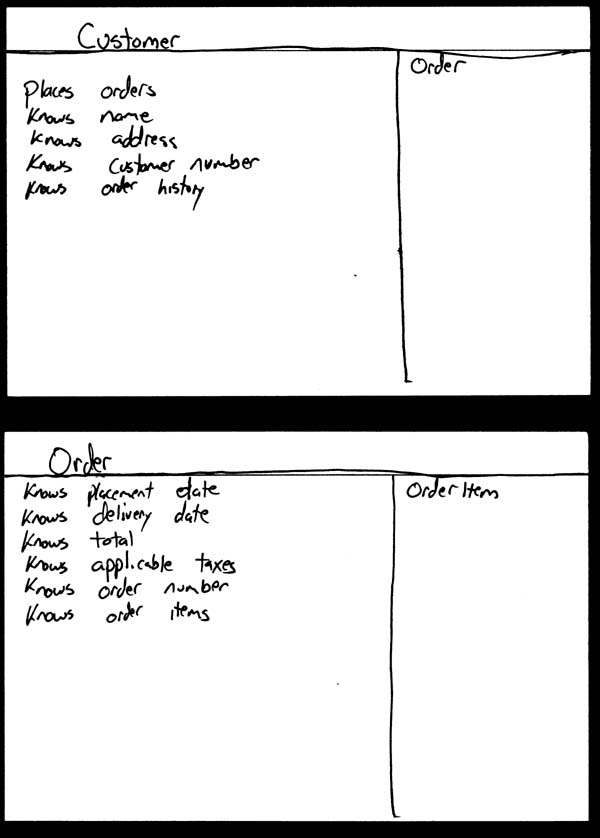 But as you know we have the principle SRP that tells us something else!!

It's the same thing but described differently.

Consider what matters to you. Does your application consider every cook to be capable of making every dish? Of does your application expect that each cook can have a particular expertise? These kinds of considerations will lead you do define your responsibilities at the appropriate level, i.e. only as fine-grained as is meaningfully relevant for your scenario, not more.

I did not read that book, but when I hear of "UML" "Analysis classes", I think of classes used by some business analyst for requirements modeling, nothing more, nothing less (if you who has read the book think I got this totally wrong, please leave a comment and I will delete my answer).

I take the freedom and cite an example from that blog article already mentioned by Christopher: 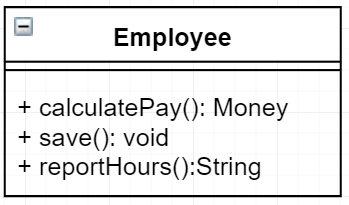 During a requirements analysis, it is perfectly fine to use a class like this in an UML diagram! So this is a valid "analysis class".

Applying the SRP already on this level of abstraction would often lead to lots of classes with just a single method and no difference between the class name and the method name, so no apparent value.

But when Robert Martin talks about the SRP, he has IMHO the kind of classes in mind which will really occur in code, when these requirements will be implemented. The "analysis class" above is something one would probably not find in Bob Marin's code after he applied the SRP.

Instead, I would expect to find classes in his code like

Martin's article explains well why it is good idea to separate these different responsibilities into classes to allow maintenance and evolvement of the system, with a lower risk of breaking things when changes have to implemented afterwards. That is where the SRP makes most sense!

This is what I meant with my comment under your question, and why I think "case 2" is the correct answer. However, since I don't have your book, it is perfectly possible that the authors meant something different and case 1 applies as well, but that is not a necessary explanation.

44
What is the real responsibility of a class?

10
Single-responsibility and custom data types
2
Something confusing about Single Responsibility Principle
2
Coupling business logic with class definitions
6
Clean OOP-Design: How to implement single responsibility and no procedural programming
13
Large class with single responsibility
0
Does putting AddCustomerData, GetAllCustomers and GetCustomerByID in one class violate SRP?
12
Is there a conflict between YAGNI and SRP?
4
How to find the classes in an object oriented project?
2
Splitting class responsibilities without exposing private data