I have these classes and I want to instantiate each one of them easily.

All the data to create them are in a json file and there will be a lot of different objects in the end. Each objects have a lot of attributes, I would prefer using a helper. A, B and C can be instantiated and used separately even if A might depend on a C object (or B). 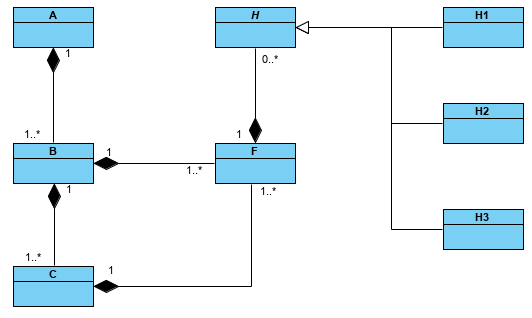 First I thought that a factory method would suffice.But each one of them has a lot of attributes and since A depends on all the other objects it would be a mess.

Then I thought that a pseudo-Builder would work best since it would let me set every attribute one by one while I parse the json file. This works but it means that every class has its own builder and I would need to handle the builders dependency when I parse everything.

There are solutions but I would like to find something more elegant and not create objects that I don't need. The other thing is that the parser is Abstract and implemented by the one using the library (needed for several reasons).

My current solution is a pseudo-builder (simple inner-class that lets me setAtt1(...).setAtt2(...)...Build()) for each class and one Factory that has createA(id), CreateB(id), CreateC(id) and an actual builder pattern for H1,H2,H3. The Factory is a realization of the Abstract JsonParser class that the user needs to implement thanks to the Builders.

I'm not looking for the definitive solution but I would like some advice on my solution and if I am making a big mistake on how I handle things.

factory builder-pattern
Share
Improve this question
asked May 5, 2020 at 14:10

This problem is reminiscent of the old XML configuration files that used to wire components together in the early to mid 2000s. The basic approach was rather simple:

Microsoft's XAML also falls in this pattern, but they have provided a means of expressing attributes as elements as well to handle complex values.

The main thing I would look at is keeping a good separation of concerns:

This distribution of responsibilities helps each class be focused on one part of the process, making it easier to maintain. The Parser has the simplest job, rendering the text into a set of objects that can be traversed. The object mapper then takes that tree of objects and calls the Resolver to either look the object up from the registry, or build the object from the factory (the raw object gets added to the registry at that time). The object mapper then attempts to set the properties as needed.

The approach allows you to declare objects in one place, but reference them in another place.

You really need a simple set of rules to make this work:

You can use a reflection API to actually perform the setting and getting. That allows you to iterate over the attributes in your file and map them to object properties with one mapper. Reflection is typically slower, but if this is something that gets built up once and re-used then that speed penalty is probably worth avoiding the headaches of writing 1 factory per object.

Evolution of parsing to improve memory and maintain usability

There were a couple standards back then that helped minimize memory overhead during this process. It was clear that the Document Object Model (DOM) parsing wasn't going to scale for very large complex systems. That introduced the Simple API for XML (SAX) parsers that called methods to signify the begin and end of objects. This approach also worked well.

The last evolution, may be what you are looking for. That's the Streaming API for XML (StAX). The key difference here is that it combined the memory efficiency of SAX parsers, with the ease of use of working with a DOM.

Not the answer you're looking for? Browse other questions tagged factory builder-pattern or ask your own question.

22
How can I promote the use of the Builder pattern in my team?
13
Is it strange for a Builder object to have getter methods?
5
Is mixing Builders and Factory pattern a good idea?
2
Builder with constructor or factory method?
0
Reset state or create new objects
2
Creational design pattern that allows configuration of objects
2
Abstract Factory with Pure DI
1
Can a GoF Builder implementation be considered valid without an explicit getProduct()?
0
Can a class be considered as a factory even though it only creates one concrete type of objects?