How to reduce the merge-redundancy due to testing in our Git workflow?

We have are a small team of 6 people working with Scrum and Git.

We are developing a quite complex webapplication with the ZK Framework. It uses Java and a MySQL database.

We have adapted the "Git workflow" by Vincent Driessen from:

This results in the following diagram, showing our model: 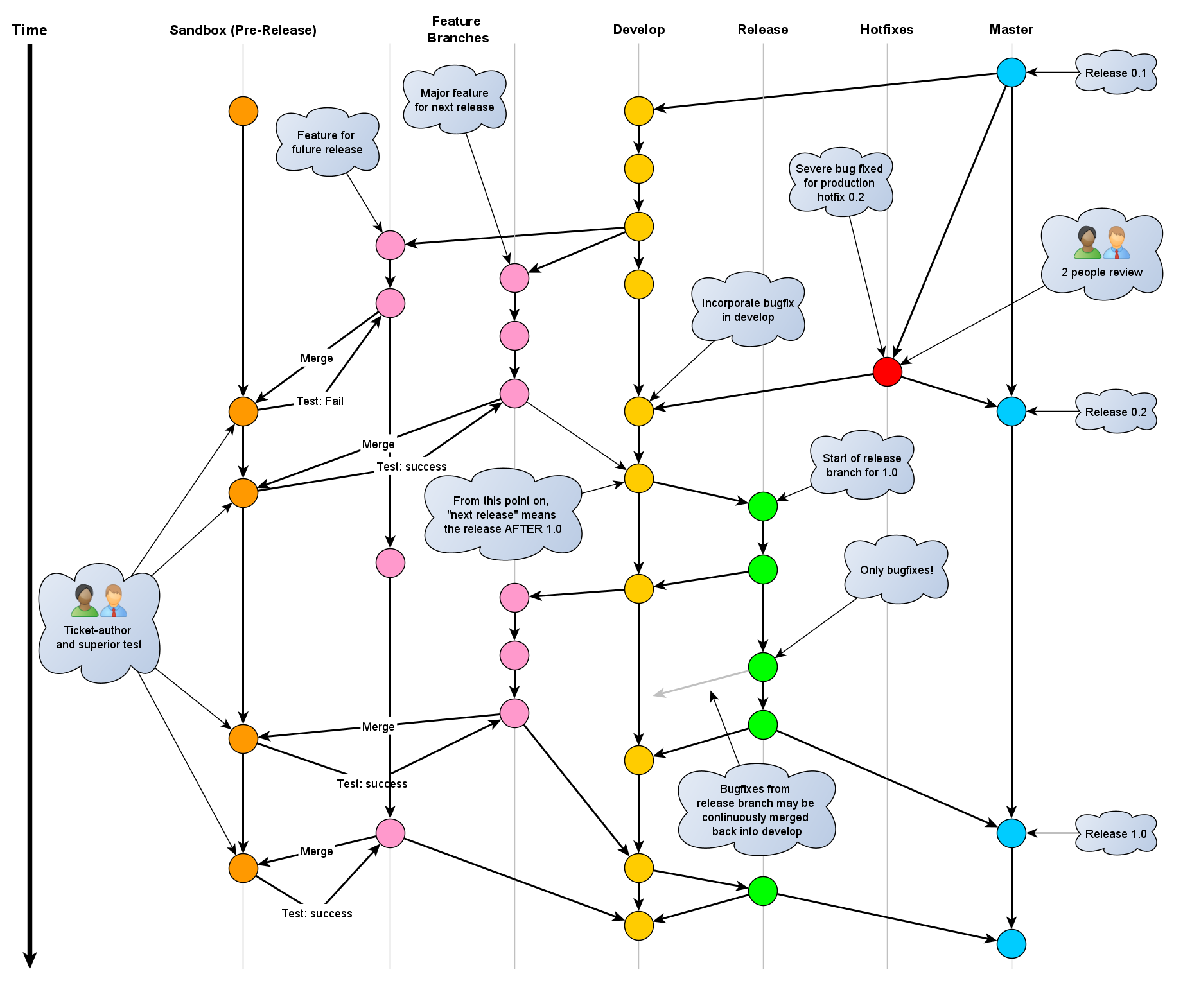 When we develop a new feature, we branch off of the "develop"-branch.

After a feature has been completed, we do 2 stages of testing - internally (the developers) and externally (the customers that suggested the feature).

For the customer-test, we have a "sandbox", which is more or less a 1:1 copy of our live-system. It has it's own database and branch.

It has it's own branch "sandbox" and is sort of a "pre-release".

We have 1 person doing the merges from the feature-branch into the sandbox-branch, including solving all merge-conflicts.

(We know this is not scalable and soon every developer might need to merge + conflict-solve their own feature-branches. We are still learning and adapting)

Then the customer goes into the sandbox, tests the feature and says either "fail" or "success".

2) Success - we close the feature and merge it into develop.

And this is where we are not sure if this process is optimal - you basically need to merge + conflict-solve at least twice, because while testing on the sandbox, the develop-branch keeps getting new commits, which often can result in the feature-/sandbox-version being different from the develop-verson -> merge-conflicts.

Is there a way to solve this more elegantly?

And / Or is there a way to reduce the merge-conflicts?

No data flows back from sandbox into the feature. The arrows labeled "Test: Fail / Success" are merely used to show that the customer tested it and gave his "okay".

We also do not develop on the sandbox.

As your image shows, the Sandbox branch can contain commits from (multiple) unfinished features. This means that in practice, what gets tested is never the same as what gets merged into develop nor the result of merging a feature into develop.

Your features may have been independent enough that this didn't bite you, but someday it will. And the fact that you encounter merge conflicts on both merges suggests that one of two things is happening and neither is desirable

As a way forward, I would recommend that you abandon the Sandbox branch. Instead, you configure the sandbox environment such that code from any branch can be installed on it. And next to that, you implement a reservation mechanism, so that people know when the customer is testing a feature and they shouldn't change what software is running in the sandbox environment.

I don't have access to the image but from your explanation I understand that "sandbox" is a fork of "master" where features are merged to be tested.

IMO the best solution is 2. but is not always an option. 1. is using develop as a beta branch but may force some developer to keep some feature branch branch open if they miss the window to merge before a release.

Others have pointed out that your sandbox branch is flawed, your diagram even shows code being merged into and passing its test when the code is in a failed state from the previous feature.

However, I think you have bigger problems

[feature is merged into sandbox] Then the customer goes into the sandbox, tests the feature and says either "fail" or "success".

Having customer acceptance per feature, regardless of branching strategy, is going to be super hard and cause lots of merge problems.

The reason is that features are not developed one at a time, or in isolation from each other.

If you test feature A and it fails, and test feature B and merge it in. Now feature A has to be retested with the B changes and then with C, D etc if they don't complete fast enough. Before you know it you have a super long lived feature branch which is always having to merge and test

Unless you work on a single feature at a time You have to have some grouping of features into releases and test the release rather than individual features.

Pulling a feature from a release is a big decision, because of the knock on consequences on the other features. You can't let the customer decide at the last minute. Get them to agree the features they want in the next release.

Merge into develop and use feature flags to hide the feature. Deploy develop to the sandbox environment and enable those feature flags there. Develop can still be deployed to live with other changes as necessary, just don't enable the new feature. This means you are only merging once.

As some have said this way of working is problematic but threre are a few things that you can do to minimize the problem:

Not the answer you're looking for? Browse other questions tagged testing git gitflow or ask your own question.

16
What's the best way to undo a Git merge that wipes files out of the repo?
2
Git branch model critique: always derive from master
3
Merging from unfinished feature branches and code review
0
Why does git branch workflow merge into the production branch
4
Managing QA testing when there's pressure to merge things at the earliest possible
2
Git workflow for demoing features before release
3
With the "git flow" approach, why are release branches merged into develop?
2
Which git workflow for micro-services and testing
1
GitFlow question about develop and hotfix branches
2
Git tags as an alternative to --no-ff in gitflow