In 1970, Edgar Codd published his landmark paper ‘A Relational Model of Data for Large Shared Data Banks’ where he defined relational databases as well as their normalization to first normal form (1NF) in section 1.4, page 381. It is a procedure for eliminating non-simple domains (domains whose elements are relations) from a set of relation schemata (i.e. a database schema) in order to allow simple two-dimensional array representations without pointers. 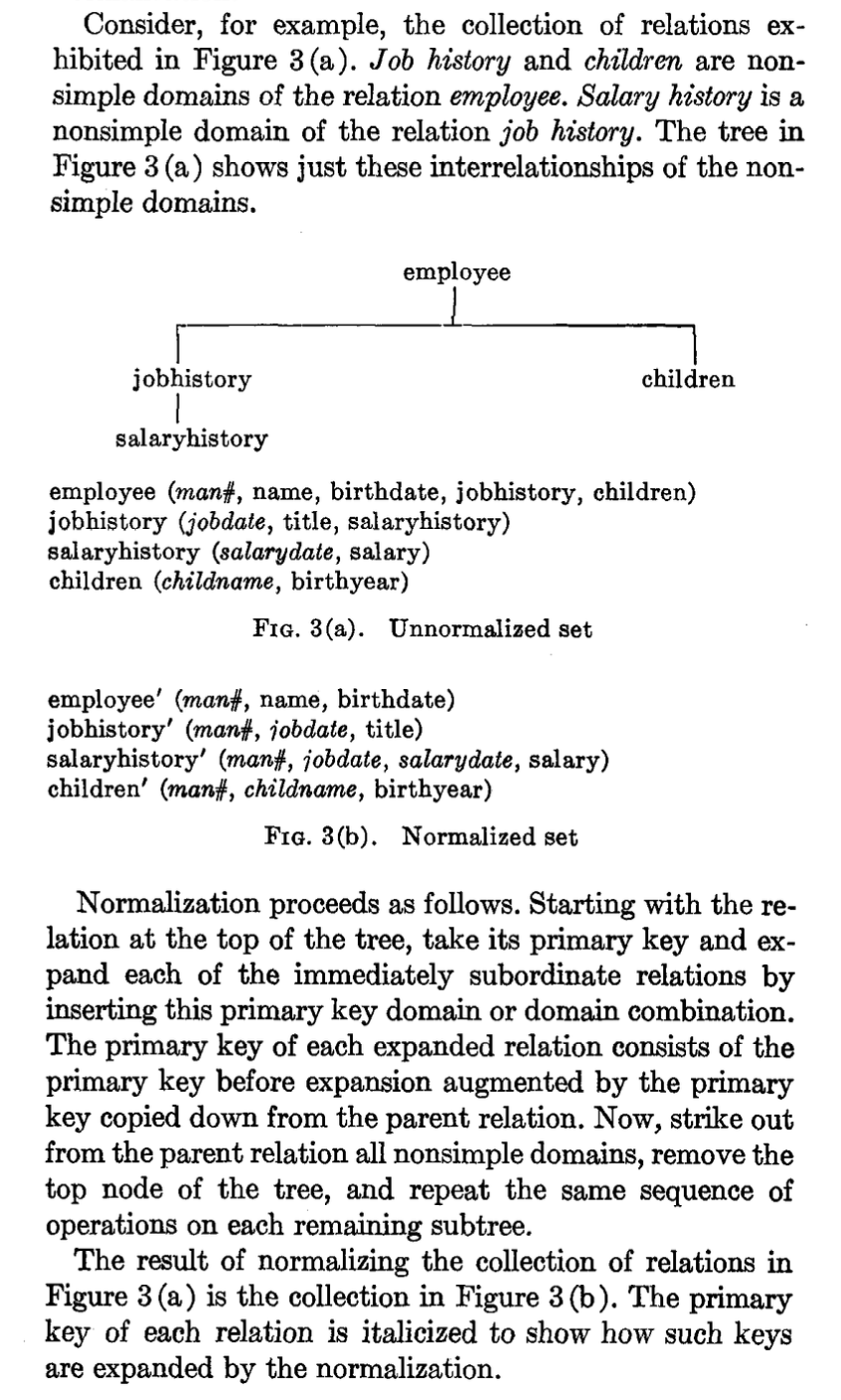 I have applied this 1NF normalization procedure to the following six database schemata modeling music recordings.

R1 > R2 denotes a non-simple domain relationships such that the relation schema R1 has an attribute R2 whose domain constraint is described by the relation schema R2 (i.e. it is a relation-valued domain). For instance in Codd’s example, we have the following non-simple domain relationships: employee > jobhistory > salaryhistory and employee > children.

Which of these six normalized database schemata makes more sense?

Both need some further normalization work if you want a fully normalized model.

To get to further normalized database, we would model both entities and relationships using their own tables.

The first three are simple entity tables, and, the latter two are relationship tables, capturing the relationships without duplicating any other info from albums, artists, or songs.

artists_x_album can be derived from the above using a larger join.

Of course, due to the nature of relational queries, given a relationship table we can traverse an M:N relationship a_x_b bidirectionally from an a to its bs and also from a b to its as.

In some but not all cases relationship tables need their own id; not shown in the above (there are only foreign keys).

There is a lot more to consider, of course. Authoring a song and performing/publishing a song are potentially different, for example. Songs are sometimes released without an album.

You are missing a couple components in your model that represent the relationships between your artists, songs, and albums. These are sometimes referred to as associative tables.

And your associative tables:

The associative tables embody the many-to-many relationships that others have pointed out.

Note that for some types of music, the above may not be enough. For example, for some kinds of electronic dance music, there is an artist credit for the album but not for the songs (e.g. a DJ who put together the album but did not write any of the songs). For that you might need three associative tables instead of two:

And in addition maybe you want to keep track of what role each artist had in a song, e.g. if they sung or wrote or played the bongos. For that you would add a role attribute to the artist credit table for songs and a domain table:

These are just the basics. There is a lot more complexity in the music industry, and you would have to decide how much to build into your model. To give you an idea, I would recommend you review the work of someone who has already dealt with this, e.g. take a look at the Spotify object model.

There are two questions which are actually separate:

(I assume in your notation ">" indicates a one-to-many relationship, i.e. "artist > album > song" means one artist to many albums and one album to many songs.)

Variant 1: One artist can have multiple albums and one album have multiple songs. The seem like a reasonable model, although it would not be able to express if multiple artists collaborated on the same album or song.

Variant 2: A song can occur on multiple albums BUT an album can only have one song. This is not a very useful model!

Variant 3: An album can have multiple artists BUT an artist can only have one album.

Variant 4: A song can have multiple artists BUT an artist can only have one song!

Of these 6 variants, only variant 1 would be reasonably useful, if a bit simplistic.

You might be missing this in the analysis, because Codd's example does not have any many-to-many relationships, all the connections are one-to-many.

This might not be immediately obvious to a modern reader, since the connections in his diagram (fig 3a) does not have the cardinality (one-to-one, one-to-many, many-to-many etc.) explicitly stated as we probably would today. But the context of the example is a hierarchical database which only support one-to-many relationships. In any case, the ambiguity is resolved in the normalized form (fig 3b) where it is clear that there is a one-to-many relationship between employee' and children'.

It might seem weird that his data model does not consider that two employees could have a child together. Maybe it is a payroll database where the number of children might be important for benefits, but whether two employees shared the same child would be irrelevant. Or maybe he just didn't consider the possibility. In any case this is just an example.

For the music recordings database you also have to decide on a data model. Be aware that there is no "correct" data model for a given domain. A data model is always a simplified view of reality and depends on the requirements on your database and application.

Can an album have multiple artists? Can a song have multiple artists? Can an album have songs which are not by the same artist as the album artists? If a song occur on multiple albums is this the "same" song? These are "business" decisions which depends on the purpose of the database. A record shop might need to decide on a single artist per record in order to organize the records alphabetically per artist. A digital music library does not have such a constraint and might instead record artists per song rather than album. Should you include producers, song writers, session musicians etc? It all depends on the business requirements of the database.

Assuming a simple model where an album only have a single artist and all songs on the album by the same artist, the model presented as variant 1 would be sufficient.

And this would be a normalized representation:

You should clarify what data model you want to represent before starting to normalize.

You need to take the approach that this is an established paper, from 50 years ago, and try to understand it, as it is (as it was, fifty years ago).

In 1970, Edgar Codd published his landmark paper ‘A Relational Model of Data for Large Shared Data Banks’ where he defined relational databases as well as their normalization to first normal form (1NF) in section 1.4

Which unfortunately none of the academics and theoreticians have articulated, in fifty years of various textbooks and filth.

It is a procedure for eliminating non-simple domains (domains whose elements are relations) of a collection of relations in order to allow a simple two-dimensional array representation without pointers.

2. The goal or purpose is not to "allow a simple two-dimensional array representation without pointers", that is simple enough to obtain via a SELECT, from any set of relations. That is just a capability of the Relational Model, not a goal.

I have applied this normalization procedure to the following variants of collection of relations modeling music recordings.

No, you have not applied that Normalisation procedure.

That is a completely separate question, regarding data modelling, using a given collection of data (not six), which are in bad shape.  You have not even specified which attributes you intend as Keys.  It has nothing at all to do with understanding Codd's paper, or understanding how to obtain Relational Key NF.  It is simply,

which of these six variants is best ?

No criteria for choosing better or best is given, so it is a free-for-all with the responders trying to help, and no Answer is correct.

The attributes are not good, so you are better off collecting more relevant data, and asking a single data modelling question.

Another way of stating that is, your six variants are merely an attempt to understand:

You need to understand a bit more re your snapshot fragment of the RM. Since you are asking questions about it, first I provide the file structure of the best-known HDBMS of the era, IBM's IMS.

Now an explanation of Codd’s Fig 3(a). Straight out of the Hierarchic Model, but perceived logically.

If I cut to the chase, if I use data from the real world (ie. your six variants, normalised, plus relevant Identifying data), this is what the finished product would look like.  This is an example, as per your six variants, it is not a fully researched industry data model. 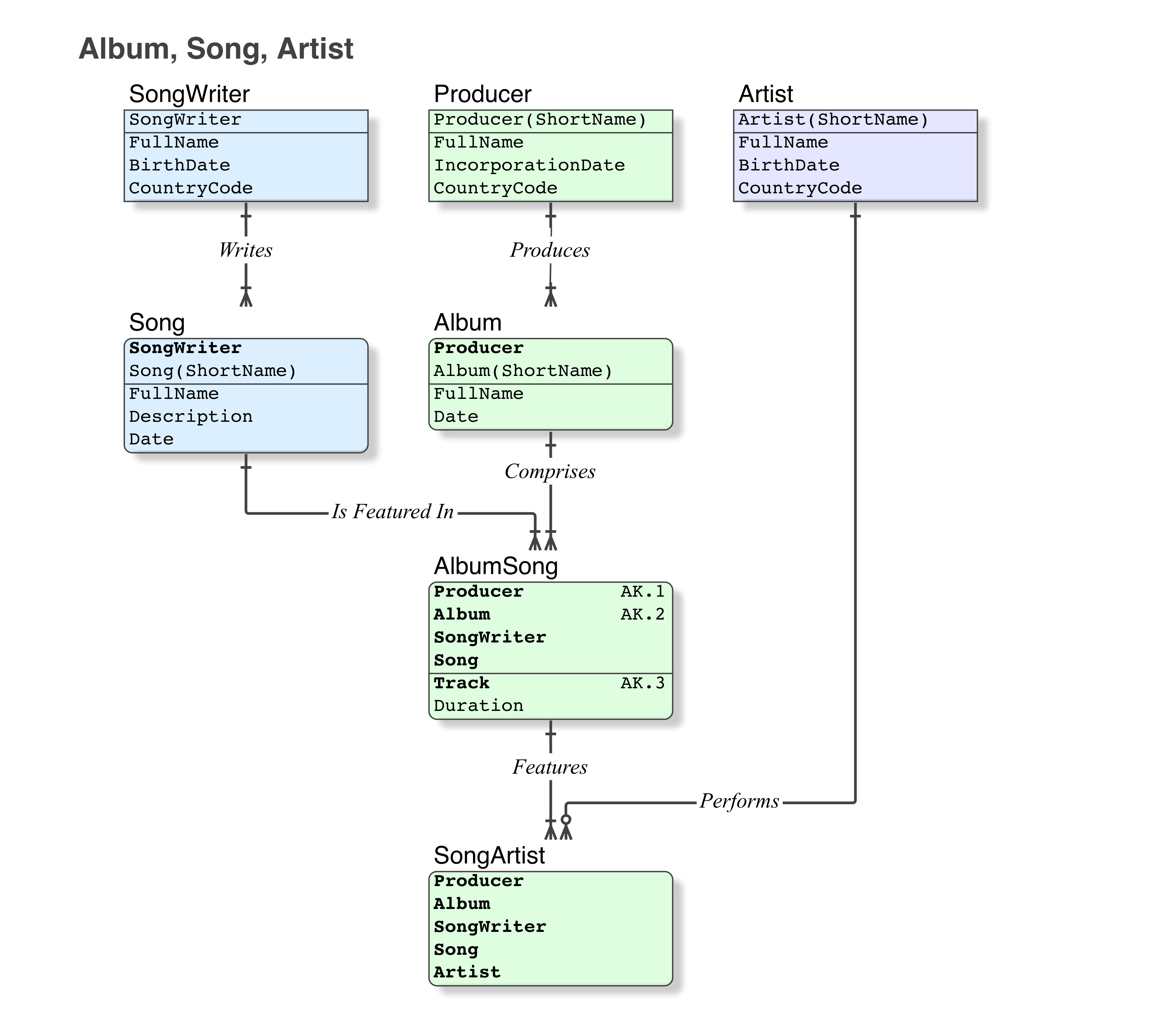 Everybody in this post claims that the previous relation schemas prevent many-to-many relations and are not normalized beyond 1NF and therefore promote data duplication, while their ‘associative’ relations schemas do not have these issues:

Not the answer you're looking for? Browse other questions tagged database-design relational-database normalization or ask your own question.