What does "common interface" mean in OOP?

I have seen the term "common interface" used a lot while reading books about OOP.

For example, the book The Essence of Object-Oriented Programming with Java and UML says the following:

My understanding of the term "common interface" is the following:

Assume that we have a superclass (or an interface or an abstract class) called Animal and two subclasses called Dog and Cat, and Animal have two virtual methods called makeSound() and move().

Now the common interface would be composed of two methods which are Animal.makeSound() and Animal.move().

Assume that we have the following code:

The explanation of the above code is the following:

Animal animal1 = new Dog() creates an Animal common interface and associate a Dog object with it: 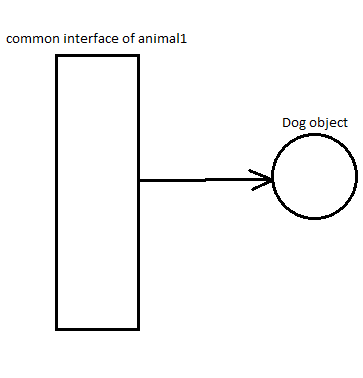 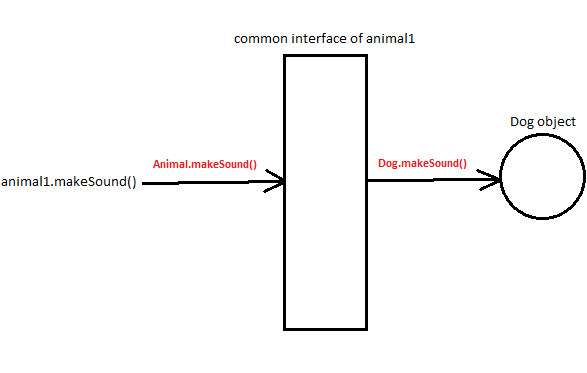 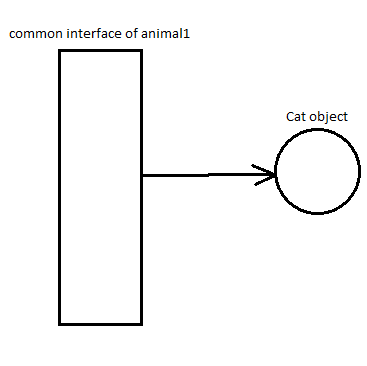 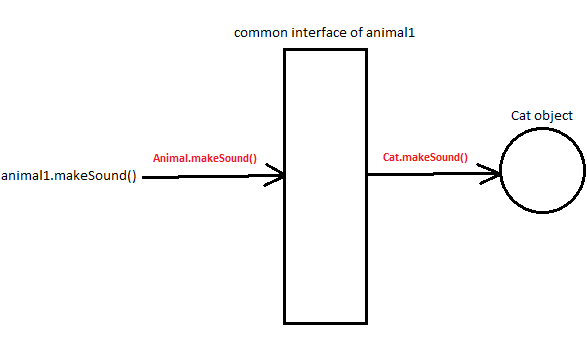 Am I correct in my understanding?

The Animal common interface in my diagram is not an object, but rather it is the virtual methods (or I guess I can call them the "message handlers") that receive the Animal.makeSound() and Animal.move() messages and then send the appropriate messages to the associated subclass object.

The term "common interface" is a way of describing the fact that Dog and Cat happen to share some of the same characteristics, and that these shared characteristics can allow these to be used interchangeably in code. (provided that there are no Dog-specific or Cat-specific characteristics involved).

To shift to another very simple example, most programming languages have data types called int and double - these nearly always share a common interface because they can both be used with the 'BODMAS' arithmetic operators despite the fact that integer representation and floating-point representation work very differently to each other.

In the given example of animal1.move(), animal1 is just a plain variable (i.e. a name) - it has no behaviour of its own. It's a simple programming language construct which acts as a name/alias for an object, and which enables a programmer to write code that uses/interacts with an object

A better analogy for the term interface could be when thinking about how a human interacts with a car while they are sitting in the driver's seat. From a driver's point of view, all cars have a common interface for someone driving the car:

These are all characteristics of any car, however, any individual car will always have their own Steering wheel, pedals, lights, etc.

The term "common interface" is conceptual rather than physical (the interface isn't separate from the object, it is part of the object) - the common interface of a car means that any qualified driver of one car is able to seamlessly take control over any other car without needing to adapt their understanding of how to drive. The rules and actions involved in driving one car do not change when switching to a different car.

Technically incorrect though. The message isn't sent to an Interface and then on forwarded to the instance.

When the caller holding Animal a then makes a call a.makeSound(). The caller knowing about Animals follows the protocol and gets the behaviour to call. In this case its Dog.makeSound(). It then calls this Dog implementation directly.

7
C++ Design: Functional Programming vs OOP
38
Understanding "programming to an interface"
24
Patterns for propagating changes up an object model..?
2
Is it OK to deprecate methods that need to be public due to the packaging model but are not to be used outside the codebase in Java?
3
If Class is to define attributes and methods, and Interface is to define (a set of) methods, then how to think of interface needing new attributes?
2
How is MPI related to "message passing"?
10
What are the responsibilties of the main in object oriented programming?
2
OOP: Concerns about extensible design based on Interfaces
14
How to handle the methods that have been added for subtypes in the context of polymorphism?