Why is an interface in Java called an "interface"?

I am not sure why an interface in Java is called an "interface", but I think it can be one of the following two reasons (or both):

This tutorial says the following:

Methods form the object's interface with the outside world

The word "interface" in the real world means the following (I got this definition from Google):

For example, imagine that we have a Java interface called Animal that have two methods called move() and makeSound(), and we have a Cat class and a Dog class and both classes implement the Animal interface. 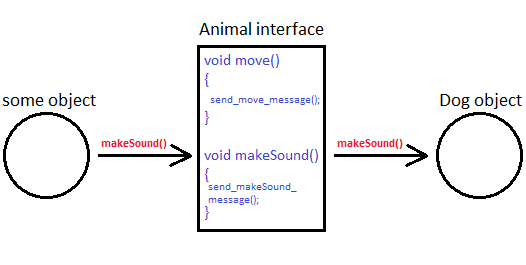 For the sake of keeping the answer simple, let's say that the only cars that exist are personal vehicles with an automatic gearbox, and let's exclude stick shift and larger vehicles such as buses or trucks.

Well, simply put, because all these cars have exactly the same layout. Every car implements this same layout, which is why you can change cars and still know exactly how to operate that new car:

What I have listed here is a complete list of all interactions between a driver and a car that are required for a driver to correctly drive that car.

This "list of possible interactions" is what we call an interface. When you look at both definitions you supplied, you'll see that they fit with my example:

Methods form the object's interface with the outside world

The pedals/steering weel/gear stick are the only points where a driver and car interact with one another.

We need to be very careful with our words here. Some real life examples exist where an interface is an object between two actors, e.g. how a translator facilitates communication between two people who speak different languages.

However, in programming terms, the predominant example is where one actor owns another actor, rather than them being two "cooperating" individuals. In this case, the interface is actually referring to (part of) the owned actor itself, rather than a separate layer that sits inbetween them.

Pedantically, your class doesn't need to implement an interface to "have an interface". Class methods are an "interface" by themselves, as they describe how a consumer can interact with this class.

However, this scenario invariably ties the class and the "interface" together, i.e. this so-called "interface" only applies to this specific class, and each class has its own "interface".

That's not very useful, since it completely excludes the possibility of multiple classes implementing the same interface, similar to how many cars have the exact same layout for the driver.

So instead of letting the class define its own interface, we create a separate interface, which is often called a "contract", i.e. a list of requirements that a class needs to fulfill if it wants to correctly claim that it implements the interface.

When we have that separate interface, we can then have our classes (however many we want) implement that interface.

To a layman, most cars nowadays seems to be exactly the same, mechanically speaking.If that's how you feel, then the above example doesn't really showcase the power of interfaces.

So I want to take the time here and show you how an interface allows an object to fulfill the same contract but have a completely different implementation:

This Horse and Donkey are dramatically different from a BMW318, yet they still can be operated using the same instructions.

Now that we have these examples, let's showcase the power of an interface in action. The below code works exactly the same for every implementation of ICar:

This is the power of an interface. We're able to define interactions with an object without even knowing what that object is (is it a car? is it a horse? is it a donkey?). The only requirement we have is that all possible objects (BMW318, Fiat500, Horse, Donkey) correctly fulfill the interface that we defined.

Your interpretation of an interface

I think that what you're intending to say is correct, but the way you are saying it is ambiguous and leaves your words open for an interpretation where it is not correct.

While it is true that the interface is a separate "thing" in the codebase (which we often refer to as an "abstraction layer"), it's often better to think of the interface as being part of a given implementing class (e.g. Fiat500), because the class owns its implementation of that interface.

When we're dealing with an object, e.g. a Fiat500, then the best way to think of it is that the Fiat500 is an ICar, not that there's a separate ICar interface.

The origin of the word interface is quite old since it would date from 1874. Its latin roots mean:

In component-oriented software in general, and in OOP in particular, the boundaries are defined in terms of what is visible to the outer world for interacting with the component, as opposed to what’s purely internal to the component. The term “interface” was hence naturally adopted by the community.

When James Gosling designed Java, based on C++ roots, he inntended to keep it simple and less error-prone:

This lead Gosling to create a new language construct, and the term interface was then quite natural and obvious.

Edit: As Jörg W Mittag points out in the comments, it appears that the feature was not completely new but borrowed from Objective-C's protocols. This doesn't change the explications about the origin of the naming: the interface is the more widely used concept in OOP community. You can for example see in this this 1988 article of the popular DDJ magazine that "interface" was even used to make the term "protocol" in an experimental OOP language more understandable.

Another word for interface is protocol: The way by which two or more things are to interact.

In essence both of your definitions are correct, and indeed have been implemented in that way across different languages/runtimes.

But these are probably not why interface is the used keyword. From what I can find on the issue it appears Java borrowed this from Objective-C, although there are numerous older languages that use either the keyword interface or describe a similar keyword as an interface, such as abstract objects in C++ that have no implementation/data members.

An interface is the part of a system you interact with.

It should be well-designed (easy to use right, hard to misuse or abuse, reasonably easy to implement and test), and well-specified (fully documented, separately from any potential implementation). The importance of having/making good implementations for inspiration and evaluation of the design should also not be underestimated.

Every class consists of an interface, and its (hidden?) implementation.

As an interface in Java only consists of the interface part of a class *, and not also the implementation, that's probably why they chose the name.
Also, it's catchy, and marketing is king.

* Default implementations weakened that though.

Not the answer you're looking for? Browse other questions tagged java terminology interfaces or ask your own question.

1
Why have separate keywords for 'extends' and 'implements' in Java?
-6
Why are interfaces in Java called that way?

7
Why does Java allow to implement different interfaces, each containing a method with the same signature?
5
C++ class with only pure virtual functions: what's that called?
111
Why were default and static methods added to interfaces in Java 8 when we already had abstract classes?
7
How to force "program to an interface" without using a java Interface in java 1.6
3
Why 'List<E>' is an 'interface' but not 'abstract class'?
2
What can I use as an alternative to protected interface methods in Java?