UML Deployment diagram, what does the deploy dependency mean?

When a deployment diagram shows an artifact deployed on a node (with either the deploy dependency arrow or one of the alternative way to draw the relationship).

Here is a graphical representation of the two options, from page 659 of the UML 2.5.1 specification: 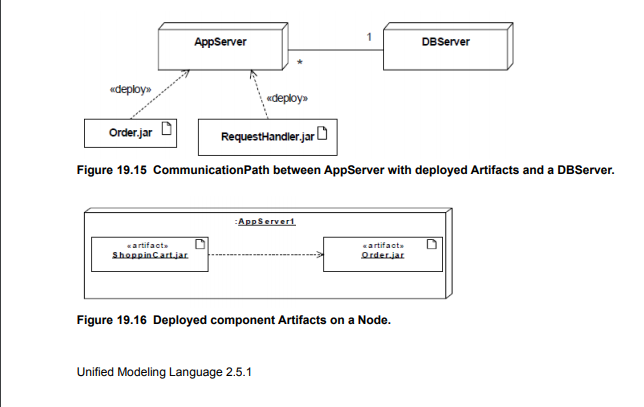 In both cases, the artifacts have been deployed onto the node.

Typically, I've shown multiple executions of a specific artifact in the textual description around the UML model. There may be other ways of doing it, such as multiplicity on the <<deploy>> relationship or including multiple instances of the artifact within the node, but I've found that these get confusing to readers. Simply showing that an artifact lives on a node and providing other text or tables around the number of instances is more straightforward.

1
Appropriate UML diagram
1
UML, Dependency, and Martin Fowler's Data Mapper Diagram
9
What does the arrow mean in a Class Diagram?
2
In UML, can a component be placed inside a node?
2
What does these UML diagram arrows mean in Iterator pattern?
3
UML Sequence Diagram
4
Best diagram to show relations between several applications
3
What does the UML symbol with a cross inside a circle mean?
0
UML dependency in a UML deployment diagram with two arrow heads
1
SysML correlation with Deployment View (UML deployment diagram)