We are introducing events to our system (I would hesitate to call it 'event sourcing', but we have started down this road). To do this we are still maintaining the same HTTP public 'CRUD' API's, but on each mutation request (POST/PATCH/PUT) the server(s) will now create an event and post it to an 'event store' service. We are wondering whether a service receiving a request should update its local data first then send the event, or send the event and, having subscribed to the event store service, only update its' local data when it receives the event back?

Here is what currently happens: A POST request comes in to API 1 and it updates its' local data then creates an event.

API 2 is listening to these events as it needs to update its data accordingly. It receives the event and it updates its data. Great! It works quite nicely (We are also enjoying having this log of all 'mutations' in one place - great for debugging).

If we make API 1 subscribe to the event, rather than directly update its data, I can think of the following advantages:

Thanks for any ideas!

(I should also note that while my examples only have 2 services in play, in reality we have a number of simple CRUD API's, each managing their own data and sitting behind an API gateway. Until introducing events, we were simply calling API's directly from one another, which has become difficult to manage/debug/maintain)

In picture form, here is what we currently have, with API's updating their data then posting an event: 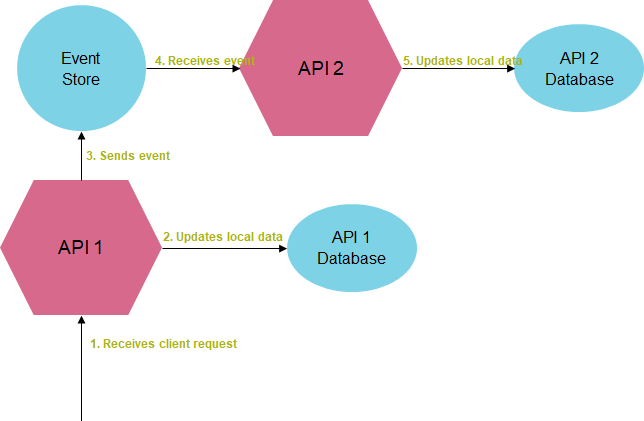 And here is what we are considering, with API's only updating data in response to events: 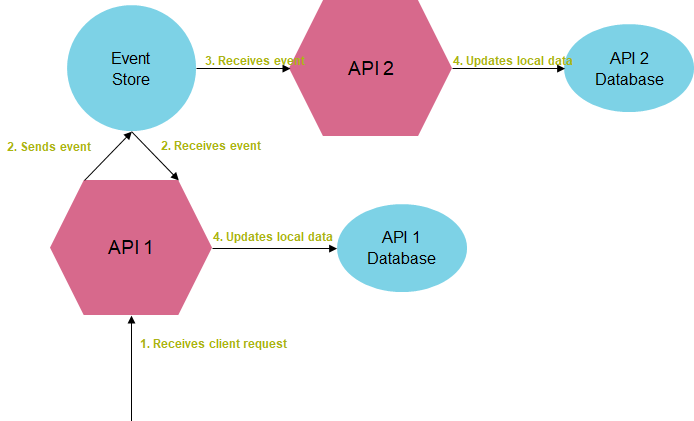 The usual answer is to pay attention to your failure modes - what happens if we power down the service, erasing all of its transient memory, at the least convenient moment?

We want to make sure that information is durably stored in the book of record first (so that it is available after the restart), and then you let all of the side effects happen. The argument here being that if you have captured the information, the side effects can be reconstructed.

A common pattern, especially in relational data stores, is to store events in the "same" database as the book of record - you update both the book of record and the list of events in the same transaction. That's fine, because there's no room for a fault in between, so you don't run into the consistency problems you might have if the events are written "somewhere else".

(When you get into event sourcing, the list of events is the book of record, so you are good to go).

Not the answer you're looking for? Browse other questions tagged microservices event-sourcing event-programming or ask your own question.