Design with subclasses being aggregates of classes implementing interfaces

I have modelled a class structure, where subclasses Rectangle and Circle inherit from an abstract superclass Figure. All subclasses share an interface IGeometry that provides for getArea() and getPerimeter() and needs a different implementation for each subclass. Several concrete classes hold the respective methods, e.g. CircleGeometry: 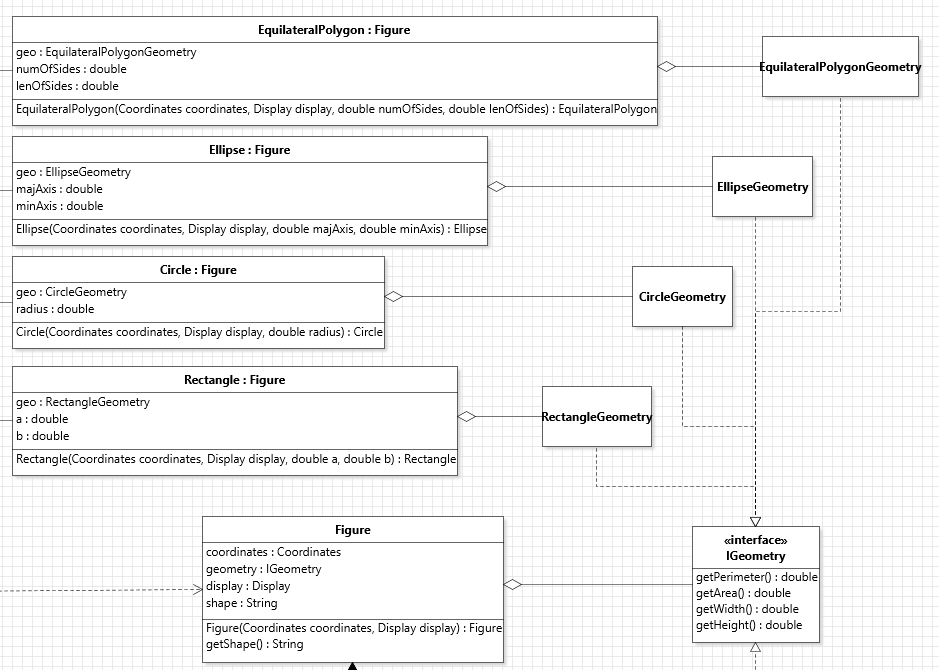 For example the class Circle now inherits from Figure and has a CircleGeometry as an attribute.

What is the most reasonable way to model this relationship?

What if the implementing classes are abstract, and the methods for calculating area and perimeter are static?

What is your design intent ?

First of all, your overall design is very close to a the Bridge design pattern, with Figure being an abstraction, and the IGeometry implementations the implementors:

Is this really what you want? This great flexibility comes at the cost of a great complexity with lots of boilerplate code that forwards in the abstraction calls to the implementor, and the risk of over-engineering when drawing the frontier between the abstract-abstraction, and its abstract-implementation.

GoF is clear: if there's only one implementor (i.e. in your case, each figure can always have one), then it's "a degenerate case of bridge pattern". So think twice before going that way: it could be a lot simpler if Figure would be an abstract class and each kind of Figure would just have to implement the IGeometry interface directly.

How to express it in UML?

Besides the association, aggregation and composition relations, UML also has a general dependency relation, which is shown as a dashed arrow with an open arrowhead (and often a stereotype indicating the kind of dependency).

Assuming there is a reason why the Geometry hierarchy can't be merged with the Figure hierarchy, I would probably draw it as a composition between Figure and IGeometry, and then a <<creates>> dependency between the concrete figures (i.e. Circle) and geometries (CircleGeometry).
This implies that after creation the concrete geometries can only be used through their interface, so you can't have circle-specific methods in CircleGeometry.

If the Geometry methods are static and you never instantiate a Geometry object, you can model that with a <<uses>> dependency.

The interface should serve as a common type for figures. You want to be able to treat a figure as an IGeometry. With your implementation you cannot do that, in order to call an IGeometry method you need to know exactly what figure you are dealing with and then use the figure-specific implementation of IGeometry. This is useless.

IGeometry methods need to be implemented directly in the figure classes and the abstract Figure class should declare to implement IGeometry. Then you will have gained something: you can call IGeometry methods on a Figure type without knowing what figure you are dealing with.

110
Why were default and static methods added to interfaces in Java 8 when we already had abstract classes?
11
What is a good design practice to avoid asking a subclass type?
0
Overriding methods with stricter signature
5
A problem of decoupling