I am trying to migrate an SVN repository that was formerly 2 svn repositories (but within the same svn server, so sharing commit numbers), which was then combined.

The per repo history ends up looking "interesting" but the per file history is preserved in svn (and svn annotate works perfectly).

When attempting to move this to git using git svn git behaves as if these files were first created at the point the 2 repos were combine and loses any history from before then. This is arguably not unreasonable as this is when those files entered the repository, but in git terminology it is perhaps "two forks that forked when no work had been done, remained separate for several years then merged"

My problem looks similar to How can I clone an svn repository that changed layouts with git maintaining full history? however my case seems worse, as I have 2 competing repos being combined, rather than just a structure change.

Assuming you still have the 2 svn repositories you can git svn clone them into 2 separate git branches and then merge them in git.

This would completely preserve history as you've always got the original branches. You'll have a 3rd branch with the merge.

git svn clone works by checking out each svn commit in order and then creating a matching git commit. The history should be the same as whatever repo you've cloned between svn and git. If you already foo-barred the merge in svn and don't have the original repo, you might be stuck, but that's svn's fault, not git's.

Sevenseven's answer was an extremely good starting point, but I needed a few extra steps to get the full solution.

Determine the SVN revision that occurred just before the SVN repositories were merged (for the example we'll assume pre rearrange history of 1-100, rearranged at 101-105, post rearrange from 106

For each of the original svn repositories pull their changes

The folders will be empty this is fine. The import takes AGES and the next step is destructive, so I suggest taking a backup of these repos.

Add a subfolder to mirror what happen in SVN

When the histories of these are rearranged from 2 repos to 1 they will be within a subfolder in the single rearranged repo. So this subfolder can be added using filter-repo. This isn't part of core git and must be installed.

In my example [SUB_PROJECT_NAME] would be project1 in the first repo then project2 in the second repo. The important thing is to mirror whatever happened in SVN

Smoosh the repos together

In git terminology what you are doing is merging forks with unrelated history, in SVN you were rearranging several separate repositories into just one big one.

Next create a new (third) repository, name it whatever your overall project is called followed by _preRearrange, I will call it overProject_preRearrange in this example.

For each branch check it out

And then merge its composite parts into it

At this point the term "preRearrange" may seem incorrect. But they contain the history of all the commits which happened preRearrange, even if the merging of the forks has happened

This will be a shallow history, appearing to begin at the point the rearrangement happened, don't worry about that.

By grafting these 2 repositories together you will get a continuous (if unusual) history.

Open a cmd window in the preRearrangement

Add the postRearrangement repository as a remote

For each branch you want to stitch together (any that have changed since the rearrangement) determine the first commit in postRearrange after the rearrange was fully complete in that branch (i.e. the first normal commit). And the last commit in preRearrange (this will be one of our merges)

The preRearrange repo is the one you want to ultimately keep.

Check its all good

At the end of this process you should have a continuous history (and a lot more git experience), you may want to do some sanity checking before declaring yourself done.

Look at the history of your grafted branches, they should look like this: 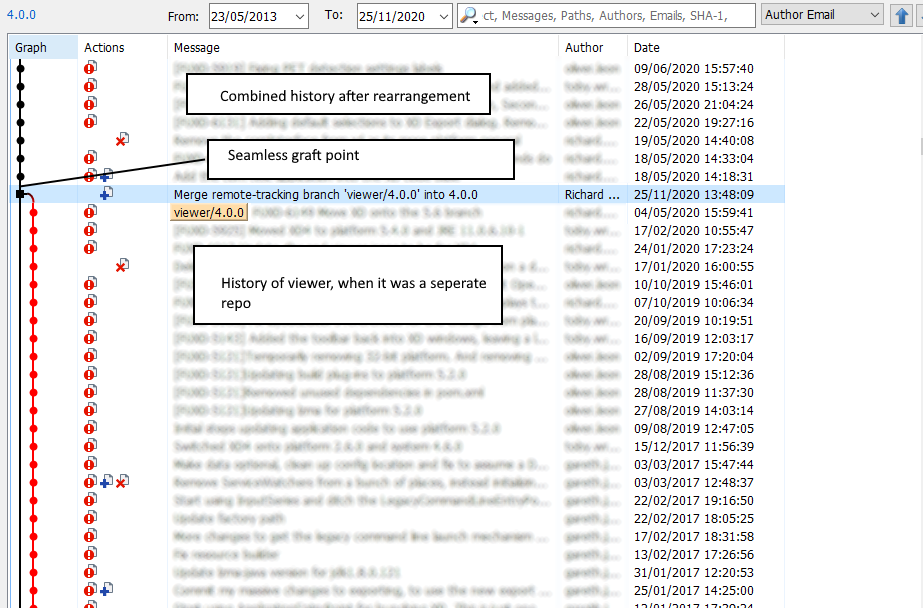 5
How can I clone an svn repository that changed layouts with git maintaining full history?

44
Should a github maintainer rewrite author's in pull requests?
5
How can I clone an svn repository that changed layouts with git maintaining full history?
2
Scaling up Git to Team Usage
25
What to do about large svn history when moving to git?
5
Branching a subdirectory while keeping commits from other directories
0
How to robustly identify obsolete Git branches
5
What to do with historical SVN branches after switching to GitFlow?
4
Working with maven and multiple git repositories
8
Should frontend and backend be on separate GitHub repos?