Imagine you're in a Python setup, with all of the projects you're working on. Now, as a base line, you have a Python module that is the backbone (backbone.py) to everything when it comes to getting data from a datasource. There is also a FastAPI implementation of this this backbone (backbone-api.py), offering a handy way of getting the data out.

Now, there is another project emerging, which needs to use the data of the backbone. Also implemented with python and FastAPI (different-angle.py). Pretty much just a different angle of the data.

There appear to be two options:

Option A: Importing the backbone module directly into the new project, to allow direct access to the data and best performance.

Option B: Using the FastAPI implementation of the backbone, to simplify the process, but at the cost of latency.

To my mind, Option A seems to be slightly better. This is mostly as this will increase performance and leverages Python modules better. Option B has the advantage of being an easy setup, as you don't need to install the backbone module and its configuration. This is probably also fine for smaller operations, but Option B would probably have some disadvantages when it comes to returning larger amounts of data. 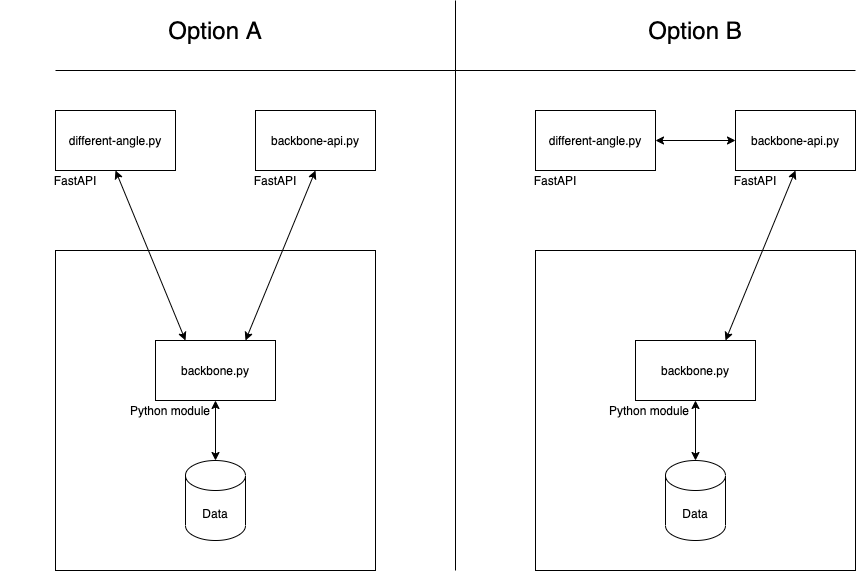 A few things to consider whether to directly import the backbone or use the API layer.

If the API layer performance is so bad that you cannot go through it, then there is no need to read further, you go ahead by importing directly (I would still recommend to try and solve for performance issue).

I would recommend having a uniform way of accessing/importing modules. If backbone.py is an external module, it is better to decouple the dependency from your module and hence use the API. If it is a third-party module you should definitely consider using the API layer and stick to the contracts rather than doing a direct import.

If you are the sole owner of the backbone module, not a lot of other places where this module is imported, and performance is your priority - then you go ahead with direct import and have your decision documented.

Not the answer you're looking for? Browse other questions tagged architecture python microservices or ask your own question.

6
What's the best way to create a static utility class in python? Is using metaclasses code smell?
26
Python - 'if foo in dict' vs 'try: dict[foo]'
13
Why is flask CLI recommended over Flask.run?
0
How to structure Python modules so they are accesible from different submodules
0
Is microservice approach always best fit for ETL processes?