What information should a Game Piece hold?

In an OOP design, suppose I have some board type game that has pieces, such as chess, checkers.

In you opinion, what properties should pieces of that game board have?

imo, I feel like the pieces should only contain its respective rules, e.g. it can move like this, and it can do this. The issue I see with this is that, it would require a lot of data passing via arguments, A piece can only know how it is supposed to move if it knows its current location, and maybe location of other pieces etc. This list can become extensive the more dependent a piece is to the state of a game, this is what makes me nervous.

Assuming, I have proper singleton access of the board, the alternative is to let all pieces have access to the entire board instance, and also store data about its state with respect to the game (like its location). This way No arguments need to be passed. is this bad to do?

This way No arguments need to be passed. is this bad to do?

We pass arguments for a reason. They show dependencies explicitly. They make code more readable. They make change easy. Global access is rarely a better alternative.

A piece can only know how it is supposed to move if it knows its current location, and maybe location of other pieces

Who said a piece needs to know all that? What makes a queen a queen isn't where she is or the other pieces on the board.

What the queen needs to know is that she's a queen and her color. Everything else changes so just let something else tell her that other stuff.

Done this way the pieces are immutable. This code doesn't know which piece it's looking at. But it tells the piece what it needs to know about the changing world right now to prune it's move list down to what's legal now.

This follows a principle that says: separate what changes from what stays the same. Yes it means passing stuff but so what? It keeps the pieces clean and immutable. You can model the game with 2 objects of each kind of piece, one for each color. And just reuse their references when you need more than one piece of each kind. You can pass them their color when you construct them.

You'll also want a null object piece type to represent blank squares. One that produces no legal moves and that anyone can capture. Well, except for pawns moving diagonally.

You can use piece types to handle the stranger rules of chess. You can do castling with a CastleKing and CastleRook that leave a moved King and Rook behind after they move. En passant can be solved if Pawns leave a PawnTail behind them when they double move. When captured by a Pawn a PawnTail removes the pawn in front of it. Just remember to remove all your PawnTails before you start your turn.

The goal here is to model the state of the game with the board. But this only works up to a point. Spotting that a move offers a draw due to repeated position absolutely requires more than board state. It requires knowledge of board history. A HashMap may prove useful.

Done this way it's all very OOP and polymorphic. But most importantly it creates a place in the code that doesn't care what piece it's talking to.

In case you're interested, I've talked about chess before.

It's generally a mistake to try and encode game rules as objects. They tend not to follow any structure which is amenable to generic patterns.

For Example, you may think that in chess all pawns can move forward 1 square. But immediately you encounter an exception,

OK you solve that, but then

OK, we can maybe pass in the positions of other pieces and work out of any occupy those squares. Maybe we need that for taking in the general case anyway.

OK so now we need to keep track of whether its the first move or not.

OK so now we need to know the move history of the piece its trying to take.

That's just the pawn and chess is a fairly simple game.

With these types of games you are best of considering them in game theory terms, ie you have Players, who take Actions, after each Action the active player may or may not change, you have set of rules which consider the entire history of Actions in the game to evaluate possible Actions and if the game has ended etc.

For example chess games are recorded as the sequence of moves

On each turn a players possible actions break down in to moving a piece, offering a draw, resigning, accepting a draw etc or maybe no possible action, which would indicate the end of the game

moving a piece further breaks down into the list of pieces. Each possible move is a function of the previous moves, which defines the state of the game.

You do need to keep track of the pieces, but perhaps you are focusing on the wrong object.

Try thinking of it as a board.

You can still expose "pieces" as individual objects, but these are flyweights like an iterator is a bookmark into a container.

I assume we're talking chess here, at least for the sake of example.

Anything that requires knowledge between individual pieces, or between a piece and its environment, is clearly not limited to a given piece's personal scope, and therefore is likely to be orchestrated by its parent (Board in this case).

A piece can only know how it is supposed to move if it knows its current location,

That's not true at all. I think you're getting confused here by tying relative movement and board coordinates together as an inseparable whole. They both factor into calculating a valid move set, but they are separate steps that can be undertaken by separate actors.

A piece is perfectly capable of knowing how it can move relative to its current position. Simple example: 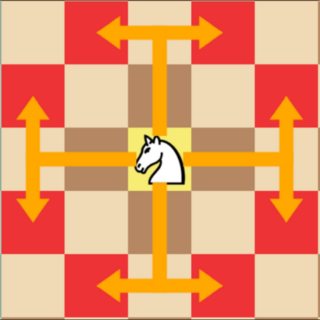 This diagram explain the transformations (moves) that a chess piece can make, but it does not rely on any board coordinates. It explains the movement relative to the starting position.

You could develop a system where the pieces only communicate using relative coordinates. I.e. the piece tells the board "I can move two cells to the left and one down", rather than "I can move to C4". This wouldn't require any input at all, this knowledge is perfectly encapsulated by the piece's internal logic.

The board, after having received these relative coordinates, could then translate them into actual board coordinates. The board knows that the piece is currently on E5, so it can calculate that "two cells to the left and one down" means C4.

However, at least for boardgames with a restrictive set of tiles like chess, it's usually easier and clearer if you always use your board coordinates, and don't implement this relative coordinate system.
If you wanted to be able to express those target cells using coordinates, I would need to supply you with the coordinates from the starting position. If I told you that the knight was on E5, you could figure out that the target cells are C4, C6, D3, D7, F3, F7, G4, G6.

This means that we already have a good idea on how to implement this logic:

and maybe location of other pieces etc.

I refer back to the diagram:

You're right that if there were e.g. a white pawn located on one of the listed target cells, that this move would not be valid.

But I also refer back to my initial paragraph: an object only knows itself. Therefore, if a piece tells you its valid moves, it doesn't yet account for other pieces on the board. That is a secondary calculation you have to do on top of it.

Think of it this way:

You'd expect something along the lines of:

I've glossed over some of the details, because I wanted to highlight the main point here.

The board is the one calling the shots. The piece itself only says where it could theoretically move to. It is then the board's responsibility to further check those potential destination cells to see if there is anything about the game's state that would invalidate it as a valid destination.

Assuming, I have proper singleton access of the board

As a basic example: what if your chess software allows players to play multiple games concurrently? Then you have more than one board. There are many more reasons to not do this, but this is a very straightforward reason.

Secondly, you don't really need a singleton here. What you're trying to achieve sounds more like static access, which is an even worse idea in an otherwise OOP scenario.

This way no arguments need to be passed. is this bad to do?

I can't claim that it's impossible to write software using statics, but it's highly undersirable for many reasons. The entire purpose of OOP is to not be static. It brings with it many benefits, but it does come at the cost of needing to pass data between instances.

Rather than avoid the thing you're not good at, I suggest you use it; and you will learn to use it well. Don't avoid it just because you don't fully get it right now.

3
What programming paradigm do you think would work best for the AI aspect of a chess engine?
0
Object Oriented Design for chess

1
Designing an easily extensible XML driven OOP system
24
What's the proper way to model this real-world activity that seems to need circular references in OOP?
13
Clean OOP way of mapping an object to its presenter
12
Can we really use immutability in OOP without losing all key OOP features?
2
Object Oriented Game Programming Board Class decision
2
How to design different moves of different pieces of a Chess game using OOP principles?
1
Design Chess - Object Oriented Design
0
Object Oriented Design for chess