There are n x n cells, and each of them is getting compared to (n - x1) * y1 + x * (n - y1) cells. This gives an overall time complexity of O(n^4) and is making my algorithm very slow. Can you improve the scalability of this algorithm?

I apologize for initially missing the additional requirement aside from just sorting values. I think the requirements are still a bit unclear but based on the code and visual plus some assumptions, think I mostly follow.

Essentially each cell has two areas that it can 'dominate': the submatrix where it is the bottom-left cell and the one where it is the top-right cell. We can define this behavior in a class Cell (which I think is better name for this than Pair) like so:

Now that we have that defined, the algorithm follows easily:

Now, it's been a while but the complexity for the two steps (m=n*n)

The filter complexity is based on the fact that you cannot have more than N results in the output (which I'm fairly certain is true.) If I'm not mistaken about that, you can exit the filter loop once the results are of length N. You might also be able to get fancy around keeping track of non-dominated cells. Once there are no more unoccupied, non-dominated cells in the results, you are done. These don't necessarily change the O-time but can have impact on the actual performance of a real program.

If you think I've made an error here or have questions, let me know.

To address Helena's comment about keeping only two dominating cells, here's an example matrix which I think shows this doesn't work in general: 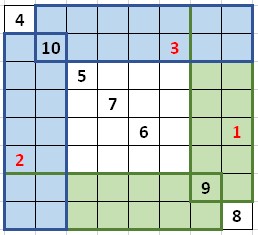 The above shows the state of the filter after the first two dominating cells are found. We can see there are 3 areas still free, including a 4X4 middle area. By induction if we can create empty sub-matrices, then these can be further subdivided as well in the same manner which can be seen once the 7 cell is handled. There's some upper limit to the number to this for any given N that, if generalized, might be potentially useful for optimization.

The following algorithm recursively computes the result by finding the maximum element in the current matrix, then subdividing in two sub-matrices (just like in Helena's answer) and repeating the same calculation on both sub-matrices. The results are collected in a list, which is sorted at the end.

The following snippet is pseudo-code. It resembles Python, but you'll still have to adapt it to make it work.

First, whenever you pick one maximum, you remove the whole row containing it, so you cannot ever pick two maxima in the same row, so you can pick at most N values. This means the execution time would be at most O(N^3). Unfortunately, this just improves your estimate, and doesn't do anything to the actual time.

Here's what I do: For each row, we start by finding the maximum, and recording the maximum, its index, which range was searched (1 .. N), and which range should have been searched (also 1.. N initially). We put these six values into a struct, and put it into a priority queue. The "range that should be searched" gets changed every time we pick a maximum value.

How does this help? When you find a new maximum value, you do very little work, just updating at most N ranges. There is a good chance that the next maximum is still not removed from the search, so you can find it quickly. You only need to do extra work for rows that contained the largest remaining value, which is now excluded. I don't think it reduces the worst case, but it will reduce the time for typical cases a lot.

PS. If only one percent of the entries are non-zero, then you obviously store the indices of the non-zero values in each row first, which will reduce the time looking for the largest value in a row by a factor 100.

Algorithm, assuming we are only interested in maximum values > 0:

How long does this all take, assuming each entry is nonzero with the same probability p? The initial setup takes O(n^2) steps. Every time we process a maximum we change up to n rows, total O(n^2).

Re-calculating a row maximum reduces the number of entries to be considered in the row by 1, therefore this happens at most pn^2 times and takes at most pn steps, for a total of p^2 n^3 steps. In practice this happens much less often because we only do this if the previous maximum of the row was found in an excluded range, and is larger than the currently highest value, and because finding a new maximum can substantially reduce the number of points that need checking, often by half.

PS. I implemented this in C++ and tested it on a full 10,000 x 10,000 matrix. I counted how many comparisons are made to calculate the maximum of a subrange of a row. The number was never more than 1.01 n^2. n^2 comparisons are needed to find the global maximum, and less than a million comparisons in total on top of that. Runtime < 1 second. Setting 100 million values using arc4random() took significantly more time than that.

How do you make something more efficient?

Regarding doing less work: instead of 'x'ing out boxes and rescanning the whole matrix, handle only what's left after finding each max.

Each found max subdivides the remaining space into two smaller spaces, which can be handled independently of its larger containing matrix.  (And what's more, you're already basically computing the corners of these two smaller spaces.)

Regarding better organization: apply @JimmyJames suggestion to scan the matrix only once gathering all values into sorted order; then while traversing that sorted series, track the subdivisions of the space, which are then used to tell you whether or not to allow/output the next element in the series.

Coding left as exercises for the reader.

Not the answer you're looking for? Browse other questions tagged algorithms python performance complexity algorithm-analysis or ask your own question.

4
Magic square check for N×N matrix with minimum complexity
1
need explanation on amortization in algorithm
6
Matrix Pattern Recognition Algorithm
5
random unique pair numbers from two range
0
Traverse a matrix using a linear index to get an evenly distributed values sample
1
What's the big-O complexity of this recursive algorithm?
0
Algorithm for matrix positioning
2
Algorithm to limit the speed of processing items
20
Using a different algorithm depending on the size of the input