All the properties of a domain object should support NULL value?

Imagine you have an application with the domain object User:

Your application has 3 views:

So I would call 3 different queries on my db:

The problem is when I map the result of the queries to a User object:

These data are not correct, they've simply set to their default value. So what should I to do?

Which is the best solution?

Loading always all fields is the solution which requires probably the least amount of programming effort (since only one query is required instead of three; ideally that query could be generated by some ORM tool). It will also avoid a lot of hassle when the application will be extended to use the loaded ´User` objects for further processing.

Note further that performance-wise, the saved time and memory overhead of querying and storing 3 instead of 5 columns is usually negligible in most real-world applications (as long as non of those additional columns contains some very large binary or text field). So I would heavily recommend not to optimize anything by leaving out columns when you don't have a real, measurable performance or memory bottleneck.

For the (rare!) case where partially loaded objects would actually be required in this application for performance reasons, I would heavily recommend against using nullable datatypes to represent the missing columns. In case some of the columns in the user table allow NULL values, one will not be able to distinguish values which are NULL at the DB, or those which were not loaded from the DB. Better find a way to represent the meta information which part of an object was loaded in a different way, or find a way to make this requirement obsolete.

This may be oversimplified advice, but it really boils down to the essence of clean coding: do not create multi-tools. It's what I like to call the Swiss army knife principle: 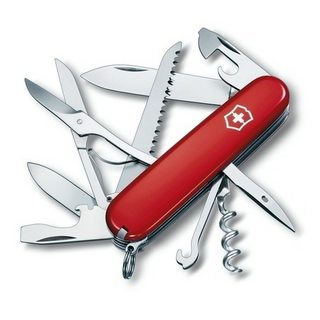 It's the classic multi-tool, but it's not a great solution for multiple reasons:

This part of the analogy carries over to the field of software. Compromises due to shared design, a single point of failure, ... these are all problematic design approaches.

So why was this knife designed, and still so popular? Because it's easy to carry, and it's considerably harder to carry each individual tool in your pocket at the same time.

But this part of the analogy does not carry over to the field of software. We can build as many classes as we want without struggling to carry them all around.

So let's avoid all of these design issues, since we're not actually solving a problem by trying to mash all of these functionalities into a single class. One class, one tool. Another tool? Another class.

Each view should have its own model, which means that you can tailor each model to specifically contain what it needs, regardless of what another view needs.

The short answer here is to have 3 user DTOs, one to fit each view.

But you seem to want to reuse the same User. That's actually okay too, but only if the User DTO is always the same, i.e. contains all of the data that you've put into the class definition. You've already touched on this:

This approach is much easier to develop, but you're right that it's slightly less performant in terms of database bandwidth.

You have to weigh the loss of bandwidth by loading some data you won't use against the complexities of developing separate DTO classes, mapping all of them, and making sure that your repository interface is still clear enough so your consumers can receive the right type of DTO they need.

This is also very sensitive to needing to be expanded. If tomorrow you have a 4th view that showcases a user, it's likely going to need another subset of data fields, and thus a 4th DTO, mapping, and repository method. But if you had been using a fully fleshed out User class, you could've reused it for the 4th model since it already contains what you need.

Which is the best solution?

As with most software development issues, there is no one-size-fits-all solution.

If you have a highly trafficked application (let's say Facebook or Twitter) and a significant development budget, those little data optimizations are going to save more than it costs to develop them.

But if you have a smaller development budget and you are not squeezed for performance to this degree, then you have more freedom to waste tiny bits of performance in favor of a much simplified development approach.

As long as the data in question comes from the same table row, without any additional joins or calculations, the cost of adding it is negligible for performance (assuming sensible data columns, not outliers like a giant BASE64 string). When the data is fetched via additional joins, it's usually better to simply fetch this data in a second query than it is to try and develop two queries, one with join and one without.

So you have a class User with five properties, and depending on the context, one or more of these properties are not set. That is just asking for trouble. Because you can pass a User object with some properties set to a method needing other properties. You need forever keep track of which kind of User object you have.

A bad solution (but better than what you have) is having three classes, each containing only certain properties. At least the compiler can tell you when you get it wrong. If you think this is bad, what you have now is worse.

A very simple solution is to always set all the properties, so when you are given a User object, you always know what you’ve got.

If there are properties that are expensive to set, have a Boolean whether the property is set, a getter that automatically sets the property if it’s not set.

Everytime I need users data, I load all the fields, even the ones I don't need. The problem of this solution is the waste of time and memory.

Never worry about waste until you have actual numbers in front of you showing that it is making users unhappy.

I've worked on many systems with ORMs that, by default, load all the fields of a database record into the in-memory object. These ORMs do provide facilities to "trim" some of the un-needed fields from the query, but in these systems, it was almost never used. The overhead of the extra fields was, in the overwhelming majority of cases, negligible compared to everything else that was involved in the query. In the cases where we did need to optimize past it, we would skip the ORM entirely and write raw SQL queries. (When optimization is justified, it trumps having a beautiful architecture.)

All your problems arise from the decision to have data structures instead of proper objects. Because a data structure has no idea how it will be used, it is forced to be generic and conform to each use-case, some of which may even have contradictory requirements. In addition you are also forced to make it work for persistence too.

Short tips how to avoid this:

Edit: Here's how that might look like. Knowing nothing else of your specific case, and assuming it has some sort of UI, also assuming you want to show those things in some sort of UI component:

If your requirement is to show those tables on the UI, that is the most direct and easiest way you could go.